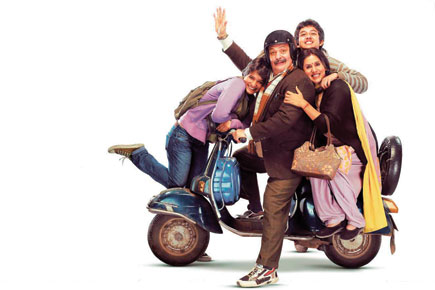 
Niether is Do Dooni Chaar original, nor can it boast of engaging treatment, but for ambience, casting and performance, it is ‘numero uno’. Or in the lingua franca of lower middle class Delhi, where it is set, ‘best hai ji’.

Income and expenditure are perennially at odds in the Duggal household, and when a sister from Meerut insists that they drive down for a family wedding, but for God’s sake not on his run-down scooter, Mr Duggal’s guard goes up. He is a Maths teacher at a school and makes ends meet, as all teachers do, through tuition and coaching classes. A car is beyond his budget and he will not hear of it.

But the pressure of consumer culture, via his wife, son and daughter, eventually wears him down. He borrows a car from his neighbour for the Meerut trip, but the petit-bourgeois reverberations from that unnerving experience make him succumb to the absurd notion that without a car, his status is permanently undermined.

What prevents this movie from turning into a sitcom called ‘The Duggals’ is an astonishing performance by Rishi Kapoor as the teacher. Naturally gifted with innate timing in body movement and dialogue delivery, most of his performances have been instinctive. He has rarely needed any direction and a lot of the characters he plays are his own interpretations.

But surely here, in Do Dooni Chaar, he would have had to work hard on creating a character from a precise socio- economic bracket. Not only does he do that successfully, but he also rotates the strike, which means Mrs Duggal (Neetu Singh), daughter (Aditi Vasudev) and son (Archit Krishna) function as family and team, making the whole thing more believable. Together they poignantly present the material indignity of a teacher in a society that praises the vocation as noble, even as it treats the individual as dirt.