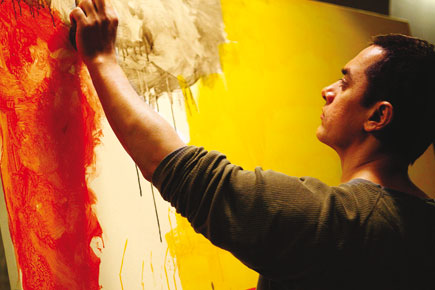 Senses of cinema are varied, and thank God for it. The sense and sensibility you see in Dhobi Ghat is discern­ing and respectful. The director uses the multiple-narrative, not as a clever plot device, but to present an egalitarian view of people living in a city, a me­tropolis of close physical proximity but remote material existences.

In one scene, Shai, a well-to-do banker and passionate photographer, is sit­ting in her elegant sea-facing apart­ment talking to her dhobi and planning a series of photographs on his working world. She asks her maid, Agnes (Norma Lobo), to serve them both tea and the maid turns up with a ‘cutting chai’ glass for him and a ceramic mug for her. Shai (Monica Dogra) is embar­rassed, reverses the serving, but says nothing to Agnes.

Class tiers are ever present in the film, rarely commented on and left as wounds that never heal. What comes through is an astonishment that people  exist in a city of such rich texture yet such indifference to human sensitivity, and a tender appreciation of a few char­acters, interconnected  in the movie, who are always hurt by this apathy.

There is Arun (Khan), a painter who looks for the margins—of his city and canvas. He comes across a recording of a girl called Yasmin (Kriti Malhotra), a small-towner in Mumbai, who speaks to the camera about herself. He sees the metropolis through her; in curios­ity, fascination and then horror. Arun also has the same dhobi (Prateik Babbar) as Shai, a brief acquaintance, and these four—in film, video, photography and painting —spin loosely in the invisible web of the universe.

Shai’s photos (by Jyotika Jain) are gorgeous, used well as punctuation. Aamir has the arresting stillness of a painter in study. In all, a very impres­sive debut by Kiran Rao.