Movies that may have never seen the light of day are out and about in these days of dearth. This is one of them 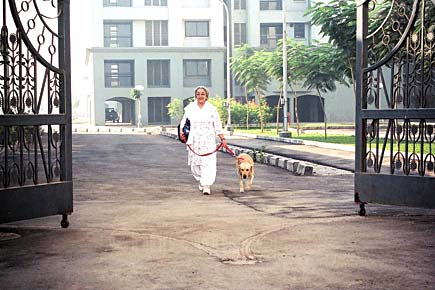 Movies that may have never seen the light of day are out and about in these days of dearth. This is one of them


The bottom of the barrel is being scraped. A film that wouldn’t be given the time of day in normal circumstances finds release. You know there is a recession on when one print of Detective Naani is being shared between South Mumbai’s Sterling and Inox theatres. The audience is kept waiting 25 minutes while the print is transported from one theatre to the other.

Apart from Ava Mukherjee, a familiar face on TV advertisements, no one acts in the film. All they actually have to do is be themselves, but such is the influence of pop culture on the idiot box that they try to be the morons they watch in commercials, news channels and soap operas. When expressing amusement, they guffaw till their jaws unhinge, wonder makes their eyes bulge, fear makes them vibrate like the alert on a cellphone ring and empathy turns them into touchy-feely creatures desperate to put a grubby arm around a reluctant victim’s shoulder, national news reporter style.

Detective Naani (Mukherjee) violates all the rules of a housing society. She trains powerful binoculars on the open windows of her neighbours, knocks on their doors at unearthly hours and trots off to the local police station when she suspects foul play in one the flats.

Sure enough, a child kidnapper is doing business in her housing society. Does she inform the society secretary or chairperson? No way. Like the Jimmy Stewart character in Hitchcock’s Rear Window, she deals with the villain herself, with a few young assistants doing a search and keeping a look-out.

There is a thin pink line between a voyeur and a prying naani. But director Romila Mukherjee has neither the curiosity nor the inclination to make any explorations in this general direction.

What we have instead is an exasperatingly ’kiddie’ movie at a time of slim pickings. Everybody certainly does not love a good drought.