The film’s plot is completely corny. Surprisingly, though, it works 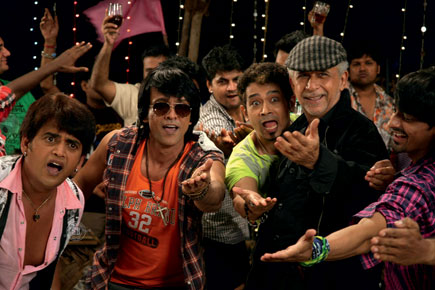 The film’s plot is completely corny. Surprisingly, though, it works


We’ve seen this Mumbai flotsam and jetsam before, but there is some nice chemistry here. The first 20 minutes of chit-chat with cops in a police van holds your attention. The guy they call ‘Sir’ is sitting with the driver in front and is bored. The boys in the back are playing cards. On the lookout for entertainment and anxious to demonstrate his authoritative style, ‘Sir’ stops a couple returning from a party and harasses them.

It’s all an act, of course, and the nervous pair are then ticked off for not having had enough to drink at the party they were at.

The reason for this camaraderie between ‘Sir’ (Naseeruddin Shah) and the boys—Albert Pinto (Kay Kay Menon), Shakti (Ravi Kishen) and Bobby (Atul Kulkarni)—is never satisfactorily explained. Where did they meet? What do they have in common? Are they graduates of the same college ‘Sir’ taught at?

‘Sir’ is really Pankaj Suri, a former professor of English, Shakti is a drug dealer and Bobby is a pimp and hustler. As for Pinto, we are offered absolutely no idea why ‘Albert Pinto ko gussa kyon aata hai’, except that he is a car thief who has a love/hate relationship with old Fiat cars—he destroys them in order to make them unique.

The plot is so corny, it shouldn’t work, but it does. The film has this back-and-forth structure that is very well timed. As soon as one section is exhausted of its amusement possibilities, we cut to an earlier or later part of picture development. The playback facility in digital media becomes a metaphor for narrative style, and though this is common enough, there is a natural flow to Chaalis Chaurasi that is pleasing.

So, in the end, ensemble performances make up for a cliched plot. Just having Naseer around guarantees that his co-actors will try and impress—not us, but him.