Grabbing attention and coveted roles, women actors from the South are creating a national niche of their own 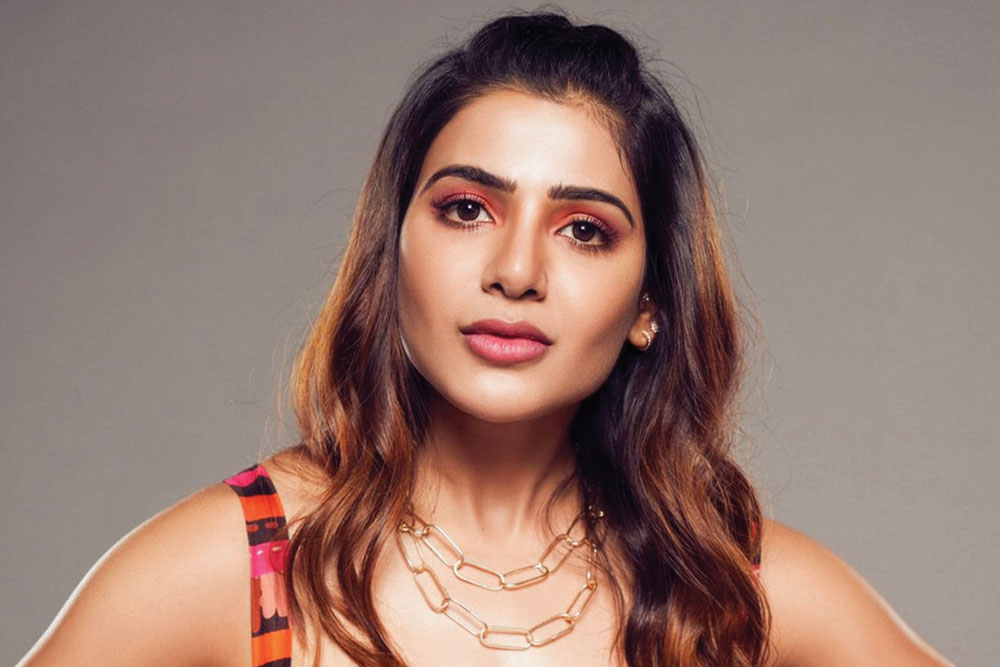 
THE TATTOO ON her right arm says ‘irreplaceable’. For filmmakers in the so-far-snooty Mumbai film industry, Rash­mika Mandanna is becoming indispensable. She played Am­itabh Bachchan’s rebellious daughter in Vikas Bahl’s recent film Goodbye, has shot Mission Majnu with Sidharth Mal­hotra, and is currently filming Animal with Ranbir Kapoor for Sandeep Reddy Vanga. So, was she, a star in Telugu and Tamil industries with sterling perfor­mances in Dear Comrade and Pushpa: The Rise, intimidated by starring with Bachchan in her first Hindi film? Ini­tially, yes. “I just went up to him, shook his hand, and said, ‘Hello, I’m playing so and so in the film. Ok, bye, now I won’t bother you anymore.’ He comes with such an aura,” she says. “But you have to be good enough as his co-star. He comes with all this experience and I’m just me, I’ve just started. That difference should not be seen onscreen though. So what can I do to match up to him?”

And indeed she did, becoming one of many established women actors from the southern film industries who are making a difference in the Mum­bai film world, while continuing to nurture their stardom back home. Take Samantha Ruth Prabhu. After stun­ning audiences with her performance as Raji, the Sri Lankan Tamil rebel in The Family Man 2, and then making a complete transformation as a siren in the ‘Oo Antava’ song in Pushpa: The Rise, she is preparing for a significant role in the Indian version of Citadel, Amazon Prime Video’s global show, even as three southern films are ready for release: the horror film Yashoda, the period epic Shaakuntalam, and the romantic Kushi with Vijay Deverakonda.


“When I came into the industry, I was uncomfortable. There were these fair, north Indian heroines. And I am wheatish, a proper south Indian. I wanted to fit in so badly,” says Samantha Ruth Prabhu, actor

Nayanthara stars with Shah Rukh Khan in filmmaker Atlee’s much awaited thriller Jawan, which releases next year, while also allowing Netflix to telecast her wedding to director Vignesh Sivan in a forthcoming special that has an all-star turnout, from Suriya to Mani Ratnam. Tamannaah, having become an icon with her role as the warrior Avantika in Baahubali, is back in Bollywood, having made Babli Bouncer and Plan A Plan B. As for Regina Cassandra, movies and streaming shows in Hindi are an opportunity to do things she probably couldn’t when she first began in the profession.

“When I chose to make my Hindi debut in 2019 in Ek Ladki Ko Dekha Toh Aisa Laga (where she plays a lesbian) everyone thought I’d lost it. But I got so much love and appreciation from the LGBTQ community,” Cassandra says. She quickly followed it up with SonyLIV’s Rocket Boys, where she played Mrinalini Sarabhai (which she will reprise soon in the second season) and Disney+Hotstar’s Shoorveer, where she plays a fighter pilot.

It’s not merely that these actors are fresh faces for the Hindi speaking mar­ket. It’s also that they are getting to play parts, which are larger in scope and ambi­tion. The southern film industries are still dominated by male actors and even fine actors such as National Award-win­ning actor Keerthy Suresh have to play a money grubbing woman with Mahesh Babu as hero in Sarkaru Vaari Paata.

“Mediocre content just won’t work anymore, especially after the pandemic. But it is about teamwork, not any one person. And it stopped being about any one language some time ago,” says Tamannaah, actor

Changes are taking place in certain cases, with movies and streaming shows making it possible for women-oriented stories to be told across the country, with Suresh playing a woman out to wreak horrific vengeance in Amazon Prime Video’s Saani Kaayidham and more recently, Aishwarya Lekshmi playing a domestic abuse survivor who turns the tables on her husband in Ammu, also on Amazon Prime Video.

NOR IS THE export of women to Bollywood a new phenomenon. Vyjayanthimala came with her grandmother as chaperone and her own dance master in 1951, rising to the very top of the ladder, setting off a stream of women who came later, like Hema Malini, Sridevi, and Jaya Prada. But most of them never looked back. This time it’s a true exchange as there is no longer a hierarchy. Audiences are embracing dubbed and multilingual movies, no matter what language the cast speaks. Much as Alia Bhatt learnt Telugu for SS Rajamouli’s RRR, Prabhu is learning Hindi to do more work in Mumbai. “I have to get rid of my accent,” she says.

There are not enough heroine-oriented roles in the south, says Prabhu. There is the social message movie or the thriller. But there is never a heroine play­ing a saviour or a hero, like you have for men, which translates into ticket sales at the box office. “It has to be an underdog,” she adds. The challenge of Hindi films and streaming services is that women can play varied characters. They are also creating greater opportunities for themselves and for others.

Sometimes they need a little push. “Actors are a product of the opportuni­ties offered to them. Until SS Rajamouli sir offered me Baahubali, I had been doing hardcore commercial cinema. I wasn’t aware of my own potential. I needed someone to help break the cliches around me. Growing up I was a tomboy, but I am also very feminine as my work demands it,” says Tamannaah.

Whether it is a 15-second video or eight-hour shows, we have to make en­gaging content whether for Instagram or streaming services, adds Tamannaah. “Mediocre content just won’t work anymore, especially after the pandemic. But it is about teamwork, not any one person. And it stopped being about any one language some time ago,” she says. Her endeavour now is to play varied characters. Do the unexpected, break glass ceilings, showcase the most honest and authentic side of her. “I want to wake up in the morning and do things I haven’t done, and entertain myself while entertaining others.” So whether it is doing a series for Amazon Prime Video like the forthcoming Jee Karda, or a theatrical release like Madhur Bhandarkar’s Babli Bouncer, she is game for experimentation.

“I’m finally getting the chances I want,” she says. Borders and boundaries are flexible. Experiences in the cinema of one language help them in another. Tamannaah says the journeys she un­dertook while shooting movies in small towns in the south made her understand India in a way she wouldn’t have oth­erwise. “They are much closer to their roots and their traditions, whether it is how they drink water (their lips never touching the vessel) or how they take off their shoes while performing a ritual. Travelling down south also helped me learn Tamil and Telugu and exposed me to the real India, which helped me in playing my characters in a more authen­tic way,” she says. It is also perhaps why many of her fans still refuse to believe she is a Sindhi girl from Juhu.

“I feel I am becoming better at my craft. I’m the country’s baby. I’m from everywhere,” says Rashmika Mandanna, actor

Mandanna works in Mumbai and in Chennai. She is constantly picking up something from whichever team she works with. “I feel I am becoming bet­ter at my craft,” she says. So where is she from exactly? “I’m the country’s baby. I’m from everywhere,” she says with a laugh.

Cassandra says it is wonderful to see the south being celebrated everywhere but recalls a time in 2015 when she almost gave up acting after making her Telugu debut in 2011. “There was an imbalance in my work and life and I felt I was being drawn into ways to increase my vis­ibility, which didn’t feel organic to me,” she says. Prasanth Varma’s 2018 film, Awe, with a women-led ensemble cast, got her back on track and with Rocket Boys, “no one knew I could do roles like this”. She acknowledges prejudice and says 35-year-old women are playing mothers to 35-year-old men and the older you are the more you are pushed into a corner. But that’s society too, not just cinema. “I know I am in the middle of that change and trying to do my bit. I want to make my own niche even if I have to get down to doing it myself,” she says. Indeed, her filmog­raphy now has an array of Hindi work plus two-handers with other women, such as Saakini Daakini and Soorpanagai. She also has films with Arun Vijay and Prabhu Deva, and a series, Farzi with Vijay Sethupathi.

The changing notion of beauty has helped these women make their mark. From the obsession with fair skins and light eyes, there has been an understand­ing that cookie-cutter good looks are not enough. There has to be something extra. As Prabhu says: “When I came into the industry, I was uncomfortable. There were these fair, north Indian heroines. And I am wheatish, a proper south Indian. I wanted to fit in so badly.” Even Nayanthara, who has been work­ing since 2003 and has acted with many male stars of note, from Rajinikanth to Chiranjeevi, says in the Netflix series, Nayanthara: Beyond the Fairy Tale, “I’m just a girl who wants to give her 100 per cent in whatever she does.”

These women are now creating opportunities, which fit them, rather than fit into any available mould. Says Tamannaah: “My father gave me a filmi name and then I added a few letters to make it fully filmi. But really as a human being I aim to reach my full potential. And then I hope to be every­where I am not.”

Ambition and beauty, intelligence and talent. The rise of the southern superwomen is irresistible.