With two Bollywood films on male hair loss, is this a watershed moment? 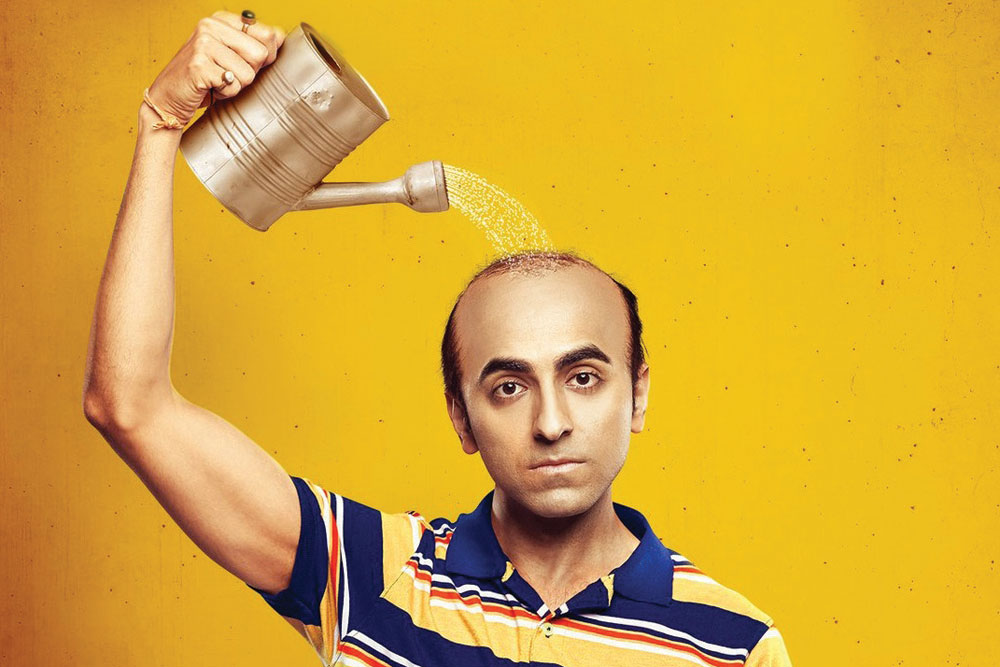 
EVERY NIGHT, A vast number of men across the globe wake up to the evidence of their greatest fear strewn on the pillowcase. Our eyes are arrested, holding the photographs of youth, not by the absent paunch or the adolescent pallor, but on the mop of hair, even one embarrassingly styled. The drain covers in our baths, the teeth in our combs, the early morning faces in the mirrors almost always seem to present the same ‘D minus’ report card. Yes, you are balding. It is the great unspoken male fear. We may rarely share our anxieties. But in secret we fight pitched battles armed with comb overs, toupees, hair plugs, hats, dodgy pills and lotions.

Sure, women lose their hair too. But the genetic coding of men has delivered a crueller hand. Testosterone may give us our edge, but it robs our heads. Women do suffer bad hair days. Phoebe Waller-Bridge’s character in the TV show Fleabag, addressing a barber who has given her sister a poor cut, holds out eloquently, “Hair is everything. We wish it wasn’t, so we could actually think about something else occasionally, but it is. It’s the difference between a good day and a bad day.” But there are no such differences in the days of bald men. Each day is unchanging, each uniformly bad.

Why do we grieve so much over bald heads? It presents the inescapable truth that we are ageing and will one day die. But much of it has to do with the way it is culturally perceived. No bald character can escape a Bollywood film without a jibe or a punch. Our heroes cannot age. So our superstars, as rumours go, secretly wear hairpieces or undergo hair treatment. Rajnikanth is an outlier here. But even he must swallow his pride in his films, wear a hairpiece and keep up the cinematic pretension.

Last week, however, Bollywood saw its first ever film on male baldness (Ujda Chaman). This week, another film (Bala) is already here. If the collective of balding men was a more politically assertive group, perhaps it could have raised the red flag and demanded a balding man play the balding hero? But that would be asking for too much.

So is this the watershed moment towards acceptance of hair loss? If one goes by early reviews, where balding seems to be treated for easy laughs, probably not. Popular culture is almost always universally unkind. Famous villains are bald. Lex Luthor is bald; Colonel Kurtz is bald; Dr Evil is of course bald. Want to show the transformation of Walter White into Heisenberg (Breaking Bad)? Easy. Have him shave off his head. Want to make Amrish Puri a stern but eventually forgiving paternal figure (Dilwale Dulhania Le Jayenge)? Give him a mop of hair. Want to make him glower with menace (Indian Jones and The Temple of Doom)? Shave off his head.

There are bald male heroes in Hollywood. But all of them almost always feature in the high-testosterone world of action movies. When Tom Cruise jumps off a building in the Mission Impossible films, we see a beautiful man doing so. (Cruise is a spy, and suaveness, that spy prerequisite, never seems to agree with baldness.) When Bruce Willis jumps off a building, we really just see a reckless man. He has already lost all his hair. He might as well.

Literature is gentler. Vladimir Nabokov’s best-known work might be Lolita (featuring his most evil character Humbert Humbert, possibly with a luxurious head of hair). But his most beloved character is the bald Professor Timofey Pnin (in Pnin), the bumbling Russian émigré suffering his way through America, falling in love with the wrong woman, getting on the wrong train, and losing his job. But despite these travails, he is treated with a gentle affectionate hand.

Could there be a time when baldness is cured? It appears so. A 2011 Esquire article points to a promising stem cells study. The study’s lead author said, “I think it’s very likely that by the end of your lifetime, there will be a pill or a cream, kind of like there is for Viagra, which your insurance [might not] cover and you might have to apply repeatedly—but yeah, it’ll keep your hair growing.”
Meanwhile, it’s best perhaps to consider the unexamined gifts of hair loss. Competing with other men for women’s affection, the proudly bald TV show creator Larry David suggested in an article that bald men dress better, earn more and become more charming. ‘Have a conversation with a bald man sometime,’ he writes. ‘Go ahead. Do yourself a favor. Tell me you don’t walk away impressed.’