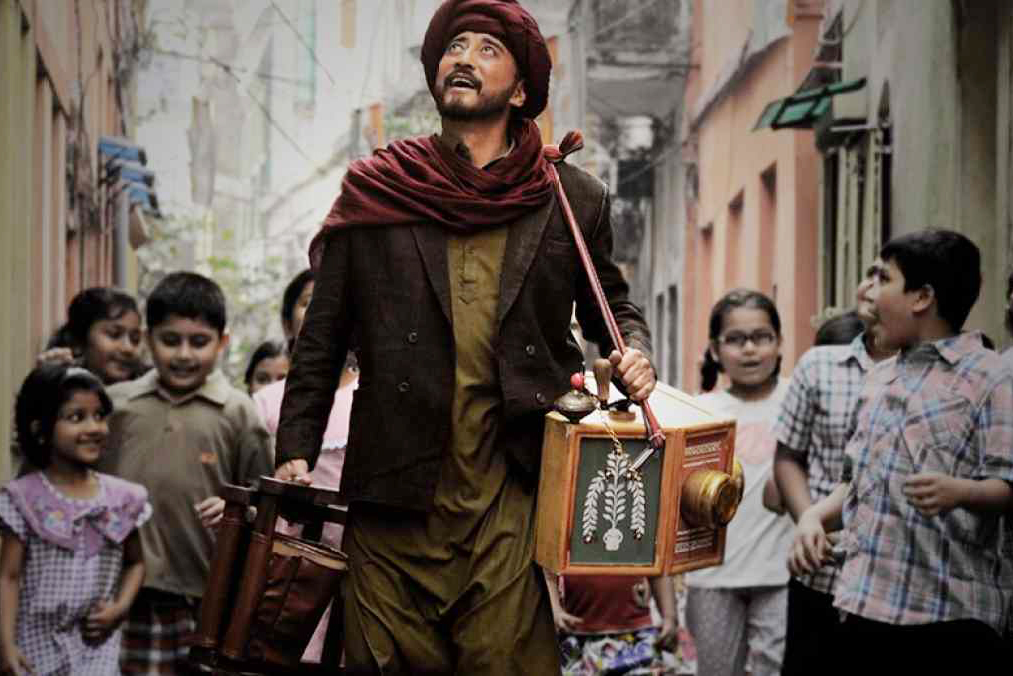 This movie is a contemporary take on Rabindranath Tagore’s story of 1892, ‘Kabuliwala’. That tale was about a dry fruit seller from Kabul who travels to Kolkata each year to sell his ware. He has a family back in Afghanistan, and when he comes across a five year old daughter of a ‘Bhadralog’ aristocratic Bengali family, somewhat like Tagore’s own, she reminds him of his daughter back home. Nostalgic about a country and family he has left months ago, he befriends little Mini. Years later, when he happens to turn up on her wedding day, she is a little embarrassed at the memory of this association with the ‘Kabuliwala’. It is a touching story about fathers and daughters, about fading memories and changing perspectives, about the sense of loss of family and home that is caused by migration.

At a creative low, and at a complete loss for modern stories and subjects, the makers of ‘Bioscopewala’ update this classic work and turn the ‘Kabuliwala’ into a pioneer of the travelling cinema. Forever searching for the politically relevant, the film’s writers turn Rehmet Khan (Danny Denzongpa), into a ‘Bioscopewala’ who is hounded out of his nation after the take-over by the Taliban in the 1990s. His profession – the public screening of films – is described by the presiding clerics as ‘haram’, and he is forced to flee across the border, along with thousands of refugees.

In the present time of the film, we flashback to the little girl whom Rehmet Khan once befriended with screenings from his ‘bioscope’, and with a myriad stories, colourful and endless. She is now all grown up and caught up in her profession. She is a documentary film maker called Minnie Basu (Geetanjali Thapa). One day, shortly after the loss of her father in a plane crash, Minnie discovers that Rehmet Khan, now old and defeated by the trials of his refugee existence, has entered her life once again.

The film is beautifully shot, but fails to move you. One problem could be the back and forth movement in time that the script designs, and the consequent disorientation for the audience. But the primary cause for the emotional disconnect in the movie seems to be the total shift of emphasis from the ‘Bioscopewala’ to Minnie Basu, the film maker.

Whose story is it after all? In the Tagore tale, it is Mini’s father, a writer, who tells it from the perspective of an author who imagines the scenario and the relationships, and gives the story its central theme of nostalgia and loss. The most important character there is the ‘Kabuliwala’. But in this movie, It is Minnie’s story, not his; and not even the story of the formal narrator of this film, Minnie’s late father (Adil Hussain). In other words, a young documentary film maker, who does not appear to have much depth of thought or character, stitches the narrative together from her own perspective; a point of view, to be honest, which is not very interesting.

Geetanjali Thapa seems miscast as the central character. Hers is too self conscious a performance. She is earnest and pro-active, without being curious and sensitive. She presents herself, somewhat dramatically, as a woman, a story teller and a film maker; now involved in a journey of self discovery. Rehmet Khan’s persona, on the other hand, does not come through at all. His story ends up as a matter of fact narration of an Afghan documentation of repression and suffering. At no point are we allowed to look into his soul.

What we are left with, in the end, is a good looking movie without emotional resonance.