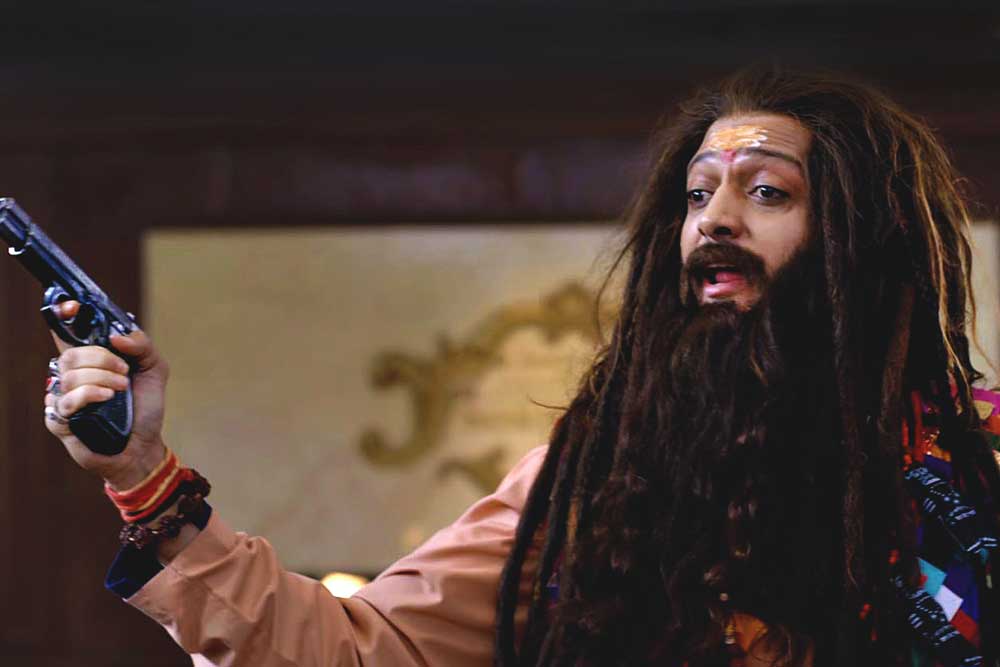 With the essential idea clearly borrowed from Spike Lee’s ‘Inside Man’, ‘Bank Chor’ is a competently made film, but nowhere near as well directed as the 2006 Hollywood movie. Unusual for Lee, ‘Inside Man’ was a fairly mainstream crime thriller, but had two African American actors as the Police detectives investigating a bank hold up, Denzel Washington and Chiwetel Ejiofor, and had a vague sub-text about class and race. The plot held you, and the final unravelling took you completely by surprise.

So to dissect ‘Bank Chor’ as a comedy that is not funny, is an incorrect approach. It is actually a film about a bank heist that has a political twist, and is also about a curious bond that develops between the bank robber and the lead investigator. As is now usual for actor Riteish Deshmukh, he takes the part of a middle class Maharashtrian who plays the ‘Marathi Manoos’ card to garner sympathy. He is a devout believer called Champak, with an unshakeable faith in ‘Ganpatti Bappa’, so much so that he refuses to steal money from the bank locker because there is a cute little ‘Ganpatti’ idol placed there.

Champak offers various sob stories to his fellow Mumbaikars, all strikingly cooperative customers of BOI, Bank of Indians, explaining why he turned into a bank robber. While he holds them hostage, he tells them stories which change dramatically at every telling. His two assistant robbers, Genda and Gulab (Vikram Thapa and Bhuvan Arora), are uncomprehending ‘Delhiwallahs’ who champion the singular virtues of the Capital City area, and will not accept any comparative criticism of the gentlemanly denizens of their proud metropolis.

Into this cesspool of regional conflict enters a dashing CBI officer called Amjad Khan (Vivek Oberoi), a man who is convinced that the scenario at the bank does not resemble any robbery he has encountered so far. He believes that the whole thing is an elaborate ruse to hide a more sinister conspiracy.

Vivek Oberoi looks fit and well toned and plays the tough officer who exploits the internal squabble between the Mumbai Police and the CBI over jurisdiction on the case. It is really a pity that we don’t see this excellent actor more often in films. He has flair, timing and charm, and looks very convincing as the tough talking Officer who intuitively understands that Champak has the key to the mystery of ‘Bank Chor’.

Unfortunately, there is a preconceived and stereotypical imagery of Riteish Deshmukh and Vivek Oberoi floating around, originating from their essay of that vulgar series of supposed comedy for out-of-work actors, ‘Grand Masti’. The collective memory of that garbage insidiously and powerfully works against the idea of taking this duo seriously in any film they collaborate on. Which includes a crime thriller like ‘Bank Chor’.