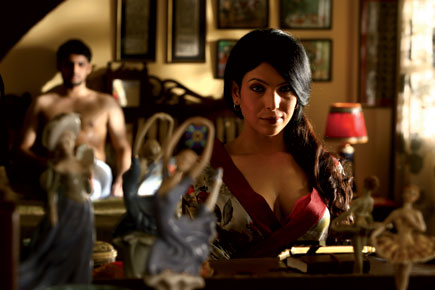 
Based on a vivid story by Mohan Sikka, The Railway Aunty, this film is an exact adaptation. Perhaps it shouldn’t have been, but that is the creative decision of director Ajay Bahl and he has executed it with some skill. About an orphaned boy living with relatives in Delhi, doing ‘BA Pass’, a degree for all seasons, who is sent to do chores for an ‘aunty’ who seduces him, B.A. Pass has pretty explicit sex.

The other star in the film is the city of Delhi. After training him in the erotic arts, Sarika aunty pimps Mukesh (Shadab Kamal) out to other ‘aunties’ across the metropolis. As Mukesh tells it in the story, “from Gol Market to Bengali Market and as far south as Sundar Nagar. Some aunties only wanted to meet in a seedy tourist lodge in Tooti Chowk, after shopping in Connaught Place”. Frankly, this comes across as more ‘Delhi passe’ than ‘Delhi noir’, but what has happened in the last few years is that in cinema writing, Delhi is the new storyteller.

The nouveau riche flamboyance of the city makes for terrific visuals, and B.A. Pass, with its sharp contrasts of chess games played in lonely tree-lined graveyards, afternoon sex in posh bungalows and raucous neon-lit nights in cheap bars, works well.

The drawback of the film is that it sticks too close to The Railway Aunty, which, after all, is a short story, not a novel. So despite a fairly compact 95 minutes, the movie has a sense of incompleteness, with the inner life of the most interesting character ignored. Till the end, we don’t know what makes Sarika aunty tick.