Ayushmann Khurrana once again embodies what it means to be ordinary 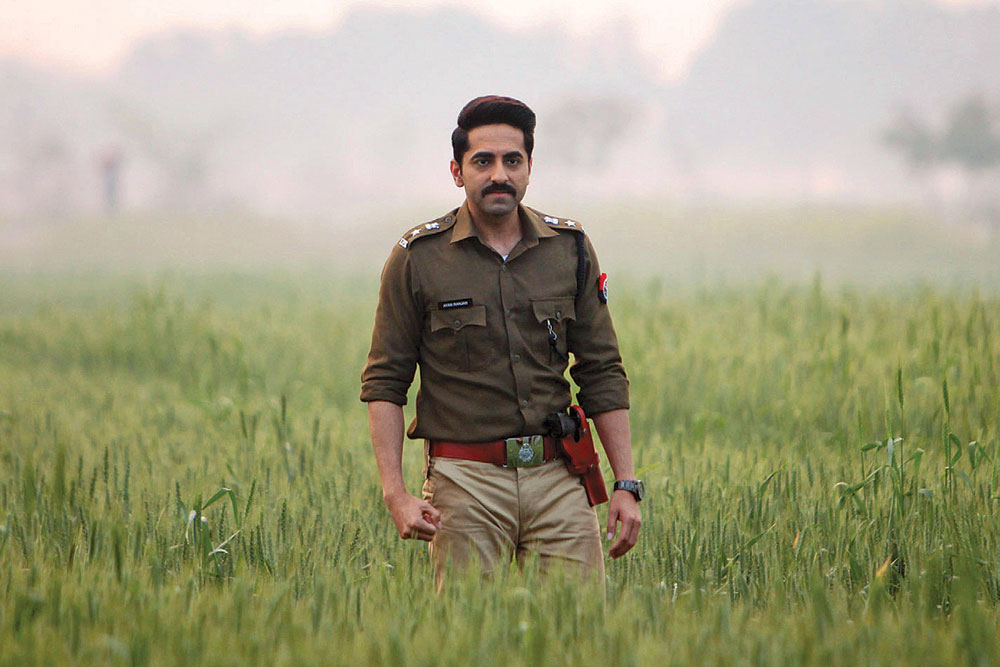 ‘So Mahantji and I are from the same caste?’

In Ayushmann Khurrana’s new film, Article 15, he once again plays a young man up against the multiple identities India offers. They can own up to their faith, caste, language, community, gender or humanity. In Anubhav Sinha’s searing film, based on the gang rape of Dalit girls in Badaun in 2014, Khurrana is a police officer who is confronted by the harsh realities of rural India, where a girl can be raped so that her caste is shown its ‘aukaat’, its place in the power hierarchy.

Khurrana, 33, has become a past master at negotiating the complexities of what it means to be an ordinary man in the extraordinarily complex India of today, with its deep social divisions, increasingly independent women, harsh economic realities and traditional systems of managing conflict. With an ease borne of five years of travelling across the country’s college festivals with his two theatre groups, meeting a variety of people and working in radio and TV as a presenter, Khurrana finds himself uniquely placed to embody the fluid masculinity demanded of the once invincible Hindi film hero. The Alpha Male, move over: meet the Alphabet Male, reconstructing himself bit by bit, letter by letter. As his character says in Article 15, seemingly addressing his evolving audience: ‘You want a hero?’ ‘No,’ says his girlfriend, ‘just people who don’t wait for a hero.’

Nowhere did he portray this new flawed, vulnerable not-a-hero better than in his fourth film, Dum Laga Ke Haisha (2015), which saved his career from a freefall after a successful debut in 2012 with Vicky Donor. ‘Krantikari banenge. Makkhi to maari na sake hai inse (They want to be revolutionaries, but they can’t even kill a fly),’ says the father of the character played by Khurrana in Dum Laga Ke Haisha. The father is talking of an organisation suspiciously like the Rashtriya Swayamsevak Sangh (RSS) which instructs young men on how to be a man and whom to follow as role models—Bhagat Singh, Subhas Chandra Bose, Shivaji and Atal Bihari Vajpayee. It’s a confused list. It has a communist, a lapsed Congressman, a Maratha warlord and a poet-Prime Minister under whom India triggered its second series of nuclear tests.

It’s the kind of masculinity Indian men grow up with, in the shadow of their fathers’ expectations, usually coddled by overprotective mothers and taught by society to feel entitled. Listen again to Khurrana’s father Chandrabhan Tiwari played by Sanjay Mishra speaking of his son: ‘Dasvin to nikaal nahin paaya, Juhi Chawla ke sapne dekh raha’ (He couldn’t clear Class X but he’s dreaming of Juhi Chawla).’ The film is set in the 90’s, the woman (played by Bhumi Pednekar) is better educated than he is and yet he believes he can do better than her.

Caught between the Toxic Man exemplified best by Salman Khan in his portrayals of men who are tone-deaf to the emerging new woman, and most recently reprised by Shahid Kapoor in Kabir Singh, and the Nationalistic Man whose heart beats only for India, Khurrana has negotiated space for male actors such as Rajkummar Rao and Vikrant Massey to try out new personas. So whether he is a young man embarrassed by his inability to perform in bed in Shubh Mangal Saavdhan (2017), a writer unsure of winning the woman of his dreams in Bareilly Ki Barfi (2017) or an adman facing the prospect of his parents having a baby in Badhaai Ho (2018), Khurrana symbolises the man in the middle, as he finds himself torn between a typical patriarchal upbringing and a rapidly transforming society.


“We all may know him as an actor first but for me it seems that’s just the last and obvious culmination of all the talents he is born with,” says Juhi Chaturvedi, writer

For Juhi Chaturvedi, who has written Vicky Donor and Gulabo Sitabo (to be released later this year where Khurrana is cast opposite Amitabh Bachchan), Khurrana is the messiah for all small- town stories, a real face who convincingly transforms into the part. “We all may know him as an actor first,” she says, “but for me it seems that’s just the last and an obvious culmination of all the talents he is born with. His expression, be it in his voice, in what he sings or what he chooses to say in his poetry, all that must have been inside him even during his days in Chandigarh, where he grew up. When your pitcher is full of observations from life, experiences that have pushed you to introspect, it is bound to happen that your craft will be honest.”

Khurrana has often said success is when preparation meets opportunity. The child of a homemaker mother and an astrologer father, Khurrana says he always wanted to be an actor, even though there were many stops along the way: winning Roadies in 2002, being radio host for two years, becoming an MTV veejay, hosting reality shows such as India’s Got Talent, Just Dance, Music ka Maha Muqabla and finally IPL Season 3. All along he was biding his time, being offered roles of the heroine’s best friend or the hero’s brother. He wasn’t desperate but he was determined to be an actor and when Vicky Donor happened, director Shoojit Sircar didn’t even screen test him.

His directors, past and present, adore him. Rohan Sippy, who cast him true to type as a theatre director in Nautanki Saala! (2013), says from the beginning Khurrana found an opportunity to redefine masculinity in Hindi cinema.

“Armed with perhaps the best script sense and instinct since Aamir Khan, he has managed to flourish and engage with his audience and expand it with each film too,” he says. Khurrana says he reads scripts like a member of the audience, which comes from his background as an outsider, as someone who had to queue up to buy tickets, sometimes even acquiring them in black. His desire to be a hero was sparked after watching Tezaab (1988) at the age of four, and the hunger continues to manifest itself in Khurrana avidly seeking directors who would not normally have cast him, given his Mr Nice Guy image.

Sriram Raghavan was one such, and he wasn’t sure Khurrana could be his blind piano player in Andhadhun (2018). “But I was happy to even screen-test for him,” says Khurrana. The result: one of Khurrana’s edgiest performances opposite the consummate talent of Tabu. Raghavan says Khurrana was the last to be cast. “He had heard about the script and texted me he wanted to meet and audition. I narrated the story and loved his reactions and feedback. We shot a couple of scenes with him and an hour later we were discussing dates.” Raghavan notes that Khurrana chooses films that are “content-driven”— he doesn’t think of himself as the star or hero.

IT’S SOMETHING Anubhav Sinha noticed in his Mulk star Taapsee Pannu, which he says she shares with Khurrana. Sinha says he has closely observed a lot of successful people from various walks of life and has had the privilege of knowing them quite closely. “There is one common trait amongst them: humility. They are not working for success in the popular interpretation of the term. They work towards achievements, one after the other. So success is a journey for them, not a destination. That is what keeps them humble.”

The Alpha Male, move over: meet the Alphabet Male, Ayushmann Khurrana, who is reconstructing himself bit by bit, letter by letter

Khurrana likes to talk of it as the ability to surprise the audience. “I remember Aditya Chopra told me this: ‘You must continue to surprise the audience. They must never take you for granted.’” So it is that Khuranna spends a lot of time choosing the perfect script, helped by his manager Sunita D’Souza, and wife, writer and director Tahira Kashyap. Their love story is the stuff of fairytales: they met at their physics tuition when he was 16, and she, 17. They’ve been together since, through ups and downs, and most recently through her breast cancer. They have two children together and Khurrana talks about them even less than he talks about himself.

He nurtures his craft, writes Hindi poetry and Punjabi songs. Chaturvedi says; “Sur hai, bhaasha hai, bhaav hain, Sector 17 Chandigarh ki shaitani hai (He has the right melody, voice, emotions and the naughtiness of Chandigarh). How can he not be what he is?” Other actors work on their bodies, learn riding, swimming, sword-fighting. Khurrana has just been honing his Hindi (a gift from his Hindi literature-loving mother), his acting, his music. Yet it’s not just his art that he brings to the role.

Filmmaker RS Prasanna says it is vulnerability that makes him stand out. “If Mudit was not as earnest and endearing as the story demanded, the house of cards that was Shubh Mangal Saavdhan would have fallen flat. I guess with Ayush as a weapon and a good script in hand a director could convince you to root for even a serial killer.”

Khurrana also wears his contradictions lightly. He is an outsider who doesn’t hang out with the ‘in’ crowd but doesn’t diss them either. He poses for a selfie with Prime Minister Narendra Modi like half of Bollywood, but doesn’t shy away from addressing the fault lines that have opened up in India while promoting Article 15. He is happy to play up his ‘cute’ image but doesn’t hide the fact that he is married and has children.

In fact, if there is one imperfection in this almost perfect everyman, it is this: he is a master of Zen. It’s something that has baffled people as far back as 2002 when he auditioned for Roadies and the anchor refused to believe the bespectacled, skinny kid in front of him was as nice as he seemed: “Aapka put-on charm. Aapka smile, aapka baat karne ka tareeka, it’s not you (Your charm, your smile, your way of talking, it’s all a pretence).” When Khurrana insists he is this in real life, the anchor shook his head and said, “Bhagwan bachaaye (God save you)!”

Looking at his future films, it seems like he’s clearly identified the most compelling tales: he will be playing a cross-dresser in Dream Girl; a man suffering from baldness in Bala; a partner in a gay couple in Shubh Mangal Zyada Saavdhan; and Amitabh Bachchan’s tenant in Shoojit Sircar’s Gulabo Sitabo.