Asterix and the Vikings

A modern look at the heroes of Gaul, this film almost brings Obelix out of the closet 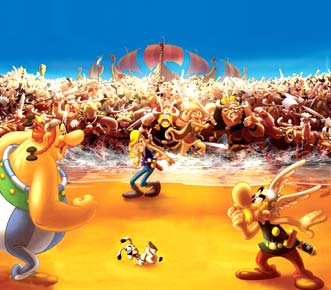 A modern look at the heroes of Gaul, this film almost brings Obelix out of the closet


Is Obelix gay? When Vitalstatistix’s nephew, Justforkix, turns up at the village in Gaul, the standing instructions to Obelix and Asterix are to make a man out of him. But Justforkix belongs to the ‘my, me mine’ generation and is into rock music, not collecting rocks like his rustic cousins.

Justforkix resents being sent to the village by his warrior father, Doublehelix. He is not interested in Gaulic warfare. He’s a vegan and nauseated by Obelix and his addiction to wild boar. He would love to lie around all day and message his friends through his courier bird, Sms. He wants to make love, not war. He sings and he dances. It stands to reason that Obelix should be disdainful of such elitist pursuits.

No such thing. Obelix is besotted by Justforkix. He and Asterix go to the ends of the earth, Viking territory, to rescue the young man when he is kidnapped by the fearsome tribe. The Vikings want Justforkix because they have this deep-seated desire to learn about ‘fear’, something they know nothing about. But when Obelix rescues the ungrateful fellow, he refuses to be rescued because he has fallen for the Viking chief’s daughter. Obelix is heartbroken!

These are just some of the curious aspects of the Asterix movie. Unfortunately, the original wit of the comic book series seems to have evaporated in animation. The film has all the colour and drama and action, but not a jot of the contemplative look at a lost world in which a ‘magic potion’ could provide an antibiotic to the brutality of war and the ruthlessness of the Roman Empire that conquered Gaul, but could never successfully occupy it. In his attempt to introduce a whole new generation to Asterix, Fjeldmark has modified, remixed and, in the process, lost the comic books’ original fans.