Hindi cinema’s evergreen hero is having a sensational TV season 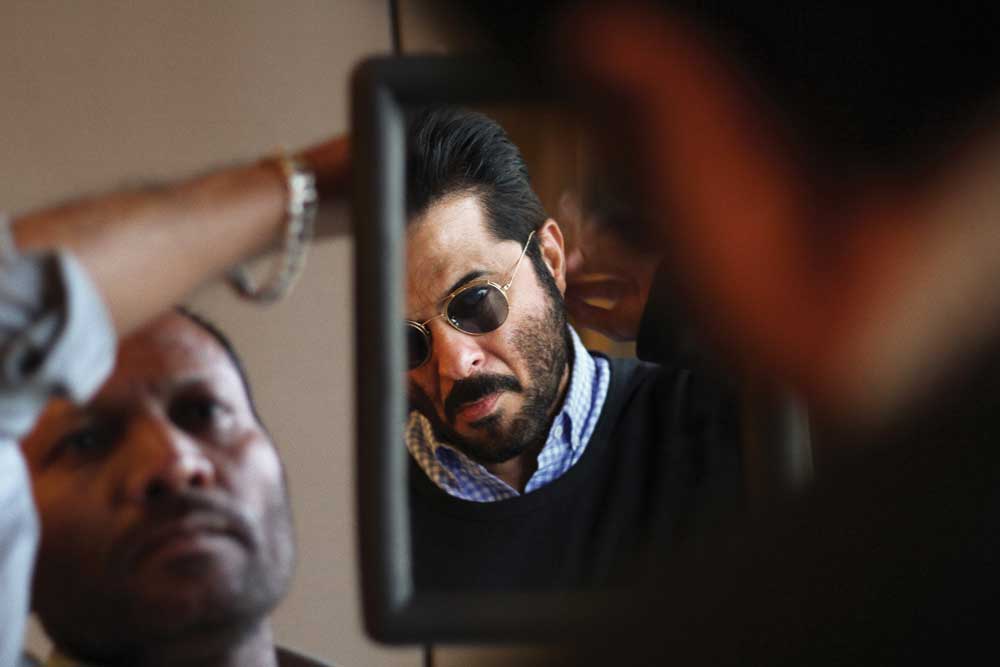 WHEN A BEARDED Anil Kapoor, wearing all black and a sparkling smile, walks towards you, the scene spontaneously demands the beat of deafening dhols. His sole bouncer magically transforms into a group of young men in colourful shirts, chanting the legendary line in full chorus—Dhina Dhin Da. Beat. Dhina Dhin Dha. Beat. At first glance, you feel Lakhan looking up at you, that too in slow motion. It’s priceless nostalgia and anyone who has grown up on masaala Bollywood films between the late 1980s and 1990s would know no other way of describing this actor. Impressions from Kapoor’s most popular characters dance in front of you in no less than a few minutes of being in the same room as him, and that almost never happens.

Today, however, jhakaas Lakhan takes a backseat to Jai Singh Rathod aka the Indian Jack Bauer from the hit television show 24. The second season was aired on Colors recently. “The show makes me feel alive,” Kapoor says, clenching his fist, almost with the excitement of a newcomer. Playing the former chief of an Anti-Terrorist Unit (ATU), nailing the bad guys and saving the prime minister in 24 is what has kept him busy for over three years now. For Kapoor, who is also the producer of the show, adapting a hit American TV show in India was a big gamble that seems to have paid off. 24, the first official international adaptation of a fiction show in India, broke the monotony of over-dramatic reality television and insipid saas-bahu sagas that ruled weekend TV viewing.

The first season of 24 did not meet the standards of the original when it came to screenplay and direction, but it was definitely a step up from what commercial Indian television had to offer. What was even better was that Kapoor also attempted to import the work culture of an Amercian TV series to Mumbai. “TV in India has been stereotyped for so many years that people are literally sleepwalking through it. Our primary television-watching audience has been so used to a particular genre of stories being fed to them that there was no room to experiment. So I thought it was important to work on the scale which the American version worked on to make it impactful enough. Something as simple as being punctual becomes a part of that,” he says.

APPARENTLY, EACH episode of 24 costs nothing less than Rs 10 crore, a big leap from an average Indian TV episode costing anything in a range of Rs 8-10 lakh. “I must confess that producing it was putting a lot of money at stake, but it was a risk I was more than willing to take,” he says. Though season 1 was a bit of a culture shock for regular TV viewers in India, season 2 has opened to a lot more positive reviews. It’s darker, it looks slicker and it comes with a gripping urgency that was missing in season 1. The one thing that has driven Kapoor through his four decade-long career is his instinct. “I don’t think about the box office or TRPs when an idea works for me. I just go for it. I have a certain instinct, which almost always works and that’s what happened with 24,” he adds.

One look at Kapoor and it’s almost impossible to believe that he will be turning 60 at the end of this year. He neither looks nor acts it. “My daughters keep telling me, ‘Dad why are you trying to act young? Be your age.’ But I don’t understand it. It’s about what you feel from within, that’s what shows outside,” he says, beaming with pride. While most of his contemporaries are retired or have settled for ‘fatherly’ roles, he is working 12-hour shifts, attempting to change the face of India’s television culture. Even as young actors struggle to maintain their six-pack abs, all it’s taken him is a healthy daily routine and a fighting attitude to beat his age hollow. “He’s dedicated as hell. That’s what keeps him going,” says his trainer Mark Mead, an Englishman who travels with Kapoor everywhere he goes.

I don’t think about the box office or TRPs when an idea works for me. I just go for it. I have a certain instinct, which almost always works. That’s what happened with 24

It has been quite a leap for the lanky Chembur boy who never dreamt of riding in fancy cars or living in bungalows. He belonged to a family of four siblings, and a film producer father whose struggles didn’t dissuade him. “I saw my father Surinder Kapoor bite the bullet attempting to make films. That’s why I always wanted to be an actor and not a producer. I was like a horse with blinkers on.” Kapoor believes he neither had the looks nor the charisma to pull off a Bollywood film hero in his time. He was the skinny boy, one with too much hair and with arms too thin. “I was everything a hero was not supposed to be. But bashing up 10 villains at a time wasn’t as inspiring for me as playing a mentally- challenged boy.”

While his contemporaries like Sunny Deol and Sanjay Dutt were busy bulking up to look every bit like the hero fans worshipped, Kapoor spent his time at Prithvi Theatre or the Film and Television Institute of India, Pune, trying to hone his acting skills. “I was a misfit then. They used to call me the ‘thelewaala actor’. I loved to watch Ingmar Bergman and Akira Kurosawa’s films. That’s the kind of cinema I exposed myself to because that was where I learnt to play the roles I did in films later.”

Early in his career, Kapoor took up character-driven roles in films like Woh 7 Din (1983) and Mashaal (1984). “I chose to work with directors like Mani Ratnam and Bapu when I started off. I trained myself in Punjabi and Haryanvi for my debut film,Woh 7 Din, went to Chor Bazaar and picked up musical instruments for Prem Pratap Patialewale (he played a street singer, a self-styled musician in the film) myself. I went to the barber and asked him to cut my hair in a certain way. I visited slums I shot films in and spent time there to understand their lives, the way they spoke, the way they thought. It was rare then because actors were looking to become poster-boys. And I wasn’t.”

Films like Tezaab (1988) and Ram Lakhan (1989) earned him fans. Parinda (1989) and Eeshwar (1989) showed how versatile an actor he was. His tapori style became synonymous with the country’s youth. Boys imitated his famous moustache and girls sang his super hit songs. Yet, he often chose to play the underdog; like his role in Saheb (where he played a budding footballer who sells his kidney to get money for his father’s operation). “I made the choice to create my own characters. I would walk on the streets and people would never call me Anil Kapoor, it was always ‘Munna bhai’ or ‘Mr India’. That was my winning moment.” he says.

From playing the love-lorn youngster in Lamhe (1991) and the nationalist in 1942: A Love Story (1994) to a dutiful son in Virasat (1997) and an honest armyman in Pukar (2000), few have Kapoor’s filmgraph. In fact, when Lamhe released, he was criticised for having played a part that was then considered to be way ahead of his time. “Lamhe was a conscious decision so people see me in that space. It was a challenge I put up for myself. Rajinikanth used to tell me, ‘Anil why aren’t you doing things which people love to see you in? You’re so good in comedy and action, the masses love it.’ I said to him that when I go to sleep, I don’t dream of becoming a big star, I dream of doing different roles. A superstar has a shelf life. I’m glad I never became one,” he adds.

Despite these films, Kapoor remained one of most underrated actors in the industry. The advent of the three Khans did not help. Then 30 years and 100 films later, Kapoor signed Slumdog Millionaire (2008) that took him to places he always wanted to go. It was as if the West had acknowledged what the Hindi film industry never could. He was soon rubbing shoulders with Tom Cruise in films like Mission Impossible: Ghost Protocol (2011). “I don’t think it’s wrong to be part of a space that’s creating films at a larger scale than us. What it’s given me is exposure and I bring that back to my country.”

At 59, Kapoor is still reinventing himself constantly. He considers this the best phase of his career, and after all these years, he finally feels like he fits in. He’s bringing shows like Modern Family and Prison Break to India and is confident that we are ready for it. “I’ve always said that I’m running a marathon, I’m not here to stop. And I’m definitely not stopping now.”