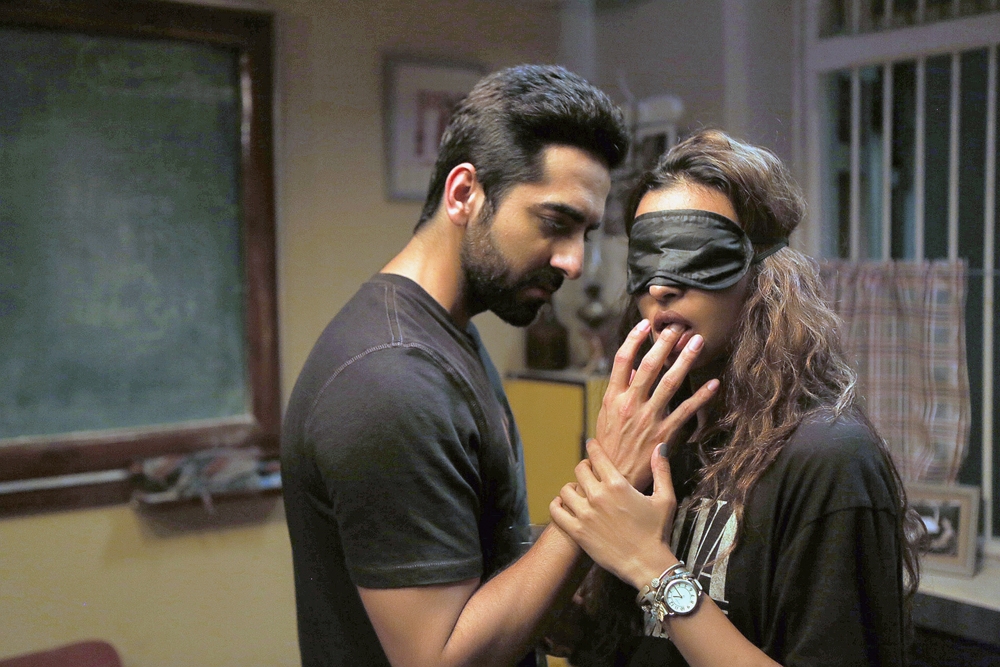 This is a thriller about a blind man who watches the aftermath of a killing. The man and woman responsible for the death, stalk him, worried about how much he has seen. He is a piano player whose other senses, particularly that of sound, have been enhanced, ever since he turned blind.

Akash (Ayushmann Khurrana) was once hit on the head by a cricket ball when he was a boy. The impact, he says, damaged an optic nerve, making him visually disabled. He lives alone in Pune, and travels around the city on foot, and on rickshaws, with helpful drivers giving him assistance. One day, he is crossing a road and gets knocked down by an argumentative Pune driver on her two wheeler. Sophie (Radhika Apte) is appalled at what she has done, helps him up, takes a fancy to him and hires him as a pianist at her Dad’s restaurant.

There he runs into an actor of the 1970s, Anil Dhawan, who had the good fortune to act in some of the movies of the era that had the finest music, particularly in ‘Piya Ka Ghar’, with Kishore Kumar’s divine rendition of ‘Yeh Jeevan Hai’. Akash plays this tune on the piano, amongst a medley of other music. In ‘Andhadhun’, Dhawan is given the fictional name Pramod Sinha, a yesteryear Bombay actor, presently dealing in real estate in Pune. He is now married to a much younger wife called Simi (Tabu).

But other than Anil Dhawan, and him largely for sheer nostalgia, there is not a single character in this film that you get emotionally or psychologically invested in. As long as factual plausibility is sustained in the film, it holds you. But once that circumstantial authenticity is lost post interval, with the addition of characters like a lottery ticket seller, a rickshaw- wallah and a quack doctor who steals kidneys, you flounder.

The two essential ingredients of a thriller, motive and background, are missing. Who is Akash? How is he living alone in the city in a heritage building, and what is the reason for his elaborate hoax? That is, apart from the obvious one of learning how to focus on sound instead of sight, and of being able to pick up pretty women empathetic to his blindness. Who is Simi, and how is she so blasé, committing one murder after another, without a qualm, without batting a pretty eyelash? If indeed she is Lady Macbeth, then what is her motive and where is her guilt?

Director Sriram Raghavan relies entirely on happenstance to construct his thriller. Events unfold like the hunting of a hare. You shoot one, and you miss one. The one you miss, leads to an entirely different chain of events. Human values, attitudes and beliefs that lead to greed and guilt, have no part in it. This film is so different from his earlier thriller – ‘Badlapur’ – a movie that added morality to the mix, and got you thinking about the psychology of a criminal.

The result is a thriller with not a single scary moment. ‘Andhadhun’ is wonderfully mounted, nicely cast and beautifully art directed, but not once do you grip your seat, sit back in horror, or cover your eyes. This is a movie that gives satisfaction by making an audience feel cine-smart. Oohing and aahing at the mise-en-scene is all very well, but how about meeting the first objective of a thriller and terrifying us out of our wits?