In matters of the heart, actress Meena Kumari knew no restraints. When the young, inexperienced actor Dharmendra got his first film alongside her, he didn’t realise just how much it would impact his life 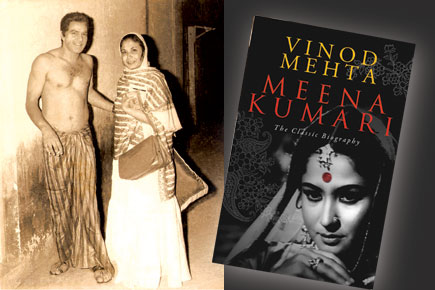 In matters of the heart, actress Meena Kumari knew no restraints.


Around now (in the 1960s) a name called Dharmendra was being bandied about. This man had come from Punjab to make a name for himself with the sort of determination one reads in storybooks. Not deterred by the fact that thousands with ambitions similar to his arrive in Bombay every month, he stuck to his resolve. With worn soles, an empty stomach and no chance of nepotism (Mr Dharmendra had no uncle in the cinema industry), he made a daily round of the studios hoping for a sale. What kept him going was his grit, a stubborn persistence, a faith that finally he would be spotted.

Incidentally, he knew nothing about acting, neither did he look like Cary Grant. What he did have was an earthy, slightly primitive, woodcutter charm. One look at him and you knew he was a product of ‘asli ghee’ (pure ghee). Dharmendra got his breaks—but alas he nearly made a disaster of them. His first film was a total failure and in subsequent efforts he showed no discernible talent. Fortunately, Shola Aur Shabnam, although a box-office failure, was pleasantly noticed and got moderate praise from critics.

And then the best thing that ever happened to Dharmendra happened—he met my heroine, and his entire life from that day onwards took a different direction.

The film they were signed on together was called Purnima, and Dharmendra would go around asking, “What is Meenaji like?” He was petrified at the prospect of facing her in front of the camera. Cast opposite an established star, the novice is surrounded with handicaps. Having got his break he must on the one hand prove himself in his own right, and on the other extract a quantum of respect from the established star. (My heroine was too absorbed an artiste for malice, but some of the others are known openly to interfere in the casting.)

At Purnima, therefore, Dharmendra was unsteady. He approached someone who had worked with my heroine for solace and advice. “It’s no joke,” said this man, “playing opposite Meena Kumari without letting her completely overshadow you. She can outclass you without a line of dialogue, with a mere twitch of her lips, or glance. If I were you, I would simply go and touch her feet before facing the camera.” For a man who was already unsteady, this advice wasn’t much help.

A serious student of Hindi cinema, Dharmendra had his own personal list of favourites. My heroine occupied top place in this list. As a result, this particular novice approached Purnima with the right amount of humility and willingness to learn. “I had always been an ardent fan of Meenaji. I used to see her pictures and worship her. It was my ambition to become an actor, and it was my dream to act opposite Meenaji.” The note of reverence in this statement is of consequence for it played an important part later on.

Face-to-face they came for the first time at Chandivili during outdoor shooting. “Naturally, I was a bit nervous and apprehensive. But when I was introduced to her, she was warm and friendly and welcomed me with kind encouragement. I was thrilled, happy and gratified.” My heroine on her part liked Dharmendra, I am told, at first sight. There is no confirmation whether he touched her feet, but there is confirmation that she said, “This boy will rise. He is not the routine entry.”

Coincidentally, at this particular moment of her life, Meena Kumari required a stable and devoted man: big and strong, someone on whom she could literally rest her head, and someone who was not too famous. One of Mr Dharmendra’s associates who watched this relationship flower is on record, “In the beginning it was primarily work between them. Meenaji would spend all her spare time to enact Dharmendra’s scenes for him. With patience and affection she would explain each and every detail of the shot, put him right when he did something unsuitably, make him practise his part until he was perfect and natural. She helped him correct his weak points, while developing his abilities. She inspired confidence in the uncertain youth. She was the stimulus.”

One, Meena got a certain kick in picking up people struggling in the industry. These strugglers were invariably male and young. “She always liked having a few puppies around her,” was how someone close to my heroine put it. Two, ‘grooming and correcting weak points’ had an ulterior motive. Really it was a ploy. Meena Kumari wished to engage the attention of this young man. She was too dignified and renowned an actress to make an open pass; therefore, by feigning professional interest she was initially able to spend time with Dharmendra without making her real intentions known to him or to others. Nothing wrong, just good gamesmanship…

Dharmendra was almost a daily visitor at Janki Kutir. Together they would open a bottle and spend a few hours. These were the good times.

Now there is an impression that Dharam (as she used to call him) was responsible for encouraging her towards the bottle. They say she drank because of him, because he insisted.

Like all good Punjabis, Dharam then and still enjoys his booze; but it is a lie that he persuaded or pressured Meena to drink… If anything, he was unhappy about her drinking and tried to stop her. He nearly succeeded: while Dharam was around, Meena’s imbibing was restricted, once he left it was rampant. Dharam was everything she wanted then: honest, reliable, large, loving and comforting…

She saw a lot of him at work and after work. In 1964, my heroine was involved in five films and in four of these—Purnima, Chandan Ka Palna, Phool Aur Patthar, Kaajal—he was very much in the scenes.

And with great abandon did she love. Meena, to her eternal credit, was an honourably honest woman when it came to the affairs of the heart; and since she truly loved this Punjabi youth she saw no reason either to be ashamed or to keep it a secret.

At cocktail parties, at premieres, Meena openly showered affection on Dharam. Sometimes she would take his hand and the next day it would be in print. On one occasion, mischievously almost, she recited a love couplet from Ghalib which left no doubt in the audience’s mind about Mr Dharmendra’s position in her heart.