A Blind Date in Berlin 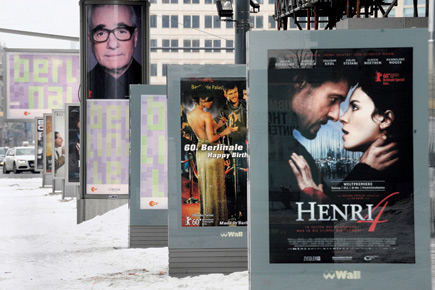 
One of India’s finest novelists on what he endured at the Berlin Film Festival.

Seeing a new movie is like going on a blind date: will it be a damp squib, a magnificent encounter or a total snafu? It’s much worse when you are attending a film festival. You are coming in from the cold, the films are often in an alien language, and the synopses are a dead loss. (Can you imagine anything more banal than the summary of that ghost story, Hamlet?) As for critics, they are just as clueless, as a whole lot of movies are premiering. As the 1970s Virginia Slims ads said, ‘You are on your own now, baby.’ Hit or miss, take your chances. It’s that rarest of things, for better or worse, you will have the final word.

Most, if not all critics, suffer from that condition called ‘Papal infallibility’. I’m no exception. Sometime around the middle of the Berlinale (also known as the Berlin Film Festival), I discovered that other critics had the gall to often utterly disagree with me. What I intend to do is to write very briefly about my own responses to a few films, then add a quote or two in italics from others. And here’s the best part, we’ll guillotine the lot who dare to contradict me.

Here are some of my blind dates.

This is a small but good mainland Chinese film, primarily because of the quiet performance of the female protagonist. A married couple is separated because of the civil war between the Kuomintang and Communists. The pregnant wife is left behind while the husband ends up in Taiwan. Both remarry. Fifty years pass, and the man returns to mainland China with some tourists after his second wife’s death. And out of the blue, he talks about getting together with his former wife and she seems more than willing if her husband gives her permission. This is where one runs into the ‘King Lear hurdle’. The first crucial move strains your credibility, and yet if you accept that initial premise, the rest works out pretty well.

(Breaking news: the film got the best screenplay award. I forgot, juries too are infallible.)

God save artists from their hagiographers. Allen Ginsberg and his poem Howl are the subject here. The film is a hotchpotch that does not add up. It’s an endless recitation of the poem accompanied by juvenile sci-fi visual sequences, the actor playing Ginsberg quoting lengthily from his interviews, bits and pieces of the poet’s personal life, all of it interspersed with the obscenity trial of the publisher of Howl, the last done with a smugness that can only come from hindsight. Skip it.

Polanski in good form. The film would have been topical at any time after the Iraq war when the British Prime Minister, Tony Blair often seemed to behave like an American stooge. But it is significantly more so in the light of the current Chilcot Iraq Inquiry Commission and the ex-PM’s slick performance. Based on the Robert Harris novel, The Ghost Writer has a sly thesis and is a tense, no-nonsense thriller. If you like thrillers, go for it.

(Well, I’ve put my foot in it. The Ghost Writer just picked up the Silver Bear for the best director. What was the award for? Lifetime contribution? A gesture of solidarity with the beleaguered director? Or for direction that’s got nothing beyond competence to recommend it?)

What can one say about this bloated, over-the-top, manipulative, melodramatic thriller bereft of thrills? The Berlinale is perhaps the only film festival which includes non-competition films in the competition section. Yes, there is a sting in the tail, but it’s not worth plodding through 138 minutes of every cliché in the psychological thriller genre. Leonardo DiCaprio, who has done such remarkable work for Scorsese, plays a federal agent investigating a pyromaniac responsible for his wife’s death. Poor Leonardo flounders and sinks in the endless storm that rains and drains out both the movie and the audience. Go for it if you are a sucker for punishment and big names.

(‘Expert, screw-turning narrative film-making…,’ that’s Todd McCarthy in Variety. ‘Scorsese applies his protean skill and unsurpassed knowledge of Hollywood genres to create a dark intense thriller…’ I guess I’m about to be sacked from my job.)

If I Feel Like Whistling, I Whistle; The Robber

Two films about two prisoners, the first is a taut, powerful film, while the second has the potential to be just as strong but doesn’t make good on its promise because it does not delve into the motivation for the appalling acts of violence. The Romanian film, If I Feel Like Whistling… is about a young prisoner who has only 15 days to go before he’s let off and wishes to save his little brother from their mother, a woman of easy morals who abandons her children every time she takes on a lover. He has been an exemplary prisoner, and has tremendous self-control in the face of acute provocation. The Austrian film, The Robber, starts on the day the protagonist who is training to be a marathoner is let off. Both men are taciturn, intense, and have single-track minds which make them prisoners of their own obsessions. The irony is that they fail to understand that the consequence of their actions will destroy the very goals they have set for themselves.

This Turkish film, about a six-year-old boy and his relationship with his father and nature, has some truly lyrical moments and the boy is nothing less than superb and so are his classmates. The film, though, would have been better had it been at least ten minutes shorter. The camera dwells lovingly on nature but the other half of the film is shot in near darkness for inexplicable reasons. One of the special features of this year’s films, including Bal, is long stretches of silence. These are supposed to be loaded with significance. The assumption, as with the Tarkovsky oeuvre, is that since the director leaves so much unsaid, the audience must feel obliged to do all the ‘saying’. (And what if the director is that fabulous creature, the emperor without clothes?) We are, however, only too willing to read the deepest spiritual, metaphorical and symbolic meanings into the silences. Rest assured you will have a field day in Bal.

(Ray Bennet’s review in the Hollywood Reporter’s The Daily Berlin says the cinematography was ‘superlative’ and that ‘… while nature is not full of human kindness, humans may find salvation there.’ Breaking news and shock treatment for yours truly. Bal picked up the Golden Bear for 2010.)

Three disparate strands which, as in Amores Perros, intersect at the end. An unmarried young woman aborts her unborn child and cannot stop bleeding. A police officer shoots another pregnant woman. The woman survives but not the foetus. And lastly, a believer discovers that despite the Quran’s injunction against homosexuality, he is drawn to another man. Shahada is a meditation on faith, especially Islam, in its various aspects: intense belief with a strong undercurrent of compassion, guilt, the retreat into extreme fundamentalism as a way of repentance and salvation, etcetera. There are times when Shahada seems more insightful than all the tomes written about Islam and fundamentalism.

(A couple of days later I sat next to a lady critic who told me she walked out of the film after 20 minutes. Another said Shahada was okay as a TV film but too oversimplified to be a major film. Should I recant what I wrote, I asked myself. Is it time I stopped reviewing films altogether?)

Here’s the moral of the story. Thank God for differences of opinion. As we have learnt from various dictatorships, the former Soviet Bloc or the Chinese, regimentation is the end of art. Never mind the cliché, let a thousand, nay, let a zillion flowers bloom. There’s enough room for diverse works of art and critics on the planet.

Kiran Nagarkar is a novelist in English and Marathi, playwright and screenplay writer.