Despite the big names, it’s a devious Russian, some skyscrapers and a few aircraft carriers that hold this film 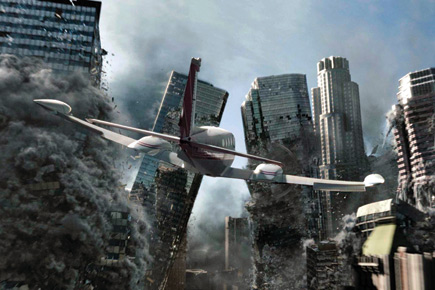 Despite the big names, it’s a devious Russian, some skyscrapers and a few aircraft carriers that hold this film


The most interesting character in 2012 is a large Russian billionaire called Yuri Karpov (played by Slatko Buric). The most impressive piece of equipment is also a big Russian—a six-engine Antonov 500 aircraft that’s not even on the drawing board (Antonov 225 is the biggest yet).

Karpov takes a good American chap (John Cusack) and his dysfunctional family on board to escape apocalypse now and such is his lifestyle and the aircraft’s luggage space that his entire fleet of luxury cars fits in the hold.

Armageddon this time round for Roland Emmerich is solar activity so dramatic that earth’s crust fractures and earthquakes and tsunamis devastate the world. Most of the planet’s land mass slips under the sea. The only chance for survival is in China where a few post modern ‘Noah’s Arks’ have been built. Passes are by invitation or by a few billion euros in donation.

It is interesting to observe that in this and in previous films, most of Emmerich’s special effects are designed to trigger the primordial fear of a destabilisation of our vestibular system. The film sabotages this balance by showing gigantic objects—skyscrapers, aircraft carriers, mountains—falling down or sinking.

So while watching 2012 in the theatre, you are mesmerised. Only when you leave the movie hall can you dismiss the film as 158 minutes of the gimmickry that it is. But hang on, there is more in store. 2012 also works as an assault on our idea of culture and nationality. With an earthquake, the natural cracks on Michelangelo’s painting on the Sistine Chapel gradually widen until the whole edifice collapses. A gasp from the audience! A scientist from India predicts the disasters to come but the promised pass for him on ‘Noah’s Ark’ never arrives. This is prejudice!

As for the prospect of the extinction of the human race in 2012, a lovely verse by Ogden Nash sums up the movie: Amid the mastodontic wassail/ I caught the eye of one small fossil/Cheer up, sad world, he said and winked—it’s kind of fun to be extinct.