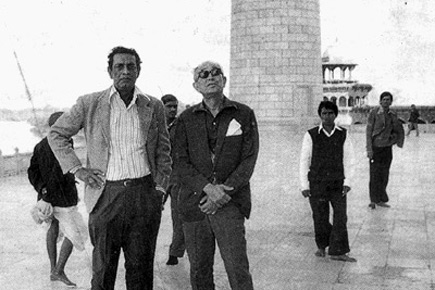 
On our way to Nara, a brief diversion had taken us through the woods where Rashomon was filmed. These were up in the mountains, and one could just as well have been on the Kalimpong Road. As I sat in the train, I thought of the woods, of the strange and powerful film shot there, and of my imminent encounter with the maker of that film: at the end of my journey lay a lunch appointment with Akira Kurosawa…

…As it turned out, the venue for the meeting was a Chinese restaurant in a quiet back street of Tokyo. ‘A favourite of Kurosawa’s,’ said Mrs Kawakita, my hostess and a close friend of the director…

Kurosawa turned out to be that rarity–a tall Japanese. He also had a stoop, with an appropriate humility to go with it, kindly eyes which a ready smile thinned into more slits, and a hushed and gentle tone of voice—all of which was in unexpected contrast to the ferocious image derived from his samurai films. But then, it is not unusual to find schizophrenics among people of the theatrical profession, and I knew Kurosawa had Samurai blood in him. I had visions of his unbridled other self, pitching into that scene of combat with all the controlled fury of a samurai himself.

I started by talking of Seven Samurai, which turned out to be both his and my favourite amongst his films. ‘It needs long and hard training to be a film samurai,’ he said. ‘There was so much about the samurai that was stylised—his ride , his run, the way he wielded the sword. A samurai would never be hunched over his saddle when charging. He would stand straight up with feet firmly on the stirrups…’

Kurosawa rose from his chair to demonstrate the stance of the charging samurai. ‘And about the sword—it wouldn’t cut at all if you only hacked with it. You would have to combine (more demonstration here) ‘a backing motion with a slicing motion. And when the samurai runs, his head shouldn’t bob up and down with his footsteps…’

I asked if he had any more samurai films in mind.

‘None’, he said. ‘And I doubt if I could ever make another one.’

‘Because there’s such a dearth of horses now. You see, most of the horses used in films came from farms. But now farm work has been mechanised, and horses are bred only for racing.’

From Our Films, Their Films by Satyajit Ray, Orient Longman