What Is a Modern Masterpiece? 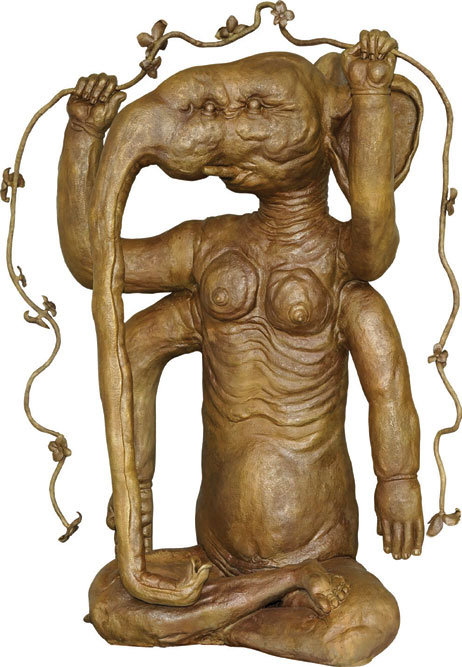 
AN ARCHITECTURAL MARVEL OF THE INDO-SARACENIC Revival style, the Taj Mahal Palace in Mumbai is a byword for old-world glamour. “It’s the most iconic address,” affirms Ashish Anand, the CEO and managing director of DAG, justify­ing his decision to launch two new galleries in its premises. Nestled amidst an alley of luxury stores, the two flagship spaces were opened to visitors on March 20 with a sumptuous inaugural exhibition. On view until May 30, Iconic: Masterpieces of Indian Modern Art brings together 50 prominent works of art, from the 19th century Company Paintings and the Bengal School to something as recent as a rare Jogen Chowdhury sculpture Elephant Man created during 2020-21’s pandemic-induced lockdown—and everything else in between. To accompany the exhibition, DAG (formerly known as Delhi Art Gallery) has also unveiled a 753-page scholarly tome that traces the history of 200 years of Indian art from the colonial to the modern. Published in two volumes, it shatters the well-worn impression of commercial galleries as mercenary machines, focussed only on the buying and selling of blue-chip art. “Re­search, documentation and publishing has been an important aspect of what we do at the DAG. With both this book and exhibition we are establishing further benchmarks in terms of defining what a ‘masterpiece’ is. That word is so misused that we were seeking a significant departure from it and that’s really where our journey began,” the gallery’s curatorial director Kishore Singh explains.


During a walkthrough with Singh, he suggests that it’s important that we begin right at the beginning. Starting with a Company scroll, which dating from 1805-10, turns out to be a revelatory experience involving an under-recognised part of our art history—the Indo-European creative confluence. Made on cloth with watercolour and gold highlights, it is “one of the largest Company paintings ever documented,” Singh insists. This treasure by an unknown artist depicts a pano­ramic view of the Agra Fort, with Persian inscriptions on the top. Company Paintings pertain to the colonial period, when the Mughal Empire was sliding into decline while the ruling East India Company was rapidly replacing the royal courts as the new patrons of the land. “With major centres like Delhi, Murshidabad and Calcutta losing their power, these painters who were erstwhile miniature artists were now being hired by the colonisers. Company Paintings are not narrative and that’s where they differ from the miniature style. The Europeans brought their own vision into it. They didn’t want the usual mythological stuff epitomised by the miniatures. Instead, they were moving into subjects of understanding how India looked like, its flora and fauna and architecture, virtually having their artists document everything with an occidental eye,” says Singh. What makes the Company movement so enthralling is that “it blends two cultures and for the first time creates a new form of art. But once again because this art was never meant for consumption in India, we don’t know much about it.”

There’s much about Indian art that is less known. Take artists like Edwin Lord Weeks, Frank Brooks and Marius Bauer who interpreted India in their own way, but their work was rarely shown in the country which inspired it. The Dutch artist Marius Bauer’s Festival on the Ganges is an intriguing portrait of Banaras from 1912. Bauer eschews the spirituality associated with the Hindu holy city to zoom in on a busy riverfront where the forces of trade and commerce assume divine powers while gods and hermits take a backseat. Singh says, “The beauty of Bauer’s work is that you don’t see your typical Banaras here, with its bathing ghats, pilgrims, temples and the spires.” The painting shows a rowboat with two horse heads. Created to commemorate an earlier visit by Edward VII. The son of an artist, Frank Brooks was a renowned royal portraitist of his era. Hailing from Salisbury, many of his works can be found in public collections in the UK. His majestic 19th century profile of Karansinhji II Vajirajji artfully captures the young Thakur of Lakhtar (Gujarat) in all his regalia, earning comparisons with his own previous copy of Queen Victoria (which itself was a revamp) that is reportedly still hanging at Salisbury Guildhall.

Described as orientalists, the European artists travelled to exotic locations across India and made it both their home and muse. Singh says, “Originally from America, the Netherlands, Poland and England, these foreigners painted Indian street scenes, architecture, our people and the lifestyle and the way we lived and worked. Their work offers amazing insights into what happens when local needs are paired with European eyes.” Though not as well-known in India these artists are by no means neglected names. As Ashish Anand says, “They were absolute masters of their time but given India’s weak art infrastructure and documentation over previous decades, they became invisible over time. DAG’s role in resurrecting them is to give them their due place in the Indian art marquee.”

Which isn’t to say that there are no expected attractions on display. The works of MF Husain, FN Souza and Tyeb Mehta have been meticulously selected to fit into their personal mythology alongside their place in history. Husain’s Udaipur (1962) is a heavy impasto landscape, a stark diversion from his famous cubist figures and mythic horses. It was painted in the same decade when he filmed his well-acclaimed documenta­ry Through the Eyes of a Painter in Rajasthan. “In this particular painting,” Singh observes, “you see stones, walls, windows, arches, citadels and fortifications and the labyrinth of lanes and doors. The browns and yellows remind you of the colours of the desert. There’s a grand sense of celebration of history and culture that he builds into it. Let’s not forget that this was a time of Indo-China war and Husain might also be hinting at the indomitable spirit of our people.” On the other hand, FN Souza’s large-scale nude figure from 1962 has been apparently sourced from a period when he was working for an American collector as a retainer. “Free from commercial pressures, he was painting purely for his pleasure. What’s important to note here is that this is right before Souza becomes confron­tational. The Cubist-style distortions have begun but at this point there’s still a certain degree of respect and love he has for the woman posing for him,” Singh says. We think of the co-founder of the Bombay Progressive Artists’ Group as an heir to Pablo Picasso, something he himself coveted in his lifetime. But in truth, Souza’s nudes owe more to Ajanta murals and Chola bronzes than cubism.

EQUALLY IMPORTANT TO THE SPIRIT OF THE show, though few in number, are the roster of sculp­tures. Widely regarded as India’s first modernist sculp­tor, Ramkinkar Baij’s The Poet from 1938 is Ashish Anand’s personal favourite work. A bust of Rabindranath Tagore, it’s unusual for many reasons, not the least of which is its material. Baij carved it out of cement because traditional material such as stone, wood or brass was not easily available in Santiniketan, West Bengal where both Baij and Tagore were based. “Almost all representations of Tagore reverentially showcase him as a great sage and philosopher. But The Poet is not a straightfor­ward portrait. Baij is playing with the form, splitting the face into two the way Picasso might have imagined it. One eye is concave and the other is convex. Tagore is shown looking down, cutting a lonely figure,” explains Anand. Singh contends that Baij captured Tagore at a difficult moment in his life. “It’s when Gurudev was dealing with the loss of his wife, sister-in-law and his son. At the same time, he was worried about organising funds to keep his university running. There’s a lot of anxiety which is evident in this work,” he says, adding, “Even Baij is challenging himself as he looks deep into his own inner psychology to understand Tagore’s pain.”

“The word masterpiece is so misused that we were seeking a significant departure from it and that’s really where our journey began, says Kishore Singh DAG Head of Exhibitions & Publications

Like Baij, Raja Ravi Varma has long been canonised as India’s first modern artist. How can a show of this magnitude be complete without Varma, asks Singh, rhetorically? The painter from the Travancore royal family is represented by The Coquette— though the work is not attributed to him as the inscription on the mount spells his surname with an ‘e’. Still, Singh sounds ecstatic in discussing this work’s provenance: “It’s one of the finest examples of late nineteenth century art which was likely painted by the master himself even though it does not bear his signature. The only other explanation is that it might have been painted by another artist at his studio — however unlikely that seems given its quality. Two other versions of the painting by Ravi Varma are well documented. Since these were never turned into lithographs or oleographs at his press, it would be impossible for anyone else to ‘copy’ the work, hence the attribution of the painting to his studio.” It depicts a woman seductively looking at the viewer, holding a fruit in one hand while balancing the pallu of her sari with the other. “The Coquette was flown to London for an exhibition immediately after it was made and remained overseas till it was acquired by DAG,” Singh says.

The idea of ‘modern art and how to define it in the Indian context’ arises often when talking to Singh. As we come to the end of the walkthrough, the conversation inevitably turns to these seemingly simple questions. Unfortunately, they evade easy answers. Does Indian modern art originate with Ram­kinkar Baij, Raja Ravi Varma or Amrita Sher-Gil? Can the Bom­bay Progressive Artists’ Group—with Souza, Husain, SH Raza, Ram Kumar etc as its flag-bearers—be deemed as the architects of Indian modern art? What about Gaganendranath Tagore who was exploring cubism even before Husain and Souza? For Anand, Raja Ravi Varma remains a forerunner of Indian modern art. “Absolutely!” he says. “He changed the course of Indian art practice forever.” In his typical measured tone, Singh adds, “Many people do count Raja Ravi Varma as the first modern­ist. But then, there are others who argue that he’s too academic. Definitely, as a kind of resistance to the whole academic thing you have the Bengal School’s Abanindranath Tagore, Asit Haldar, Prosanto Roy and others. Interestingly, the Bengal School itself was looking back at the past, particularly Indian mythology.”

It’s a matter of irony that the Budapest-born Amrita Sher-Gil, who once declared, “Europe belongs to Picasso, Matisse, Braque and many others. India belongs only to me,” reclaimed her own language of modernism from Indian rural life. Singh, who firmly believes that modernism was a result of collective triumph rather than an isolated case of individual achievements, agrees, “Paris returned, Amrita Sher-Gil was very certain about wanting a position for herself as the first Indian modernist. She was familiar with the Bengal School, which she rejected, but was less familiar with experiments in Santiniketan where Rabindranath Tagore was already paint­ing in a style that would be considered modernist anywhere in the world. So, there were these different interpretations of modernism occurring all over the country and everything that disrupted the organic flow of art practice in the subcontinent was a footstep towards modernism. Now, you can take any of these and say this works for me or you can say that these were all a part of a larger whole. Why should we only have one little story for ourselves when we can claim all of it?”

(Iconic: Masterpieces of Indian Modern Art runs at DAG, Mumbai till May 30)