Bengal’s once-famous muslin, which perished under British rule in the late 18th century, is poised for a glorious comeback. 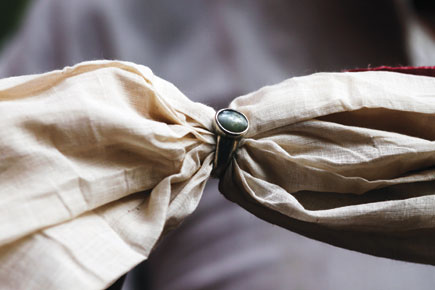 Bengal’s once-famous muslin, which perished under British rule in the late 18th century, is poised for a glorious comeback.


The forgotten art of the fine weave, which had once made Bengal muslin worth much more than its weight in gold, has been revived and is already catching the imagination of top fashion designers. Kalna, a small township in Burdwan about 125 km northwest of Kolkata, is cradling this resurgence, thanks largely to the efforts of one master weaver and help from government agencies like the Textile Ministry’s Weavers’ Service Centre, the Crafts Council of India and the state handloom commissioner.

The 500-count yarn—the finest hand-spun in the world now—from kapas cotton that is being woven at Kalna now has won accolades and awards for the small group of weavers of the town who’ve, through a combination of technical skills and innovation, invented a spinning machine that churns out the super-fine thread. The muslin that’s being produced is so fine that when wet and laid over a patch of grass, it would be difficult to point out. The finest muslin sari from Kalna, for instance, weighs a hundred grams and fits comfortably into a small coconut shell.

The muslin revival effort actually started at Nabadwip in neighbouring Nadia district in 1992. A group of weavers there managed to produce 500-count muslin—that is, a thousand metres of yarn spun so finely as to weigh only two grams—in the mid-1990s. But the cost of production was too high and the technique did not prove to be sustainable. It was then that Rabindranath Saha, a 13th generation master weaver from Kalna, decided to take up the challenge. “I had heard about the fine muslin that used to be made in Bengal till about 250 years ago from my grandfather, who had also been told about it by his great grandfather. There are many stories about Bengal muslin, including one about Aurangzeb, who on being told about the soft and near transparent muslin from Bengal by his daughter Jahanara, refused to believe her. She laid out a length of muslin on the grass one morning, and Aurangzeb, failing to spot the cloth, rode over it and was startled when she showed him his horse’s hoof marks on the muslin later.

The Mughals and royalty from many parts of the Subcontinent extended patronage to Bengal muslin (or ‘Dhakai’ muslin, as it was known then, since Dhaka was the capital of Bengal) , which consequently flourished,” Saha, 64, tells Open. At that time, says Saha, Bengal muslin was finer than the 500-count one he makes now. “The finest muslin then (250 to 300 years ago) was of 1,000 count (cloth made from a yarn so fine that it is not only invisible to the naked eye, but a 1,000 metres of which would weigh only one gram). One ‘khanda’ (2.5 metres) of even 300 count muslin used to cost a princely one hundred rupees, at a time when the price of gold was Rs 15 a bhori (11.66 gram),”says Saha. The 1,000-count muslin was much more expensive: a document at the archives in Hazar Duari, seat of the Nawabs of Murshidabad, shows that Nawab Murshid Quli Khan (reign: 1717 to 1727) bought one khanda of the 1,000-count muslin from a weaver for Rs 400. At that time, a mid-ranking court official there would earn Re 1 a month and live comfortably on that.

The sad decline of Bengal’s muslin, which finds laudatory mentions in Ptolemy’s Geography and accounts of ancient Chinese travellers, started with the advent of the British, which coincided with the decline of the Mughals and other rulers all over the country who were patrons of muslin. The death knell was sounded by the advent of mill-made cloth in Europe and its large-scale import from Britain. The British systematically destroyed the Indian handloom sector, even torturing master weavers and cutting off their thumbs (this happened to many muslin weavers in Bengal), so that British-made cotton cloth from their mills would find a good market in India. Since the coarsest mill-made cloth was considerably cheaper than the fabric made from the finest hand-spun yarn in India, the art of weaving started disappearing and slowly became extinct.

The muslin revival efforts started in Bengal only in the late 1970s, and, interestingly, coincided with similar efforts in Bangladesh. The project was spearheaded by the state handloom commissioner’s office, which roped in the Union Textiles Ministry, the Crafts Council of India and the Khadi & Village Industries Commission (KVIC). Groups of weavers were provided technical help and monetary assistance to spin fine yarn from the best cotton to finally weave a fine cloth. “But in the initial years, the weavers were unable to spin the fine yarn necessary for making muslin. The spinning machines were not up to the task and the weavers also were inexperienced. It was only after more than a decade of hard work and constant technical upgradation and innovation by textile engineers commissioned by us and the other bodies, that the weavers could produce a 500-count muslin cloth in the early 1990s. However, that success was short-lived since the spinning machines could not produce consistently fine yarn and the whole process also proved to be very expensive and thus unviable,” says an officer at the state handloom commissioner’s office in Kolkata.

Saha was aided by the KVIC, which provided technical expertise to him to make charkhas (hand-operated spinning machines) that were crucial to making the fine yarn. “After years of painstaking effort and a lot of innovation, not only with the charkha, but also the whole process of spinning and weaving, could I manage to produce 200 and 300 count cloth in 2002 and 500-count muslin in 2008,” says Saha, who has won many awards, including the Sant Kabir Award (annual award given to master weavers by the Union Textiles Ministry, beginning from 2009) earlier this year.

A master weaver from Murshidabad, Kalicharan Sharma, had re-discovered the technique of spinning the fine yarn a few years ago, and Saha learnt it from him. Making the 500-count muslin sari— a 5.5 metre saree requires 60,000 metres of yarn to make—is a laborious process that takes more than two months for a team of three weavers. “Making muslin is a very sensitive and lengthy process that takes loads of patience. The yarn breaks frequently. Spinning is done only early mornings and after dusk. The heat during the day breaks the thread. Earlier, very young girls aged about ten years or so would spin the yarn with their nimble fingers. I’ve modified the charkha to replicate those nimble fingers. I’ve modified the apron, rubber rollers, gears and other parts of the machine. I’ve also re-invented the original technique of weaving muslin,” he says.

Saha sources his cotton from Guntur in Andhra Pradesh. His ambition now is to make 700 and 800-count muslin cloth before making 1,000-count muslin which, he admits, would be so fine and delicate that it cannot be worn. Saha has formed a weavers’ cooperative in Kalna that trains and offers expertise to other weavers from all over Bengal in the art of making muslin. A metre of Saha’s 500-count muslin sells for Rs 1,600; a plain sari, without any embroidery or embellishments, costs nearly Rs 10,000. But demand is very high and Saha can’t meet the requirements of his customers. The waiting period for a plain sari is over two years.

Saha’s muslin has been worn by many, including Narasimha Rao, Jyoti Basu and a host of celebrities. He also presented a muslin turban to Prime Minister Manmohan Singh recently. “The muslin that this weaver makes is amazing. I’ve never seen such fine cloth. It’s almost transparent. I’m planning to get some muslin sarees from him and then engage my team of embroiders to make them into exquisite creations,” Shamlu Dudeja, the renowned ‘kantha’ revivalist, tells Open. Fashion designers Anamika Khanna and Kiran Uttam Ghosh are also planning to make garments from Bengal muslin. Sabyasachi Mukherjee is learnt to be working on embellished muslin saris that he plans to showcase in the near future. With Bengal muslin thus set to scorch the catwalks, the glorious days of this unique fabric seem to be back again.