It’s not just Hindi and Tamil. The online encyclopaedia is serious about Wiki versions in Sanskrit, Pali and forgotten languages like Angika too 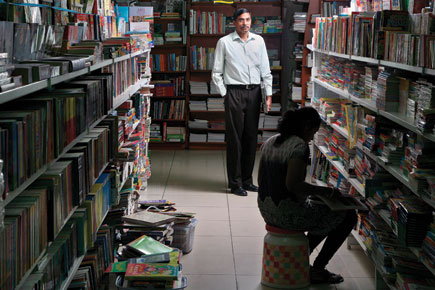 It’s not just Hindi and Tamil. The online encyclopaedia is serious about Wiki versions in Sanskrit, Pali and forgotten languages like Angika too


Do people know the power of their ideas? Take Jim Wales, founder, Wikimedia, for instance. Could he have pictured a decade ago that a government-run primary school in a remote village in Tamil Nadu would use Tamil Wikipedia for learning things beyond their syllabus? “It was a great moral booster for us and gave us hope that it is only a matter of time before other schools use it too,” says A Ravishankar, who is a Tamil editor and contributes to Wikipedia, Wiktionary, Wikibooks and Wikisource in the regional language.

Known for its other allied projects such as Wikiversity and Wikiquotes, Wikimedia’s most popular one, however, remains Wikipedia, a free-for-all encyclopedia on the internet that can be edited by anyone. Available in more than 275 languages, Wikipedia is used by more than 400 million people every month, while nearly 11.5 million monthly edits are done on its articles.

Back home in India, Wikipedia has a presence in 22 languages, with more than 20 in incubation stage. One of them is Angika, a language spoken in the states of Bihar, Jharkhand and West Bengal and written in the Devnagari script. “I had drifted away from my mother tongue, but learnt to value it later. I don’t want people like me to forget it, and thus the initiative,” says Kundan Amitabh, who also edits in English and Hindi. Interestingly, he has also worked on Google, the internet search engine, in Angika and translated the interface.

For a new language to get onto Wikipedia, it has to be incubated first. Content is translated and localised in the language. A language approval committee then monitors the consistency of articles being contributed and decides when the language can go live. “Since the language is in incubation, few people know about it. But I push it by talking to the local media, reaching out to local schools and colleges, and asking them to contribute,” says Amitabh.The Angika page will go live anytime now, he says.

Abhay Natu, who has been a user and editor since November 2005, says Marathi Wikipedians want their page to grow to a point where it becomes a premium yet free reference site, accessible to anyone who can read Marathi.

That’s one of the charms of Wikipedia—that it is available in your own language. And if not, you may take the initiative and get it in your vernacular. And as Arun Ramarathnam, executive committee member, Wikipedia’s Indian chapter, puts it, “Indian languages are the language of choice in smaller towns and villages. It is important for the knowledge of the world to be available to people in these areas in a language of their choice.”

That is exactly how Sankalp Dravid, an editor in Marathi, got pulled into it. In 2005, he chanced upon the Marathi page while searching for Vande mataram and Bankimchandra Bose. “I spotted some shuddhalekham (grammar) mistakes and tried to rectify them.” But the real contribution started when he read a book by well-known Marathi artist Ravi Paranjpe. “It was about the great artists of the world like Degas, Monet, and so on. I decided to put a little bit of information about them on the Marathi page.” Soon, following other users’ edits, Dravid learnt more about editing styles and syntax, and was contributing more and more.

What is lacking, however, is awareness. While most people know about English Wikipedia, not many know it is available in their own spoken language. Says a Tamil editor, who prefers to be known by his pseudonym Sodabottle, “For English, there is an abundance of sources such as Google books, internet editions of newspapers and magazines. There is little content available online in regional languages. That there is no standardisation of format makes it tougher.”

Arjun Rao Chavala, editor, Telugu, and president, Wikimedia’s India chapter, holds ‘Wiki academies’ on a regular basis in Andhra Pradesh. “These are half-day events covering Wikipedia, typing in the local language and Wikipedia policies. They include hands-on sessions,” he says. These sessions are held in universities and colleges with good internet access.

Being a Wikipedian is not only about online campaigns, editing and writing. It involves everything from organising offline meets and workshops, to taking the movement to schools and colleges, without asking for anything in return. “But it’s great interacting with people I would not have met if not for Wikipedia,” says Natu, who has also met Wales. For Bengali editor Jayanta Nath, the surprise visit by Tamil editors Tinu Cherian and Shiju Alex to Kolkata was memorable. “They had been pushing me to conduct a workshop, but I was a little wary. I thought ours (Bengali Wikipedians) is not a big community and no one would come.” Well, what do you know? They held one last December, and 18 people attended.

There is also the technology hurdle to overcome. However, most regional language Wikipedians agree that the ease of using technology has increased manifold since the early part of the century. For languages such as Tamil, there are open source content management sources that are Unicode compatible.

That the Indian chapter of Wikipedia is now registered with the Registrar of Companies also helps greatly. “It will ease networking with language forums and government bodies,” says Ramarathnam, “Our focus in on building more local focus groups and training core teams to start working independently.”

He also wants more such Wiki communities to grow in peripheral states of India, such as those in Northeast India. “The governments there are too caught up with internal priorities, but we still need coverage from there,” he says.

With Wikimedia set to open its second office outside the US in India is another reason for cheer. “Being in India works for Wikimedia, given the country’s diversity, plus internet and mobile telephony penetration in India,” says Bishakaha Dutta, the first Indian trustee at the Wikimedia Foundation.

“There is so much information to be shared, and although the number of contributors is always smaller than the number of readers, Wikipedia helps give such people a platform to contribute and collaborate in their own small way,” says Chavala.

But most of all, Indians need to turn hungrier for information and analysis. “That would be a slow process and a macro-sociological phenomenon,” says Sankalp Dravid. Which, of course, is a different story altogether.