At the First Indian Annual Comic Con, compulsive doodlers will get to meet published graphic artists 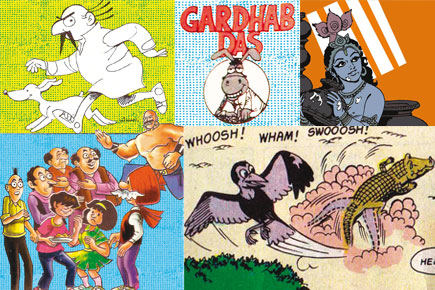 At the First Indian Annual Comic Con, compulsive doodlers will get to meet published graphic artists


Very early in his Alcatraz school days, this Natraj 2B pencil had an itch. An itch that couldn’t be shared with his pipe-smoking art teacher, who drenched his pupils—in­cluding the one at the unpointed end of this pencil—in water colours, pastels and oil. So this doodler persevered qui­etly and industriously behind the fore­boding pages of inorganic chemistry, setting graphite to paper.

Those early pencil strokes attacked the smooth, svelte legs of Betty and Veronica from Archie’s. They went on to silhouette the breasts and leather-clad butt of Modesty Blaise. In between, there were naughty renditions of Axa and Heavy Metal (an X-rated animation movie that was fortuitously screened in this all-boys’ residential school founded for royals). Dormitory mates were mighty pleased, and the Natraj knew the ‘artist’ in him had earned his first few critiques. Today, he knows that these once-adolescent critics would skewer Sarnath Banerjee’s idea of graphicopulation in the 2007 graph­ic novel Barn Owl’s Wondrous Capers.

Doodles aside, the Natraj’s graphite gradually crumbled away under the ravages of time and malnourishment. Others too have had their passion lose its ardour in the absence of steady in­spiration and encouragement.

So come 19 and 20 February this year, graphite hopes will spring anew. The first Indian Comic Con, a desi version of an annual San Diego event supported by the Indian Institute of Cartoonists and Vimanika Comics (among others), is scheduled at Dilli Haat in Delhi. With the confirmed participation of Indian legends such as Uncle Pai (Amar Chitra Katha), Pran (Diamond Comics), Ajit Ninan (Moochwala) and Jayanto Banerjee (Gardhab Das), the fest promises to meld graphite and ink with a rich lega­cy that still yearns to be called serious art in India. Acclaimed graphic nov­elists such as Orijit Sen and Sarnath Banerjee will also be in attendance.

“For a comic book fan in India, this is the best place to be,” says Jatin Varma, a participant who heads Twenty Onwards Media that among other ven­tures publishes Random Humor Digest, an Indian version of Mad, “For pub­lishers, there would be a lot of material and artists at one place annually. As for kids and students who doodle at home, they’ll get to see all their favourite char­acters and books. Overall, this is go­ing to be a fun event.” About 25 kiosks, manned by a mix of publishers, retail­ers, artists, animation studios and even software companies that create appli­cations for online comics, will be part of this fest, confirms Varma.

Sumit Kumar, 23, a budding graph­ic novelist and standup comedian who has also written portions of the on­line sensation Savita Bhabhi, is excit­ed about the event. He’ll be there pro­moting his graphic novel The Itch You Can’t Scratch. So will Adhiraj Singh, 24, a graphic narrator who has been busy drumming up eyeballs for his own comic book Udbilao Manav. Both grew up on a steady dose of comics as part of their childhood, and will get a chance to show their work to the liv­ing legends of the art form, apart from the Indian publishing arms of Archie, Marvel and DC comics, at the event.
For casual fans and onlookers, what the conference promises is the first ever showcase of Indian comics such as Moochwala, Gardhab Das, Pinky, Billu, Chacha Choudhary and Kalia the Crow in their proper sequence.

This Natraj will be there with his re-sharpened tip and best companion, the sketch book. And without the fear of a  water colour deluge.