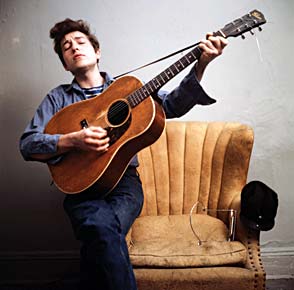 Bob Dylan, the poet laureate of rock’n’roll seems stuck for inspirational lyrics in his new album


Being Bob Dylan can be a heavy burden. Here is a legend whose lyrics have been a generation’s anthem. He wields so much influence on rock’n’roll that he was not only dubbed its poet laureate, but also awarded a Pulitzer citation for his contribution to pop culture. He’s traversed genres like a cross-country athlete—from blues and gospel to jazz and swing to folk and country. More newsprint and reel has been devoted to his life than any other musician. And a moniker, Dylanology, has been institutionalised to surf his vast repertoire of political, social and philosophical ditties.

So, when creating a new album, does Dylan compete with his own legend or just ride on his rep? He’s seen everything, done everything and been everywhere. Does he even need to come out with an album, for crying out loud! Well, French director Olivier Dahan could take some credit for this one. It was his request for a single for an upcoming film that started it all.

It’s perhaps unfair to expect a mind-blowing album from Dylan each time. But don’t think he’s reached artistic complacency. By turns, his latest album, Together Through Life, both delights and disappoints. It is a twilight tale of wistful melodies—an inference drawn from I Feel a Change Comin, in which he cites “the fourth part of the day’s already gone” from Nehemiah 9:3. This song also contains the most Dylanesque moments in the album. The rest of the songs suffer lyrically. That could be because all but one have been co-written with Robert Hunter, of The Grateful Dead fame. Their previous collaboration on Down In The Groove (1988), too, hadn’t gone down well with his fans.

Most of the songs swagger on a bluesy note. Dylan’s vocals sound heavily sandpapered now, so he growls and croaks in the first track, Beyond Here Lies Nothin. The next track, Life Is Hard, a heartbreaking country-folk ditty, is what appears in Dahan’s movie. Shake Shake Mama and Jolene (not the Dolly Parton one) add some tango and bounce to an otherwise relaxed album. Check out Dylan’s gleeful sarcasm on It’s all Good. The menacingly sweet If You Ever Go to Houston will make you want to break into a waltz, not in the least because of the rhythmic twangs of Tom Petty guitarist Mike Campbell.

This is an album in which Dylan muses on life passing by and the inevitable meeting with the Grim Reaper. But he elegantly peppers the album with sardonic and romantic jokes to elevate the mood.