The Sound of Winter

If you think Delhi is a musically dead city, tune in once again and listen to these notes blowing in with the cool winds. 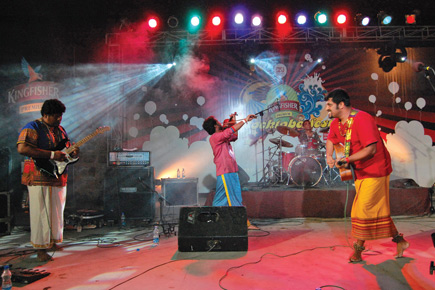 If you think Delhi is a musically dead city, tune in and listen to these notes blowing in with the cool winds.


Delhi is certainly not known as the music capital of India. How many times have we cribbed about international artistes flying to Mumbai or Bangalore without so much as a glance towards this city? Any seasoned musician will tell you that a performance in Delhi in the summer is equivalent to a workout in the gym, no matter how well air-conditioned the venue may be. But come October, this is a city undergoing transformation. Delhi in the winter has over the past few years been turning into a music destination, luring you with the sound of your choice.

The first sound checks of the annual pub rock festival has bands from across the country sporting an enthusiastic glow that falls in perfect sync with that of classical musicians tuning up for the open-air ‘Music in the Park’ series in Nehru Park. The pub rock festival showcases some of the best talent within the domestic rock circuit, from bands like Half Step Down to Soulmate Them Clones playing across the city’s pubs. And ‘Music in the Park’, spread out between October and March, brings the best of the Indian classical fraternity to Delhi with a series of free concerts amidst the greenery of Nehru Park, where performances by Pt Ravi Shankar, Zakir Hussain, Pt Shiv Kumar Sharma are a regular feature. Bringing a global flavour are the famous Brazilian guitarist Yamandu Costa, Blues legend Buddy Guy and Jazz greats like Herbie Hancock, who’ve created a musical explosion in the city over the last few winters.

The fact that the days can be utilised as much as the evenings has Delhi’s music fraternity buzzing like never before. Recent weekends have seen everything from the annual Jazz Utsav to experimental sessions, in the process bringing alive diverse parts of the city. For instance, the amphitheatre at the Garden of Five Senses, with its fairy-tale setting, has become quite the venue for evening weekend sessions. With not a trace of the surrounding hustle and bustle to disturb you, bands, DJs and, at times, even international musicians create a music atmosphere for a free-spirited audience that can take in everything from electro pop to South American tunes.

Similarly, Sunday music sessions called ‘Shanti Sundays’ bring a range of mellow electronic DJs out in the open at venues that have an open-air terrace or garden to utilise. The backdrop could be anything from a mystic Mehrauli rooftop overlooking remains of old forts and the Qutab Minar to the serenity of Lodhi Garden. Evenings have their own charm with reggae, electronic, hip-hop and hard rock. Sometimes, South American outfits, too, come down to tickle the city’s hidden Salsa bone.

So what is it about the Delhi winter that seems to synergise so well with things musical? Amit Saigal, head of Rock Street Journal events, says, “It’s a combination of weather and also the best time on the student academic calendar to make the most of what’s going on.” His team organises a series of jazz, rock and electronic events in the city.

While the events, musicians, venues and weather may be in place, nothing can dampen things more than a poor turnout or the wrong crowd. So Saigal makes sure that a whole breed of promoters are roped in to make sure the word is spread right. Campus posters, SMSs, emails, radio teasers and Facebook are pushed to the maximum to create pre-event sensation. Rudy Nautiyal, a music promoter, feels the rush during the season. “Sixty per cent of the budget we get for the year from our sponsors for music events in Delhi is kept aside for the period between October and March. It’s holiday season and now, with the indoor smoking ban, outdoor venues work really well with music as people don’t find it hot, they can smoke freely and attendance is high!”

“Contrary to what many think, Delhi is quite the hub for independent musicians and some really chilled-out people who know their music. It only becomes more vibrant in the winter,” says Gautam Aurora, who runs TLR Café, a popular hub for a variety of music, ranging from reggae to open jams.

While there has always been a musical twist to the Delhi winter, the variety on offer has been on the grow. Max Mueller Bhavan recently brought down a delegation of German DJs and musicians for a weekend called Global Groove. It also held a convention where the electronic music fraternity of both countries could exchange notes. And January will see a French festival spread itself across the month with performances from different French acts. So shed any notion that the city is not ‘live’.

For a weekly update on music in the city, go to tlrcafe.com for reggae, open jams and classic rock; iccrindia.org for experiences ranging from a South American band to Flamenco; spicmacay.com for classical music; cafemorrison.com for rock and roll; and elevateindia.com, audioashram.com and mgmh.com for electronic and experimental acts.