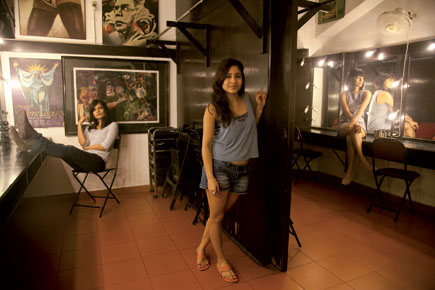 They are young, feisty and restless, unafraid to speak their minds. They are all actors, but acting isn’t all they want to do. Theatre is their origin, and each of them has managed to make an almost seamless transition from the stage to the silver screen in recent films. Shweta Tripathi from Masaan (2015), Sayani Gupta from Margarita, With a Straw (2015) and Aditi Vasudev from Sulemani Keeda (2014) are three young performers who made their debut as lead actors with movies that were mould-breakers in many ways.

Their performances were the highlight of their films and they may very well be the future super-heroines of Bollywood. But today, what really binds them together is this: they all began their acting careers in Mumbai by sounding out an ‘Om’ on the Prithvi rangmanch (stage), to which they believe they owe it all. “The first time I was performing at Prithvi, I reached four hours before call-time and pestered the caretaker to open the doors for me. I did jhaadu, and after my warm up, when I said my first Om, I understood that nothing will feel the way I was feeling at that point,” says Sayani Gupta, taking a long sip of her cold-coffee as we sit at the ‘adda’ (the actors’ jam point in Prithvi) re- living story after story. The other two acknowledge the sentiment almost in the same breath. “I always wanted to be an actor, but theatre showed me that my dream was so much larger than I ever thought. I could do so much with it,” adds Aditi, who we first saw as Rishi Kapoor’s hot-headed teenage daughter in Do Dooni Chaar (2010).

It’s not like there haven’t been young actors who started their careers with theatre. The influx of stage actors is only increasing by the day. But it’s the choice of films this group of 20- somethings made that makes them noteworthy. An independent, ambitious photographer unafraid to let go of love (Vasudev in Sulemani Keeda ); a small town girl ready to break the barriers of cast to marry the man she’s with (Tripathi in Masaan); a blind activist who is gay and falls for a woman with a physical handicap (Gupta in Margarita, With a Straw)—these are rare, unflinching roles not written often for female actors in our films. To understand and recognise these parts and play them with both rawness and finesse is the challenge Sayani, Aditi and Shweta met. “I had people like Raju Hirani come up and say how refreshing he thought the love story in Masaan was. When we were playing it out, the entire set was falling in love,” says Shweta, still reeling from her red-carpet moment at the film’s Cannes screening.

As they sit speaking about the journeys that led them to their big breaks, one senses how starkly different they are as people. Aditi is the more thoughtful one, questioning her every response and move in her head, while Shweta seems more instinctive and wide-eyed, and Sayani on the other hand can hardly contain the fire in her belly, belting out opinions as though preparing for the part of an activist. Their personalities are reflective of their upbringing and struggles to cope in a city that isn’t their first home. “Till I was eight, I grew up in Lucknow, where we’d find animals on little plots of land to play with. That’s my earliest memory as a kid, and after that it’s all the memories I gathered from boarding school, where I was among hundreds of other angsty teenagers trying to figure life out. I wanted to start working ever since I was five,” says Aditi, who was always a rebel and moved to Mumbai at the age of 18, after attending college for just one day. She started her career in theatre with the legendary Satyadev Dubey’s play titled Khuda Ke Liye Dekhna Mat, and now the very mention of her presence in a production manages to draw crowds.

Shweta says she had a protected childhood in a Delhi home with an IAS officer and a teacher for parents, and all the freedom in the world. “When I was studying at NIFT (National Institute of Fashion Technology), drawing straight lines at four in the morning, I was like, ‘What am I doing here? Where are my songs?’ I went to my parents and told them, ‘I want to start acting.’ I wish they had objected a little bit, because even there I did not get a chance to ‘fight’ for what I wanted, you know,” she says. Shweta started her own theatre firm, All My Tea, at the age of 23 after she was rejected at her first play audition in Mumbai, and has produced multiple plays since.

Sayani, who graduated from the Film and Television Institute of India (FTII) in Pune a few years ago, is a Calcutta girl who dabbled with the arts from a tender age and went on to join Atul Kumar’s Company Theatre once she came to Mumbai. “Sometimes I’d do nine auditions a day, go for rehearsals in the evening and return home lord knows when. But it was fine because I was learning so much,” she says.

Their lives in Mumbai were different from those of the usual Bollywood aspirants. They weren’t aiming for glossy potential blockbusters. They did not belong to film families, and in a sense they came with a blank slate. They chose to look beyond the 70 mm format, for example. They ventured into spaces that were alien and told stories their own way. The rehearsal space was their school and everything else followed. “The first time I read for a play, it was for a musical for Quasar Padamsee. I was so bad, there was no chance I’d get selected. But then I started my own theatre company and joined Thespo, which changed everything. I could do whatever I wanted in that rehearsal space. That was freedom to explore I had been looking for my whole life. It’s ironic you find it in a room with four walls, but you do,” says Shweta.

It wasn’t easy, but it’s how they learnt to discover the actor in them. “An actor’s life is difficult because you don’t know where your next meal is coming from. You have to be your own mother, father, counsellor. The insecurity can reach your soul and make you doubt yourself. It’s a great self-affirming process you go through because you have survived something and come out stronger. That’s where stage helps. You see someone doing a good improvisation and your world shifts,” says Aditi.

Interestingly, they have all also been associated with a play called Cock, which Shweta produced and both Aditi and Sayani performed in. After making a few unprintable jokes about the title of the play (ones they insist never go stale), you discover that this single performance defines all three in more ways than they realise.

Cock, about a gay couple and a girl, explores various aspects of young minds grappling with the experience of love and sexuality. “It wasn’t Shakespeare that if you say your line the way it’s meant to be said, the emotion will just show. This was a script we had to put a lot of ourselves into,” says Shweta. “The role of the girl depends on how you look at life, love, complexities in situations, your understanding of words, humour. It’s a performance that can go anywhere depending on your thought process. I have done monologues of Cock many months after and realised that the moment you distance yourself from the script, your whole approach changes,” says Sayani.

It’s undoubtedly their thinking minds as actors that bled into their performances in cinema as well. Film was a medium where the grammar was nothing like on stage. Confesses Aditi, “I was struggling on set till the last day of my shoot in Do Dooni Chaar. I felt constricted—like it wasn’t rewarding enough. But it was towards the end of the shoot that I began to realise that it’s a whole new language altogether.”

Sayani’s film school training made her a bit more familiar with the medium, but she knew it was not one that could be dictated by an actor. She remembers being accused by directors of putting too much thought into a scene. When she was on set for Margarita, she’d pretend to be blind all day and do all her activities in the same state of blindness. “People around me felt deceived by the end of it. But it’s not an exercise I can do on camera. It’s the process I learnt through stage, but it’s the kind of preparation that makes it believable on camera,” she adds.

They now confess to falling in love with the medium of film, albeit gradually. Sayani cites works of filmmakers like Iranian auteur Asghar Farhadi as inspiration. “I love conflicts between people, especially between closed relationships,” Aditi says. “Like the dynamics between us on this table—real life conflicts,” Sayani adds. There’s a slight sense of competition over who’s doing what next, but it’s a healthy one. “In theatre, we somehow always look out for each other. If Sayani gets a role I auditioned for, I’ll at least know that they took an actor,” says Shweta. More than anything, it seems like they know exactly the kind of cinema they want to be part of.

Sayani’s next appearnce on screen will be in Anurag Basu’s Jagga Jasoos as the close friend of a character played by Ranbir Kapoor. Shweta will be seen in Haramkhor with Nawazuddin Siddiqui. And Aditi is still in between scripts, waiting for the one that really calls out to her. They don’t exactly have a plan, and they seem more than happy with it. Aditi may go to study theatre at London’s Royal Academy of Dramatic Arts. Shweta wants to be rich enough to sponsor plays for the youth. And Sayani, who’s actively fighting the good fight for her fellow filmmakers at FTII, hopes she can keep the fire burning till the very end. “I’ll speak up for everything I believe in, be it through my roles or otherwise,” she says.

These are great times with some great storytellers, and they realise they are spoilt for choice in some strange way. “The fact that a Sulemani Keeda, Masaan, Margarita… and Bajrangi Bhaijaan all exist in the same space, and we get to do plays when we want, proves how lucky we are.”

Our banter ends with Shweta giving Aditi a little lecture on how to pose for a photo-op. “Cross your legs and pout,” she says, puckering her lips. “No way!” Aditi giggles. The girls are learning the ropes and know that they have a long way to go. Their unanimous bucket list of directors includes Dibakar Banerjee, Vishal Bhardwaj and Imtiaz Ali. Are they listening?