Those familiar with Rabindranath Tagore’s works will be surprised, shocked even, to find his poems reinterpreted in modern choreographies by noted Odissi and Bharatanatyam dancers. 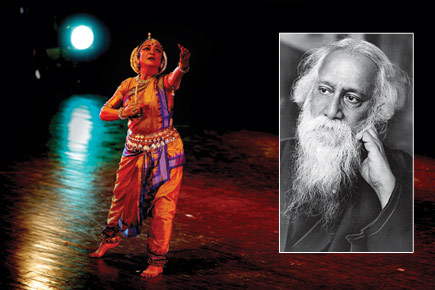 Those familiar with Rabindranath Tagore’s works will be surprised, shocked even, to find his poems reinterpreted in modern choreographies by noted Odissi and Bharatanatyam dancers.


Kiran Segal will never forget her first encounter with Rabindranath Tagore. She came across his photograph as a child, and couldn’t help but wonder at his unkempt appearance. “The image I had of him was of a huge man in a long robe with tousled hair. As a kid, I would always wonder why he didn’t ever comb his hair,” chuckles this noted Odissi dancer. As Segal grew up, she started getting more familiar with Tagore’s works. And yet, there was something missing. She felt that she hadn’t discovered him as a person, the man behind the genius. And so, she used his poems to create a window into his mind. This forms the basis of her latest choreography, Divya Namaskar, a one-and-a-half-hour-long interpretation of Tagore’s poems, which she performed at Gurgaon earlier this week.

Segal is one among few artistes in the country who are trying to reinterpret Tagore’s poems through dance. While his plays and music have enjoyed the spotlight for the past several years, his poems had to be content with being translated or recited by aspiring poets. Few actually went beyond the literal meaning of the verses. Sceptical of arousing the ire of Tagorephiles if they got the nuances wrong, artistes outside of West Bengal would usually leave his poems alone. “Artistes, especially in Bengal, have tried to interpret them through various mediums. However, it pains me to see that they are content with merely taking the literal meaning of the poems. There is a deeper bhavaartha to each line and that has been completely missed out on,” says Kolkata-based Odissi dancer Sharmila Biswas.

Now, artistes like Segal, Biswas and Delhi-based Bharatanatyam exponent Navtej Johar are trying to create a comprehensive understanding of Tagore’s poems. No longer are the poet and the verse isolated. There is a conscious effort to infuse Tagore’s personality into their creations as well. Tagore had once said, “You can’t cross the sea by merely standing and staring at the water.” They are using this very principle to go beyond the surface, and delve deeper into his ocean of works.

Biswas believes it requires a different kind of mindset to interpret Tagore. “You have to read his writing, go through his biographies and plays in order to gain an understanding of his mind. I am not sure how many dancers are prepared to go through this,” she says. Segal agrees. She read Tagore’s letters to his friends, his plays and a diverse selection of poems before conceptualising her dance. “He came across as a philosopher, a dreamer, a person who was really worried about his country and wanted to do something about it,” she says. Segal has also used this soft, dreamy aspect of his personality in earlier dance choreographies such as Ekla Chalo and Nirjharer Swapnabhanga.

One thing that has worked in favour of these artistes is the expiry of the copyright on Tagore’s works. Considering Visva Bharati’s monopoly on Tagore’s works, there was a constant fear among certain artistes that even a slight deviation from the expected style would land them in trouble. The copyright ended in 2004, which was also the year the prestigious Rabindra Utsav in Kolkata was born. Conceptualised by the late theatre personality Habib Tanvir in association with Happenings, a Kolkata-based organisation, the festival sought to take Tagore out of West Bengal to other parts of the country as well. “The artistes were free to interpret Tagore in their own style. Habib saab had just one condition, that the concept be original and not a mere repetition of past productions,” says Viji Iyengar, one of the organisers at Happenings.

It was this freedom that appealed to Chennai-based Bharatanatyam guru Chitra Visweswaran when she was invited to perform at the festival last year. She tried to interpret seven stages of a woman’s life through Tagore’s works. “He has written so beautifully about the blossoming of nature and awakening of senses. Whether it is the carefree abandon of childhood or the awakening of love, there are poems for each stage of life,” says Visweswaran. She based her choreography on the Tamil translation of Gitanjali that her late husband had once worked on for a television production.

In Visweswaran’s opinion, Tagore’s poems help one relate to life better. “One of the stages portrayed in my choreography is that of widowhood. When I was invited to the festival, I was still coping with the loss of my husband. One of Tagore’s verses made me realise that while my husband may not be present in the physical world, he is now part of cosmic energy, which is a larger cyclical divine process. It helped me relate to my loss better,” she says.

However, interpreting Tagore at will and then performing it is not an easy task. It can be intimidating to perform in front of an audience that has claimed Tagore as one of its own and won’t take deviation lightly. Segal had a bad case of nerves when she performed at the Rabindra Utsav last year. Many of her Bengali friends had told her to leave Ekla Chalo out of her performance as it had been done to death in the past. She listened to her heart and included it in the show.

Deviating from the conventional path of using Rabindra Sangeet as the background score, she engaged a young jazz musician, Neel Dutt, to compose the music. The result was a haunting melody created by the coming together of myriad instruments like the Spanish guitar, Egyptian drums, esraj, sarod, pakhawaj and the Odissi mardala. The response that Segal got from Kolkata was unprecedented. “After the show, a woman came up to me and said, ‘Didi, I am so happy that you could see the spirituality of Tagore.’ After that she just fell at my feet. I was shocked, but there couldn’t have been a greater compliment,” smiles Segal.

As these stalwarts inch closer towards unravelling the genius of Tagore, their choreographies also change and evolve in the process. For instance, Segal had originally conceptualised Bashi as a solo. “Two of my dancers were simply hanging around, and I asked them to pick up the dance as well,” she says. One day, when she chanced upon the two practising together, the beauty of the composition took her by surprise. She immediately made a change, and included them as the shadow of the flute. “Sometimes these shadows are very prominent and at times, they are just in the background, forming a frame for the main dancer,” explains Segal.

At times simplifying, at times embellishing the choreography, the artistes are not content until they hit the right note in the choreography. “One has to see the capacity of the language. After all, one has to convey something to the audience. If it is too abstract, the creation will fall flat. At times, it is better to simplify things; after all, you can’t intellectualise art,” Segal says.