The Poet of Poop

The mystery of why Joginder, father of the fabled lota dance, has fans just about everywhere. Even abroad 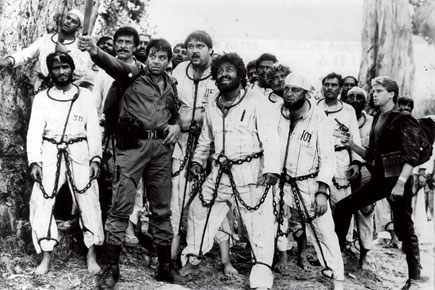 The mystery of why Joginder, father of the fabled lota dance, has fans just about everywhere. Even abroad


Camp sees everything in quotation marks. It’s not a lamp, but a ‘lamp’; not a woman, but a ‘woman’. To perceive Camp in objects and persons is to understand Being-as-Playing-a- Role. It is the farthest extension, in sensibility, of the metaphor of life as theatre

You need a special sort of brain to invent the lota dance, or potty rap, as it is known in somewhat better civilised parts of the world. And Joginder, according to his devotees, was blessed with it in ample measure. The lota dance is from the 1980 film Teen Ekkey, and by any reckoning, has a cyber cult following of its own. It opens with Joginder aka Rocky (pronounced for some strange reason as ‘Rakhi’) engaged in a lovers’ tiff in a mangled Goan accent with a rather nondescript heroine. “Woh Urdu mein kya bolta…?” (What is that Urdu saying) he coos at her, closing his eyes to recall the full phrase, “Saara Khudai one side hota, joru ka bhai one side hota” (all of creation is on one side, a brother-in-law on the other). Just when you expect her to murmur a counter line, Rocky lets of an unbearable stench. He blames his stomach troubles on eating a dacoit’s leftover roti and entreats her to turn her face with the warning: “Varna shame shame hota.” And then off he scoots to take a dump. To beats of frenzied drums, Joginder with a lota in hand breaks into an impromptu bhangra, making the kind of constipated moves that are only, in screenwriter Kiran Kotrial’s words, ‘fit for a bathroom’. Once done, the music peaks and his dance exuberance intensifies. Seeing him so expressly relieved and full of delight, the woman flashes a Cheshire cat smile. Says Kotrial, “What’s stupefying is that the dance movements are intercut with images of a pig, which denotes—this is my interpretation, I am not sure if it is intentional—that a man’s shit is eventually somebody else’s food.”

Todd Stadtman, a San Francisco- based blogger who has decoded Joginder’s ‘key movies’ at Diedangerdiediekill.blogspot.in, likes to watch the lota dance simply for kicks. ‘It’s about pooping and I have the sense of humour of an eight-year-old,’ he writes over email. ‘At the same time, I am conflicted about it because it leaves me unclear on precisely how a lota works but I have no desire to see Joginder give a graphic demonstration of it. I also like the frequent reaction shots of the actress, who makes for a good audience surrogate.’ If, instead of the lota, the joke was about a flush or commode, Stadtman says, he may not have enjoyed it as much.

Joginder enthusiasts say that while his repertoire may be packed with crummy humour, there is also an undeniable gravity and ambition to his work. He has many admirers like actor Nawazuddin Siddiqui, who was exposed to Joginder from his childhood Budhana days. Years later, he acted for free in Joginder’s Bindiya Maange Bandook. Filmmaker Sajid Khan, who was weaned on Joginder movies, has made the effort to introduce the filmmaker to mainstream audiences through his TV shows. Today, thanks to YouTube, his work is gaining currency in the English-speaking world.

Joginder was everything rolled into one in his movies—actor, director, producer, writer and lyricist. On India’s C-movie circuit, he is a polarising figure. Some berate him as ‘India’s Ed Wood’, that American prophet of badness. Those at the opposite end hail him as a zany genius . ‘God’s gift to unintentional comedy’, to use filmmaker Vasan Bala’s encapsulation. There is something in Joginder that evokes diverse responses of viewers. While much of his reputation rests on the lota cult, that is not his only claim to fame. Though he appeared in around 100 mainstream films (Purab Aur Paschim, Mard and Loha) as a side actor, it is the dozen odd films that he made and acted in that explain his viral popularity. Of them, Ranga Khush, Pyasa Shaitan and Teen Ekkey are unquestionably the most popular. They are full of goofy characters, overpitched acting, awful production values, creaky camera noises and schlocky visual effects. Joginder’s finger was firm on the C-movie pulse.

Take Pyasa Shaitan, a horror film that has acquired the status of a campy classic since its release in 1984. In fanspeak, it is ‘the Citizen Kane of C-movies.’ Joginder plays a ‘thirsty’ Indian Satan terrorising young women. Don’t let the mysterious appearance of Kamal Haasan catch you flat-footed. There are many apocryphal stories swimming around the making of this film. One goes that Joginder re-edited an existing Haasan film and thrust himself into it. Another says that Joginder actually bought the rights of a Tamil movie and remade it—which seems unlikelier than the first story. Pyasa Shaitan has all the elements of a thrilling C-movie: hamming, Ripley’s believe- it-or-not moments and preposterous jump-cuts and effects. A smattering of sleaze has been thrown in to attract what Joginder once called his ‘jhuggi-jhopdi’ (slum-shantytown) patrons, his original fanbase. Consider this spectral rape scene: while other C-grade filmmakers would have opted for barrel-scraping titillation, Joginder depicts the violation by having cosmic rays whoosh over the rape victim’s body.

In another sequence, a female ghost flings a rakhi at her brother, the effect being so strong that he drops dead on the spot. The quality of dialogue is, to put it mildly, cheesy as this exchange between a honeymooning couple indicates:

That Pyasa Shaitan is inscrutable is a matter of consensus among his fans. ‘The strangest film I have ever seen,’ says Stadtman. ‘[It] is pure art channelled from madness; something that a lot of people have aimed for and failed at. Yet, Joginder achieved it organically and without pretence.’ Keith Allison, another American blogger, says, ‘Typically, B-horror suffers from tedious lulls and lazy filmmaking. Joginder is often derivative— sometimes he is just stealing someone else’s movie—but he never takes a breath. There is always something to see, always something going on. If a scene is too slow, he livens it up by drawing dancing skeletons and lightning bolts and fangs upon Kamal Haasan. Usually, B-horrors feel like a quick cash grab but Joginder actually has tremendous love for what he does.’ The production company credited in Pyasa Shaitan is called Jet Speed Movie Makers, hinting perhaps at its fast pace.

It was in a 1972 film called Bindiya Aur Bandook that Joginder uttered his two immortal words: ‘Ranga Khush.’ Three years later, he made a dacoit movie by the same title. In Joginderland, ‘Ranga Khush’ is an expression of joy. On his blog, Stadtman suggests that Amrish Puri’s famous line ‘Mogambo khush hua’ in Mr India owes a debt to Ranga Khush. Earlier, Joginder had accused director Ramesh Sippy and writer Salim-Javed of pilfering the idea of Sholay from Bindiya Aur Bandook. In 2009, Stadtman posted a gushing review of Ranga Khush, though his prime complaint seems to be: why aren’t his films available with subtitles? Stadtman, who obviously cannot speak or understand Hindi, wrote, ‘Ranga Khush depends more upon talk than action to advance its story. As such, without subtitles, it provides little to sustain interest among non-Hindi speakers, save, perhaps, for the sheer hypnotic force of Joginder’s bizarre performance. In his role as Ranga, the actor punctuates his dialogue with an assortment of shrill chirping sounds and gibbering high-pitched shrieks, coming across like some kind of helium-gorged Tourettes sufferer, while serving up the visual aspect of his portrayal in the form of near-constant eye rolling and gnashing of teeth.’

Among Joginder’s other famous acts is a cripple fight in a rundown eatery and one in which a dacoit is pushed into a lake with the water turning black. We later learn that the dacoit hadn’t bathed since he was born.

Some Western critics view a B-movie as the purest form of filmmaking. Many feel that Joginder was the last B-Moghul, a filmmaker in its genuine tradition. “He was operating independent of any studio. All creative control rested solely with him,” says filmmaker Vasan Bala. “He does what he thinks is right on screen. You can watch his films even completely out of context and still have a laugh. Compare him to someone like IS Johar, who was making political statements in the garb of a B-movie and you know that Joginder’s commitment was to entertain.”

“The lota dance,” is Bala’s pat reply. “Ranga Khush is great fun too. The plot is unbelievably silly. Every time he [a dacoit] goes into a cave, he becomes a mamma’s boy,” says Bala who made Peddlers, a crime thriller that won acclaim at last year’s Cannes Film Festival. At Anurag Kashyap’s office, where Bala works as an inhouse director, he talks of “psyching out” interns with Joginder clips. He has colleagues who claim watching Ranga Khush and Teen Ekkey as their guilty pleasure. “People who come to Anurag’s office,” he says, “expect us to be watching Fellini, Godard and Truffaut, but here we are, immersed in Joginder.”

Some secular-minded enthusiasts, like Aseem Chandaver, even discern a pattern of multiculturalism in Joginder’s work: “Many of his protagonists are Muslims, Christians, Hindus and Punjabis.”

A Punjabi, Joginder came to Bombay in the 1960s to make it big in Hindi films, only to be shunned by mainstream Bollywood. That drove him to seek refuge in the B and C centre fleapits. His private life is a mystery. A number of online profiles claim he was a trained pilot who worked with Prime Minister Indira Gandhi before turning actor. Bala was surprised to read that. “Guess he must have spread that rumour himself,” he says. Some fans didn’t even know that Joginder died in 2009, though not entirely unsung as it now seems. A loner, he used to hang out with a bunch of neighbourhood friends, including actors Kiran Kumar and Satish Kaul, in Juhu.

Ashim Ahluwalia, director of Miss Lovely, a film about the seedier side of Bombay’s C-industry, has spoken of witnessing Joginder’s “awkward groping” after a night of booze.

Without revealing much, a fan who operates under the name Peshwa0401 on YouTube, posted this in 2008: ‘Joginder is my friend’s next door neighbour…we used to have a gala time inquiring about his antics… he gets totally plastered every Holi and does this solo bhangra dance at 3 in the afternoon in the society ground.’

Actor Satish Kaul, once a drinking buddy of Joginder, says he was as loud in person as he was on screen. “He treated life like a theatre where only the maddest can survive,” says Kaul, who has since moved to Ludhiana. Asked if actors on Joginder’s sets were paid any fee, given the films’ slim budgets, Kaul cryptically says, “His love was worth crores.” The filmmaker’s last wish, according to Kaul, was to make a Punjabi film as a tribute to his home state. “He worked like a labourer and lived like a king,” says Kaul. “Whenever he was pleased about something, he used to say, ‘Ranga khush’.”