“The piece you ran is blatantly racist”

William Dalrymple takes exception to a piece we ran arguing that India’s life of letters was still beholden to the British. 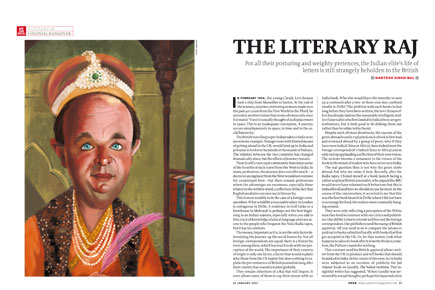 William Dalrymple takes exception to a piece we ran arguing that India’s life of letters was still beholden to the British.


The piece you ran this week [‘The Literary Raj’, Open, 10 January], and the whole-page cartoon you ran with it, felt to me blatantly racist. I am glad to see that most of the comments posted under the piece [on the Open website] seemed to agree that Hartosh’s principal grouse seemed to be the colour of my skin.

After all, I am hardly a pampered expat on a three-year expenses-paid stint. I have lived in this country on and off for more than 25 years—most of my adult life since I first came here in 1984—and have done so on the hard-earned royalties of my books. I have now written five books on India which, whatever their many failings, surely represents a serious commitment of time, work and love to this country.

I conceived, co-founded and co-direct the DSC Jaipur Lit Fest, which is now the largest in the Eastern half of the globe, and brings fine writers together in 12 of India’s 22 official languages. Thanks to the funding we work hard to raise, it does so entirely for free, for anyone who loves literature, in addition to which we raise money to provide bursaries for those who can’t afford it to attend from across India. To date, I and my co-director Namita Gokhale have been paid little more than expenses for this labour of love, which now takes up about a quarter of our year.

Over two-thirds of the writers I and Namita invite are desi. The British contingent, Brown, Black and White, make up a minority within the minority of the firangi  contingent. This year our two keynote international speakers are Turkish and South African, and our special subjects are literature from India’s Northeast, from Palestine/Israel, and from the region now known as Af-Pak. The idea that this joyously multi-vocal festival, which has fought hard to promote Dalit, bhasha and minority literature, represents some sort of colonial hangover is both ignorant and extremely offensive, not just to me but to the whole team who labour to make it happen, and to the sponsors who donate funds to make it possible to present the writers without charge.

So why publish a snide and malicious piece that casually rubbishes both my work and the literary mela I helped to found, by someone who has never once attended the festival? I know Hartosh likes to create controversy and probably even he doesn’t believe half the rubbish in this piece. But racism is never funny, and I don’t see why I should put up with it any more than anyone else.

Just reverse the proposition for a moment. If anyone was to suggest that Vikram Seth had no right or qualification to write a novel about England like An Equal Music, or to live in the large house bought with his advances from his magnificent books, it would be regarded as blatantly racist. If anyone was to suggest that Amit Chaudhuri shouldn’t judge the Booker Prize, or direct Britain’s leading creative writing course, because he was too Bengali, or that Salman Rushdie should not be president of PEN as he was of Kashmiri Muslim origin, it would be regarded as blatantly racist. If an ostensibly liberal magazine in the UK ran an article headlined on its front page, ‘London’s over-rated foreign writers’, it would rightly be denounced as blatantly racist. If they published an unflattering cartoon of, say, Naipaul dressed as an English lord, mocking him for setting himself up as a Brown Lat Sahib in Wiltshire, that magazine could potentially be taken to court.

Yet you do this and more, merrily traducing as a Raj hangover an anti-colonial Scot, who has written fiercely critically of the Raj for a quarter of a century. To me, at least, this reeks of double standards and reverse-racism which is all the more alarming in that your editorial team seem blithely unaware of it, and that it comes from so intelligent a writer as Hartosh (who, incidentally, is very welcome to come to the festival for the first time and see what it’s actually like rather than how he imagines it. I am even happy to buy him a drink if he bothers to move from Delhi.)

My adopted country is in general pretty tolerant of people who choose to come and live here, and I have only once before had to write a letter like this, defending my existence as a writer in the country I love. But I do think there is an important principle at stake here, and to me at least, that piece felt little more than the literary equivalent of pouring shit through an immigrant’s letterbox.

William Dalrymple
William Dalrymple is an essayist and historian. He is the author, most recently, of The Anarchy: The East India Company, Corporate Violence, and the Pillage of an Empire