He may have made James Bond move to his beat, yet percussionist Pete Lockett says he’s still learning. 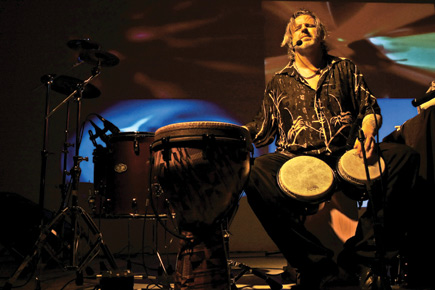 He may have made James Bond move to his beat, yet percussionist Pete Lockett says he’s still learning.


He has the mother-of-all music CVs. Celebrated English multi-percussionist Pete Lockett has performed with the likes of Zakir Hussain, Bjork, AR Rahman and scores of others. He has also arranged and recorded all the ethnic percussion for Hollywood blockbusters like Casino Royale, Quantum of Solace, Incredible Hulk 2. Recently, he was in Bangalore for a show.

Q Of all the instruments you love playing, pick a favourite.

A Tough one. But drums. That’s the one I started off with.

Q What is the challenge with each instrument? Is any one instrument easier than the other?

A I’ve been learning the tabla for I don’t know how many years. But I can’t say I have command over it. You keep on going at it and you enjoy it. There’s no end to learning. Along the way, with all that you know and have acquired about an instrument, you develop a style. The relationship with the instrument is unending (laughs)…

A With my hectic concert schedule, there’s really very little time left. But yeah, I do go on a break from touring and my film work. This happens every now and then. When I do that, I play for myself around four hours or so every other day.

Q People may look at you and be envious of your musical track record. How much does what the world know of you conceal the sacrifices, the heartbreaks, the trade-offs and the disappointments?

A Glad you asked. I have been unbelievably lucky. I know so many great artistes and performers whose lives have been a mess. I have been lucky to have an understanding wife, who is herself a musician. A good relationship is plenty of work too. One shouldn’t take that for granted.

Q Who have been the Indian artistes you’ve enjoyed performing with?

A AR Rahman and Zakir Hussain. Of the two, I’ve spent a little more time with Zakirsaheb. He’s amazing.

Q You arranged music for the new Bond films. Was there anything special or distinct about the music for those movies?

A With Bond, you already have a signature tune. In a lot of the previous Bond films, a lot of the surrounding background score sort of took off from the basic tune. In the new Bond films, there has been a tendency to move away from the main score a bit and to only use it when the moment demands it. Action films make for a lot of fun and thrilling percussion.