The Irony of Iconography 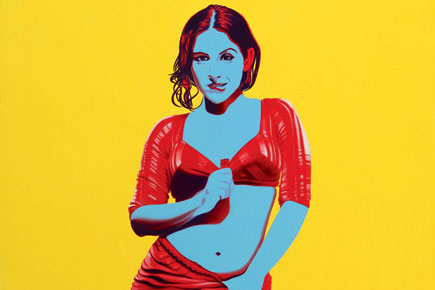 It was in London that artist Viveek Sharma’s idea for his solo exhibition on Vidya Balan took root. He was walking through an exhibition by two greats—Salvador Dali and Andy Warhol, also his favourites—and got immensely inspired. “When I came back to Mumbai, that inspiration stayed with me. I then watched The Dirty Picture and was mesmerised by Vidya, and I thought, ‘Why can’t I do with Vidya what Warhol did with Marilyn Monroe?’” Though Warhol produced different images by his process of screen printing— he devised a printing process of blotting outline drawings in ink from one surface to another—Viveek has used watercolours to create eight different paintings of Vidya Balan in a pose from The Dirty Picture in his show titled Reflections. To then get the Warhol effect, he used acrylic on canvas on those paintings.

The 44-year-old JJ School of Art graduate, who started out by making portraits and caricatures at five-star restaurants, even worked with the Mumbai Police for some time. “I used to sketch faces of murderers and robbers after people described them to me. The police recovered Rs 40 lakh worth of diamonds because of [one of] my sketches. But it was too scary—I used to accompany the police on their murder runs and I didn’t like it.”

This turned out to be a good decision. His last show was held in Germany at the Beck & Eggeling Gallery in Düsseldorf. “Someone who had bought a painting from me was trying to re-sell it online. The people from this gallery saw that painting and came down to Mumbai to ask me to hold an exhibition. It was a painting where I had portrayed what happens inside a ladies compartment of a local train in Mumbai,” he says.

Viveek is in a happy place right now. His muse, Vidya, came for the opening of his show and was fascinated by his paintings. “She couldn’t believe what she was seeing,” he smiles. He is now already working on his next exhibition, inspired by opera. “I watched a couple of operas in Germany, and though I couldn’t understand the language, I was so moved. My next show will reflect on the fact that life around me is like an opera.”