The Fraud of Vedic Maths

Those who seriously still think ancient India had devised a parallel mathematical system need to acquaint themselves with an inventive Shankaracharya called Bharti Krishna Tirthaji. 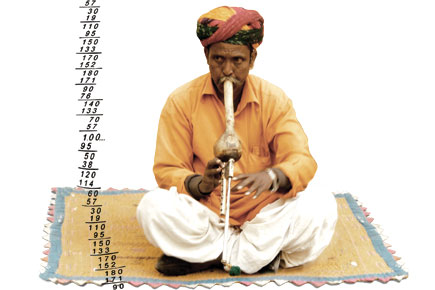 Those who seriously still think ancient India had devised a parallel mathematical system need to acquaint themselves with Bharti Krishna Tirthaji.


In 1965, a book titled Vedic Mathematics was published in English. Since then, the subject has become an industry that shows no sign of diminishing. In its latest manifestation, parents who know no better are shelling out serious money in the hope that their children will become scientific geniuses. They really shouldn’t bother. The subject amounts to nothing more than a few cheap parlour tricks, and there is nothing Vedic about it. But the story of how it came to be makes for a fantastical tale.

Bharti Krishna Tirthaji was born in 1884 with some talent for science and mathematics. But he eventually paid heed to a passion for Sanskrit and philosophy, and joined the Sringeri math in Mysore to study under its Shankaracharya. In 1925, he became a Shankaracharya himself. All through these years, he’d kept up his interest in science and mathematics. Many scholars before him had dismissed the Atharva Veda as arcane and difficult to understand, but Tirathji decided to spend time studying it in the belief that he could excavate the knowledge that he felt must lie there.

After eight years of ‘deep’ contemplation, he claimed to have found 16 sutras which explained all of mathematics. He, it is said, then wrote 16 volumes on Vedic mathematics, one on each sutra. Mysteriously, just before their publication, the manuscripts were lost. But in 1960, the last year of his life, Tirathji managed to rewrite one volume which was published in 1965 as Vedic Mathematics.

As stories go, this is not a bad one, but the evidence does nothing to support it. The 16 sutras expounded by Tirathji do not appear in any known edition of the Atharva Veda. Tirathji’s defenders have claimed that Tirathji was so immersed in Vedic thought that he was able to glean what the Vedic seers had in mind even if it was not explicitly so stated anywhere in the Vedic corpus. If one were to actually concede this meeting of minds between Tirathji and the ancient Vedic seers, it would have the unfortunate consequence of implying that not just Tirathji but even these seers were limited in their mathematical understanding.

All the sutras largely do is make the burden of addition and multiplication faster (though never nearly as fast as the cheapest pocket calculator), and even that, they do at a cost. Students studying the traditional method of multiplication should ideally understand (and bad teachers themselves fail to grasp this) what multiplication is, how it works, and how it is in essence an act of repeated addition. Tirathji’s methods are just rules that make mathematics seem like a bunch of tricks which are easy to implement but difficult to understand.

Take, for example, the multiplication of 9 and 7. Line them along with their difference from 10. That is:

You obtain the answer in the following fashion: the unit’s digit is the two differences multiplied together, –1 x –3 = 3 and the other digit 6 is just either of the diagonals added together, that is, 9–3 = 7–1 = 6. This method can be extended to much larger numbers. It is a neat trick, but it does not make multiplication easier to fathom, quite the contrary.

Let us then set Tirathji’s claims aside. The 16 sutras expound all of mathematics no more than astrology expounds all of modern astronomy. So what drove him and his followers (who brought out the book) to make a claim so extreme based on so little?

The answer lies in Tirathji’s times. The man was an early nationalist, and he worked with GK Gokhale in 1905 when the latter was president of the Indian National Congress. Among Gokhale’s initiatives was an effort to spread education among the Indian masses. Tirathji was caught between his devotion to the math and Gokhale’s vision. In 1908, he actually left the math to head a National College in Rajamahendri.

Three years later, he went back to the math, but the experience would have left Tirathji with little choice but to confront the message that Englishmen such as Macaulay had so forcefully fashioned, that the ancient history and knowledge of India were worth nothing when set against the most elementary aspects of Western thought.

To men like Tirathji, it was clear that if the secret of Western domination over India lay anywhere, it lay in the knowledge of the sciences, and mathematics stood at the heart this knowledge. What better answer to such hubris than to show that in fact all of mathematics had already been revealed in the Vedas?

The sutras, unfortunately, only reveal how little Tirathji knew of mathematics. Today, they only symbolise the strivings of a colonised mind searching for some self-respect, and we can find their equivalent in the Sangh Parivar’s absurd attempts to search for the technology of the jet engine in the udankhatola of The Ramayan. At least Tirathji’s quest was far more understandable and forgivable, given his times, but that we Indians should still take it seriously only shows the extent to which our creative imagination remains colonised. How much better off we would be if we could forgo the portentous name given to these tricks and learn to enjoy them as a Shankaracharya’s fancy.