The Dog of Small Things

In Ranjit Oberoi’s world, man and his best friend mime each other. And both come across as misfits. Is the artist any different? 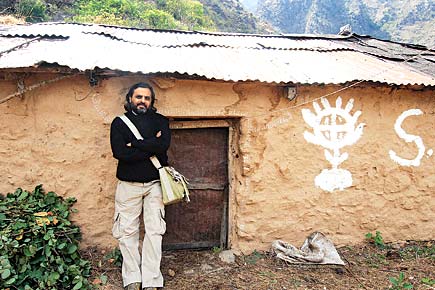 In Ranjit Oberoi’s world, man and his best friend mime each other. And both come across as misfits


At the basement gallery of Delhi’s India International Centre Annexe, Ranjit Oberoi is holding an exhibition of his photographs on street dogs. Maybe it is the afternoon heat, but the hall is deserted. It is so quiet you can hear ants walk.

Oberoi sits near the door, contemplating the table top on which is kept a register for visitor’s comments. “Not too many people coming,” he says in cautious English. “The heat, maybe.”

Or maybe the dogs. These are not feel-good dog portraits, not cuddly dogs that look like children. Which is a bit of a sin in a country where tigers are made to look like calendar beauties with long suffering souls. The cuteness is totally missing. So is the assured air of the pedigreed dog that takes its owner for a walk. Oberoi’s dogs don’t look like they speak in English either. Perhaps they may bark in Hindi on August 14. But that’s about it.

These are aimless dogs. Dogs that sit or stand, hang around men who sit or stand. Or sleep—next to men who sleep. Or just wait. Dogs that didn’t have much of a childhood. Dogs that don’t look like having a future either. These are dogs that don’t think highly of themselves. They are most likely drop-outs, misfits in given systems. Just like millions of ordinary Indians are. Just like, in two words, Ranjit Oberoi.

Oberoi passed his Bachelor’s in Hindi and then took a Masters in Buddhist studies. Neither of which is quite a sunrise subject in a country that worships money. Then, inexplicably, he switched to photography, from which he does not make enough to make a living. “My wife is employed,” he says, reaching for a flask of coffee brought from home. Oberoi’s wife is a teacher and that partly explains his freedom to be marginal. Your liberty is almost always someone else’s slavery.

Oberoi is 47 years old and lives with his father, sister, wife and son, who is in the 10th grade. “My son is sharp,” he says with subterfuge pride. “Very sharp. But he is not interested in studies.” And Oberoi is not the man to make him. Oberoi wears his hair long, wears his kurta long. He is an unpaid ad for the poor man’s FabIndia. His smile is without focus and is flavoured with a kind of tedium; the tedium of knowing the inescapable limitations of the rooted, dogged ordinariness of his talent. Besides, nothing much is going to happen and the non-happening, too, will take long to get over with.

“It is not dogs,” Oberoi says, “that I am shooting. It is street life. Normal Indian life.” He pauses. Oberoi is a slow talker. After a while, you too tend to talk slow. The pauses in our conversation get longer as if in an unspoken, mutual pact. The world perceptibly decelerates. “I am trying to capture just very normal Indian life.”

It would seem from the photographs on display that dogs are a very strong motif in the fabric of that life. To shoot the pictures, Oberoi has travelled to a lot of places in India. He clearly believes travel is a way of living. And he is modestly proud that he has been up and about a lot. His bio-data says, ‘Places in bold have been visited more than once.’ It is as if travel by itself is a kind of achievement, a Zen-like specialisation he has attained a certain proficiency in.

Isn’t it expensive to get around? “I travel second class. Stay third class,” he smiles. The smile is all Buddha. It means acceptance. A man who knows his place to be a corner stool in a hall full of thrones.

“You see that picture?” Oberoi says pointing to a dog sitting and staring at the sea. “That was shot in Chowpatti, Bombay. I took a train, reached Bomaby Central the next morning. I kept my bags at the locker there, and made my way to the beach, shot my pictures. Took a train back to Delhi the same evening.”
“What’s this exhibition doing to you?”

“It’s okay,” he says. “I was not too keen. The IIC asked and I said yes. They footed the bill for everything. And I have been written about.”

Though the portraits are not great studies in grunge or grit, they come across as snapshots of an India we tend to consider as not really relevant to our scheme of things. Yet, they say something, perhaps a muted statement of sympathy for a less demanding, less grabbing, less hierarchical culture. Less aware as well. Altogether another time, in fact.

There is, for instance, one photograph of a tiny waiting hall for women at a wayside railway station, occupied by a clutch of listless men who sit, sleep, or read a newspaper. In the foreground lies a dog—a bitch from the look of it—- sleeping. The irony of gender is perhaps accidental. But the activities they share—sleeping or waiting—blur the spiritual distinction between man and dog. Evolution grinds to a halt at the waiting hall: man and dog are reduced to the same level, united by the alarming purposelessness of existence. This is what you read into the picture. Oberoi himself is not willing to be overly articulate about his work. His camera just senses a philosophical similitude between man and his best friend.

Oberoi has just finished another project, a coffee-table book called India in Saffron. It is about the “presence of saffron shade in normal Indian life”. The text is by Francois Gautier. A lot of sadhus make appearances in the book. Oberoi does have a fascination for the mendicant way of life. “I might have become a sadhu. I tried to become one, but I can’t stand hunger. The pangs make me grow cold, give me headaches,” he says, unpacking a box of sandwiches. “What kind of sadhu is that?”

Does he have plans for the future?

“No. No plans. Best to take it as it comes.” He sits back. After a longish while, he reaches for the coffee again. “Want some coffee?”

“Sure, thanks,” I say. I sit back in the chair, too, watching coffee being poured into a white cup in front of me. It is quiet in the hall, where two men are going to drink coffee while the dogs look on. Just another moment. Perhaps that’s all there is to it. The future seems extravagant, unnecessary.