The layered aesthetics of conflict 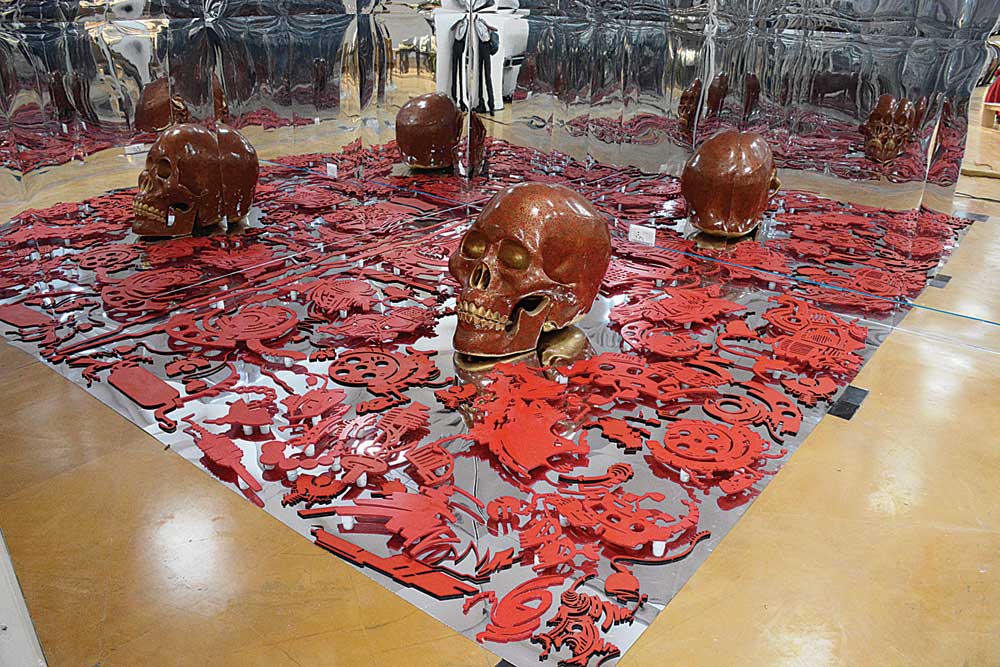 WHAT IF ONE wandered into a gallery space expecting to enjoy the beauty of art and instead, encountered works that are taut with turmoil, throbbing with dissent and designed to disturb the viewer? For many unsuspecting observers such was the experience recently when they walked into the Visual Arts Gallery at India Habitat Centre in Delhi, which featured the group exhibition, Silent Conflicts, curated by Ashna Singh. Eclectic art works ranging from installations, video works, digital collage, canvas and sculptures delved into the conceptual complexities of conflict.

Conflating the personal and political, conflict has been a recurring theme in art. Traditionally, representational art has documented scenes of war, vividly capturing battlegrounds and depicting carnage or conquest as outcomes of conflict. Contemporary art has shifted the focus to expressions and explorations of lived experience of conflict. “We usually associate the word ‘conflict’ with political and social turbulence,” says Singh, “but the darkest one is the war within.” She believes that the present age of consumerism has eroded our personal spaces, and conflict is an important part of the process of finding peace. “The conflict within could continue, but unlike other battles, the choice to end this conflict is ours,” she says emphatically.

For Veer Munshi, conflict has been the starting point for his artistic journey. Working with minority communities, his art practice has been around the Kashmir crisis. He believes that art is an extension of the self. It has been more than three decades since he was forced to leave the Valley in the wake of political strife, and that reality continues to drive his oeuvre. As one enters the enclosure where his site-specific installation titled Beyond the Personal is housed, one encounters a large skull at the centre. Spread over a 12×12-feet area bordered by mirrors, the work leaves no space for movement. Strewn across the floor are red papier-mâché objects—a medium that directly connects with the traditional craft of Kashmir, and the scene references the aftermath of a blast. The work evolved from his earlier series, Shrapnel, a response to the 2010 unrest in Kashmir. “To experience something is important to develop your artistic language,” believes Munshi. “Lived experience of conflict grows into your skin, you feel a loss of identity, roots, place and relationships.”

While the theme of conflict has resonated through his work, he is of the opinion that political upheavals are potent spaces for the synergy of art and activism. Art is a way of release, of processing inner turmoil, of organising individual experiences into collective voices to strengthen communities. In conflict-torn Srinagar, he organised an exhibition bringing together exiled artists and those still residing in the region. Recently at the Kochi Biennale, he worked with artists who have experienced or been affected by conflict in the Valley. For him the most crucial question remains, “In this age of polarised politics, how do we get communities together through art?”

FOR US-BASED PAKISTANI artist, Khalil Chishtee, displacement from his roots and absorption into a ‘minority community’ abroad came as a gut- wrenching realisation of how privilege works. Born in Lahore, the artist experienced a sudden outage of his identity as an upper-class male, when he transitioned to the stereotype of the ‘other’ in a new country in his late thirties. “At an intellectual level as an artist I had studied about issues of power, privilege and conflict, but only when you experience it, live it, can you truly understand your own privileges and what it means to be marginalised,” Chishtee says.


“My question as an artist is, how are we going to achieve balance between humans and environment? Just like the thin piece of bamboo, it is a narrow and unsettling situation” – Gigi Scaria

He defines ‘minority’ not in terms of numbers, but by the fact that they are not empowered in certain spaces or circumstances. “I find it intriguing that it is the majority that enforces constraints on other sections of society, and minorities accept these rules meted out to them. For instance, in a rigidly patriarchal society, women follow rules made by men about how they should live their lives.” His calligraphic metal work titled Definition transcribes words in Urdu that are titles given to women, for instance, ‘sister’, ‘mother’, ‘honour’. The medium of metal projects the human figure as a fence, encaging a woman within how society defines her, and not who she is as a person.

Self-reflexivity marks Chishtee’s visual language and inner evolution. He believes art can be a panacea for political and inner conflict. “When you make art, you spend time with yourself, thinking, investigating ideas, and at that moment you can truly see yourself as you really are. Art is the mirror where you can observe your own self and flaws and it is in that moment of awareness that you have the ability to transform the self.”

In her work Self, Shivani Aggarwal investigates how we are constantly building or breaking walls to understand our deepest truths, or to protect ourselves from it. An assemblage of broken bricks displayed on the wall, the art work is loaded with symbolism for the struggle between self and society. According to the artist, “All conflicts arise from our interactions with our surroundings. Our inability to understand, accept or interpret ourselves in our situations brings us in conflict whether it is personal, political or social.”

The theme of a tussle with the outer world is also explored by Gigi Scaria, from another tangent. He delves into the conflict between humankind and environment. His oeuvre has explored themes of urban expansion, displacement and migration. Placing this as a prime conflict in today’s world, he looks at how “expanding urban spaces are leading to the drying up of natural resources, accelerating environmental issues and climate change”. The bronze work Please, don’t touch…! explores the search for balance as an integral part of conflict. A man succumbing to the pressure of a mountain perched on a thin bamboo stick emerges as a symbolic visual expression of the dilemma of balance. “My question as an artist is, how are we going to achieve this balance? Just like the thin piece of bamboo, it is a narrow and unsettling situation. The balancing act is difficult to achieve in the present situation where we are hurtling towards crisis. Developing countries have high aspirations and the greatest challenge is to use natural resources judiciously.” Bronze is a medium that has captivated his imagination for the past few years. “It has longevity, just like certain issues that remain in our conscience as remnants of conflict.”

Scaria also talks about how the balancing act is a part of an artist’s life itself. “To pay close attention to what is happening around you, incorporating the times in your practice is challenging. The contemporary art world is a niche, elite circle, and I often find myself in a precarious position about how to articulate, connect with a wider audience and have conversations with history through a visual language.”

FOR POOJA IRANNA, art must conjure up conversations that are personal and universal at the same time. The most fascinating aspect of her visual vocabulary is the medium she chooses: staple pins. Her work addresses a critical aspect of conflict: reconciliation. “The material is sturdy yet fragile at the same time,” she explains. “We as people seem strong upfront, but we are fragile inside. Within ourselves, we are adjusting to conflict all the time.

“To experience something is important to develop your artistic language. Lived experience of conflict grows into your skin, you feel a loss of identity, roots, place and relationships” – Veer Munshi

Her sculptural work in staple pins, Reconciliation Attempts, imagines the possibilities for human creativity and resilience. With a static material, she creates dynamism that reveals, conceals, creates massive structures through a tiny entity. For her, art must have a twist in the tale, and one wonders whether reconciliation is an actual possibility.

Ranbir Kaleka believes that a resolution is ever elusive and that inner conflicts can never be entirely calmed down. His digital collage Turbulence, Veiled, Unveiled depicts the monotony of daily life as a man armed with a tiffin leaves for work or returns at dusk. Daily routine cuts him off from life around till he is confronted with himself, from outside. The projection on canvas depicts outer turbulence with a ship being tossed at sea, loud sounds of waves engulfing it and a moment of silence.

Embedded in metaphor, the video is looped to signify the cycle of conflict, where a resolution may be approaching, yet that moment never arrives. “There are no final resolutions,” says Kaleka. “Conflict shouldn’t kill you but should not be completely subdued either, otherwise it can be the death of thought.” For him, it is a question of choice in a world where contradictions can coexist. “Instead of attempting to overcome the conflict inside us, we should observe, recognise and acknowledge it. An understanding of our inner turmoil will enable us to be at ease with it and to tease out the complexities of life.”

From another perspective, Sonia Khurana’s work also centres on a constant state of inner conflict and the impossibility of convergence. One of her earliest works, dating back to 1998, the two-channel video installation titled I’m tied to my mother’s womb with a very long chord traces discontinuity where the body and the shadow never meet.

The dual-screen, silent video shows images from a hand-held camera carried along a shoreline. At the upper register, this appears as a shadow of a body, head and shoulders cast across muddy brown sand. On the screen below, the lower half of a body walking along various terrains is depicted. The incongruity between upper and lower sequences splits the body into disparate frames of time and location, where there is hope that they may meet, yet the possibility of reunion is entirely impossible.

Sudarshan Shetty reviews the possibility of approaching conflict in a light-hearted vein. The Combat Kit brings together harmless grooming objects replicated in wood recycled from chor bazaar. The artist plays with the idea of the redundancy of these everyday functional objects in the context of the art gallery.

With a variety of visual narratives, contemporary art absorbs the idea of conflict as an intrinsic aspect of the works, rather than images that are depictions of the theme. While some artists are driven by the lived experience of crisis, others introduce elements of contradiction into their art work to evoke irony, imbalance or hidden relations that offer different perspectives. At the heart of it, they attempt to make us reflect, inquire and share the human condition of living in a constant state of conflict.