The Discovery of Dubstep

Bangalore plays host to India’s first festival of this variation of electronic music, and surprisingly, as many as 2,000 people turn up 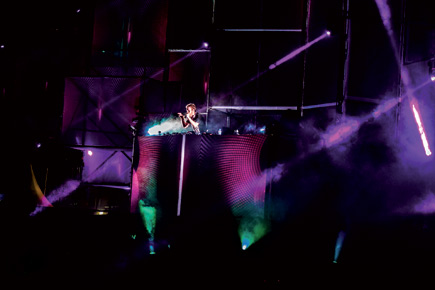 Bangalore plays host to India’s first festival of this variation of electronic music, and surprisingly, as many as 2,000 people turn up

British Dubstep biggie Nero is on stage. They are playing their huge hit—Crush—and the trio, comprising Daniel Stephens, Joe Ray and vocalist Alana Watson, stand on a stage called the ‘cloud’, which looks like it’s a floating creation of cloth squares stitched together, shooting out rays of light and smoke. The crowd sways in tandem. As a Dubstep virgin, when I watched a few Dubstep YouTube videos the night before, I couldn’t get the charm of this music. But standing in Bangalore on a cold night, surrounded by young things throwing their heads and bodies around, I found myself doing the same. The beat got me.

India might have hosted its first Dubstep festival in Bangalore last month (sponsored by Smirnoff), but this variant of electronic music has been around for a while. It emerged in London in the 90s; along with being rooted in forms of music such as drum and bass and reggae, it is said that Dubstep owes its birth to Jamaican party sounds prevalent at the time. It is difficult to describe the music; in the words of music website Allmusic, it is ‘tightly-coiled productions with overwhelming bass lines and reverberant drum patterns, clipped samples, and occasional vocals’.

British dubstep producer Rusko, who was headlining the festival in Bangalore along with Nero, says that Dubstep is the craziest form of electronic music. “The bass line is the most important part of Dubstep. It makes your whole body vibrate.” Other acts that performed were Mode 7, Sulk Station, Sandunes, Squid Works, Dualist Inquiry, the Bay Beat Collective and Vachan Chinnappa.

To my ears, it sounds like beats and bass lines being thrown like boomerangs, which then come back to you and reverberate like taut rubber bands. Sounds confusing? That’s what Dubstep does to you—it disorients you; you might lose your sense of place. Kay and Peele, an American sketch comedy TV show, once did a sketch on the two main characters acting like young kids trying to enjoy the new music sensation, Dubstep. The sketch ends with one of them throwing himself through the window, both their noses bleeding and their minds going crazy.

But the youngsters at the festival seem quite in sync with the music. The 2,000-plus crowd, all above the age of 21, as alcohol is being served, is a smart, chic and affluent one. They are dressed in ‘music festival’ clothing, which is tiny shorts with cool graphic tees and floaty dresses for the girls (channeling Kate Moss at Glastonbury), and faded denims and black tees for the boys. They are all drinking vodka and beer out of fluorescent mugs, beakers and cups. They all have fluorescent glow sticks, which they wave as they scream.

The music takes you to a different place, feels 26-year-old Farzana Ashraf Arakkal, who has flown down from Bombay for the festival. The information security consultant has been listening to Dubstep for five years now, and says what she likes best about the music is that it makes her forget everything. “I had gone to Bangalore to watch the Indian act Dualist Enquiry. I really enjoyed the show, the crowd was good. The stage was great, too, and that enhanced the whole experience.” Another Bombay resident, who has come down for the festival, Arun Vishwanath, says that he started listening to Dubstep a year ago, and likes it because it has a nice pace to it and is perfect to work out to. He also feels that the crowd at the festival isn’t pretentious at all, as they all seem to be genuine Dubstep lovers. “I went for the Avicii concert recently and it was full of people who were just pretending to like this music as it is deemed ‘cool’. All the people here seem like they really love the music. They are all [actual] fans.”

The stage, designed by the firm Vita Motus, is proving a big draw too. This particular stage set is the work of Heather Shaw and Alex Lazarus, who have designed sets for music festivals like Coachella, and shows like American Idol. This is the first time that 3D mapping has been done in India, and the result is a massive sound and light show that makes the music come alive. “We wanted to make a stage that was interesting during the day and at night. The cloud concept always works,” says Heather. Lighting director Alan Nathan adds: “It’s all about interpreting the music for the audience through lights and tricks.” The Vita Motus team is, in fact, taken aback to learn that India is listening to electronic music; that too, Dubstep. “We still thought that India only listens to Psy Trance, which Goa is famous for. But times have changed.”

Rusko, who brought the house down with his stage presence and music, is also surprised by the number of people who turned up for the event. “I started making Dubstep when it wasn’t even called Dubstep. I give it my own stamp by using real instruments, and not just making stuff on the computer. India really surprised me. It was mad!” He drops a bomb when he admits that he doesn’t respect electronic legends Daft Punk, whose latest album Random Access Memories has done phenomenally well. “In the Electronica genre, we write and produce and do everything. Daft Punk has a team to help them—and I don’t respect that,” he says, and then cheekily adds, “though the sound is pleasant enough.”

The defining visual of the festival for me has to be watching a bunch of friends standing in a circle and head-banging as Rusko delivers the beats. And even though he doesn’t regard them too highly, it is Daft Punk lyrics that come to mind–everyone is losing themselves to dance, as the song goes.