For forty years, Footsbarn has been travelling the world, performing. They live in homes-on-wheels as an itinerant little community. Now they’re pitching tent in India 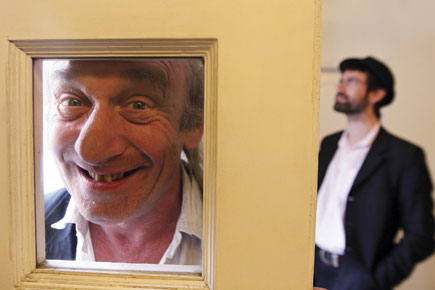 For forty years, Footsbarn has been travelling the world, performing. They live in homes-on-wheels as an itinerant little community. Now they’re pitching tent in India


Twenty-three, sundry costume designers, musicians, six horses, a cat, dog, chicken and a goat—that’s just your average Footsbarn team when on tour. Not to mention vans full of family members and livewire kids. There seem to be performances of sorts unfolding in every single caravan; some of them rehearsed and some entirely accidental. Drama lies at the core of the Footsbarn way of life, you could say.

It all began rather quietly though.  The most travelled theatre company in the world was first thought up in a Cornish barn in 1971 by two young dreamers—Oliver Foot and John Paul Cook. It was just wanderlust combined with a desire to make theatre more accessible to people across the world. And since then, they have come a long way.

A couple of years after its formation, the company left the UK to tour the world and never came back.  There was a period in the 80s when Footsbarn wasn’t taken seriously; its members were considered hippies because of their nomadic, itinerant style of living. Today, it is this very lifestyle that makes for the romance of Footsbarn. When its members are not traveling and putting up shows across the world, they live collectively in their homes-on-wheels in a small field in the picturesque Auvergne region of France.

It’s quite something to watch their interpretation of Shakespeare and Moliere through a heady mix of theatrics, traditional European performing arts, circus skills, street theatre, mime, shadow play and carnival. And now they are bringing all this and much more to India. Footsbarn’s love affair with the country began in 1995 when they conducted workshops with local artistes. Since then, the company has done four extensive national tours and two productions with artists from Kerala. And now they wish to pitch a tent in India so that they and the local artistes can tour the country.

“We are a company that travels with a tent and puts up shows in a tent. It is simply a mobile space that can go up anywhere there is land to pitch it on and people to play to. We don’t get into the theatre very often. Last time, we performed at the Lotus temple; it was beautiful but difficult,” says Paddy Hayter, Footsbarn’s artistic director.

The design and logistics of the India project are likely to be in place by 2012 and this tent can go on to become a platform for exchange, encounter, education and celebration. “As a company, we have conceived and constructed seven different theatre tents, and hence, would like to share this knowledge with people in India,” adds Hayter. This could become a perfect home for nomadic theatre. Simply equipped with lighting and seating, it could give freedom to Indian companies and create a touring festival venue open to all.

However, Footsbarn has a warning for people who think there is nothing more exciting than the life of a travelling player. It can get physically and mentally tough, they admit. A travelling company requires more than just good histrionics; it requires a certain kind of person—who can be tough and malleable at the same time. “When we are travelling, we can be parked in a beautiful garden overlooking a river or a car parking lot, it could be anything really. Sometimes, we need to walk for kilometres down unmotorable roads for basic resources. There have been times when we have faced scarcity of water and electricity,” says Granier Fabien, who joined the company four years ago. “Our life’s pretty basic, but then there are people around the world who go through far tougher things.”

What cheers them is the fact that their family members are always around to share the good stuff and tough times with them. Unlike regular theatre, where an actor comes in for rehearsals and goes back, Footsbarn believes in the circus style of collective living. “At the time of our formation, we were very sure about the fact that we will not leave our families behind,” says Hayter. Being part of a travelling group doesn’t mean that the kids are going to be let off from their studies. If they can’t go to school, the school comes to them. “We have a bus that doubles up as a class with a library and study materials. Our own teachers travel with us. No getting away from books,” grins Fabien.

A nomadic lifestyle has various dimensions to it. For groups of people to stay together, often compromise is required in the most positive sense. The off-stage camaraderie often helps in the act of creating theatre as well. “It definitely helps theatre that we feel for each other. When you live as closely as we do, you really can’t thrive on conflict,” says Hayter.

It has been 40 years since Footsbarn was first conceived. As the group has grown in stature, newer talent has come in; some of the original members have left.  In fact, Hayter and another actor are the only ones left of the original group. “When Footsbarn was formed, all ideas were happening at
the same time. We were all going through the same things in life. We were all having children,” he laughs. So, in a sense, he has now become the keeper of Footsbarn’s history. “There is no defined hierarchy in the company. I am artistic director only because I can take newer people through the whole story. I have been here for 38 years; my wife Freddie has been around for 30 years. So now, we have become the people who speak for the group,” says Hayter.

He has now confined himself to simply being a guiding force and person who brings about cohesion.When it comes to rehearsals, he lets the group’s energy take the performance forward. “I will never tell anyone ‘This is how you place your hand’ or ‘This is the expression that you should have’.

Our individuality is our strength.

We are an actor’s company and not a director’s,” explains Hayter. Unlike other theatre companies, Footsbarn doesn’t even mention the director’s name on its posters. “We don’t say such-and-such director’s Hamlet. If it is Hamlet or Macbeth, it belongs to Shakespeare or to the world,” adds Hayter.

Each person in Footsbarn is known for his or her unique strengths that don’t just add to the performance, but to the day-to-day living as well. “It is such an organic process. Each member is such a treasure. Our violinist from Poland has been with us for 20 years; she somehow just always manages to assemble the best musicians. We have a lady from Japan who has guided us in puppetry and an Indonesian actor who taught us mask-making at one point,” elaborates Fabien. It is not easy to define how Footsbarn works. People just pool in their creative energies and things magically fall into place.

The company members choose classics by Shakespeare or Victor Hugo because of the sheer timelessness of these literary works. They believe that a really good piece should not be bound by geographical boundaries or historical time periods. It should appeal to humanity as a whole. “That’s why we perform in a tent. It allows people to make connections that they otherwise can’t in a cold theatre environment. We realise that the world’s got terrible problems and we want our performances to give people hope. Something to dream about. If our piece achieves that, then it is mission accomplished,” says Hayter.