Relive Shakespeare’s life, times and inspirations with this show 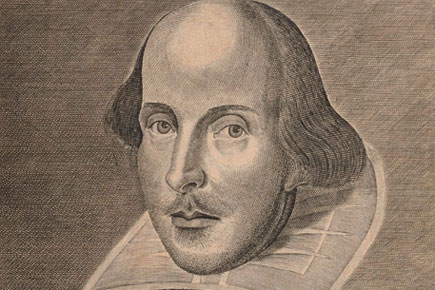 Relive Shakespeare’s life, times and inspirations with this show


It begins and finishes with the word. Two texts bookend this exhibition—the first is a copy of First Folio, edited after Shakespeare’s death by his colleagues Heminge and Condell and published in 1623. In a stroke, they transformed the playwright from a conjuror of the spoken word, reiterated on stage, to a writer whose verse is pressed between parchment, whose plays are sturdily divided into ‘history, tragedy and comedy’ categories, which still hold almost four centuries later. The second, and the last exhibit you see on your way out, is the so-called Robben Island Bible. This copy of Shakespeare’s works, printed in 1970, belonged to ANC leader Sonny Venkatrathnam while he was in prison. The book’s cover was disguised with images torn from a Hindu calendar, so the guards thought it was a prayer book, before it was smuggled into the prison. Venkatrathnam circulated it among his fellow inmates, asking them to select and sign their favourite passages. This text, the inmates said, gave them a deeper understanding of human courage and sacrifice, it reassured them that they were part of a ‘universal drama’. For us, it shows how Shakespeare’s voice found its way to the farthest, far-flung corners of the world and into the deepest, most intimate recesses of the human mind.

In the wide spaces between these two books, the curators—Jonathan Bate and Dora Thornton—behave as the set directors of a playhouse in Elizabethan England. Rather than taking the more stereotypical approach—of showcasing costumes, theatrical paraphernalia, props, movie stills—they recreate for us the world that Shakespeare inhabited. Earlier this year, The National Gallery, London, orchestrated Leonardo da Vinci: Painter at the Court of Milan, an exhibition highlighting the various diverse influences that went into several of his major paintings. The exhibits of Shakespeare: Staging the World function in a similar manner. The first section is dedicated to Shakespeare’s London, arguably one of the world’s most important cities of the time—and they conjure the physical landscape of the place as well as the social and economic intricacies of life on the streets, pinning them to selected sections from his plays. For example, an Elizabethan dagger and rapier dredged up from the Thames reminds us that these instruments were commonly carried around, and on the raucous South Bank side of the city, were often brandished, drunkenly, outside pubs and inns. In this sense, Romeo and Juliet could be seen as a modern-day tale about the all too present problem of knife crime.

On the other side of the room hangs a glossy portrait of Abd el-Ouahed ben Messaoud ben Mohammed Anoun, Moroccan Ambassador to Queen Elizabeth I, the head of a delegation of soldiers from Barbary who came to London in 1600. The presence of these ‘strangers’ had an enormous impact on the people of the city, who viewed them with a mixture of fascination and fear—they would certainly have been known to Shakespeare and may have informed the character of Othello, the soldier and ‘noble moor’.

The section also focuses on the importance of the Elizabethan playhouse not only as a cultural and social hub—with a fork, promise ring and bear skull, that were found there—but also as a window to the world beyond London and Britain. The theatrical stage is a transformative space, one that Shakespeare manipulated, so geographies and time periods were changed in a line.

In Henry V, for instance, he plucks at the very heart of dramatic suspension of disbelief—‘Can this cockpit hold/The vasty fields of France? or may we cram/Within this wooden O the very casques/That did affright the air at Agincourt?’

The Globe and The Rose transported their viewers to different lands and also served as metaphorical time machines. The remaining sections of Staging the World elaborate these themes: the magical forest of Arden, in the playwright’s home county of Warwickshire, where the tussle between the court and country life, artifice and nature are played out; Venice, which served as a magical ‘other’ to London with its beautiful women, multicultural society and large Jewish ghetto; and Prospero’s island from The Tempest, a no place and every place that heralded a ‘brave new world’.

While Shakespeare might have never left England’s shores, his imagination roamed far and wide, joyously summoning up its creations for the stage. With his history plays, the playhouse also functioned as a mirror, holding up for its audience a reflection of their political insecurities and frail identities, throwing up questions about kingship and royalty, which were as pertinent in the 1600s as they were in Medieval England: Was kingship a divine right? Could a king be dispossessed of his crown? Who would be heir to a virgin queen? The exhibits here range from a magisterial medieval portrait of Richard III (that conflicts sharply with the Bard’s portrayal of him in his play), the Funeral Achievements of Henry V, which were on display at Westminster Abbey in Shakespeare’s time and which he describes as ‘his bruisèd helmet and his bended sword’ and even a grisly reliquary containing the right eye of Edward Oldcorne, a Jesuit priest who was executed because of his (disputed) connection to the Gunpowder Plot of 1605. A year later Shakespeare wrote Macbeth, which in turn can be read as a dire warning against regicide.

The exhibits range from the magnificent (an Ides of March coin sanctioned by Brutus to mark Caesar’s death in 44 BC) to the lowly (an Elizabethan spade of the kind Shakespeare, a keen gardener, may have used  in his home).

The artefacts serve to fill in marvellous detail. Othello, before killing himself, refers to a ‘sword of Spain’ he keeps in his chamber. If you ever wondered what it looked like, well here it is: a glinting rapier with a long Toledo blade and an intricately carved French hilt. Caliban in The Tempest tells Stephano he will teach him ‘how to snare the nimble marmoset’. Marmosets were primates brought back from the New World to Europe as pets for princes. What on earth did they look like? Here is a drawing of one.

Amid all this imagery, however, are the words. Thornton and Bate thankfully haven’t forgotten how powerful and lyrical Shakespeare’s language can be. Interspersed with the displays are recorded video vignettes of some of his character’s most famous speeches performed by actors from The Royal Shakespeare Company. Spellbound, you can watch Antony Sher play Shylock’s ‘Hath not a Jew eyes’, Paterson Joseph call forth ‘Romans, countrymen and lovers’ and Dame Harriet Walter perform a moving, elegiac end as Cleopatra: ‘The stroke of death is as a lover’s pinch/Which hurts, and is desired.’

The exhibition space becomes our window to the past, peopled with characters and objects that still live on in our contemporary imaginations.

Ben Jonson, Shakespeare’s fellow playwright, friend and sometimes rival, said, “He was not of an age but for all time.” It is a claim that is hard to dispute. As you leave, you see the Robben Island Bible with Nelson Mandela’s signature beside the lines from Julius Caesar, spoken by the Roman emperor on the morning before his murder: ‘Cowards die many times before their deaths; The valiant never taste of death but once.’ And you know Jonson was right.

Shakespeare: Staging the World is on at the British Museum, London, till 25 November 2012