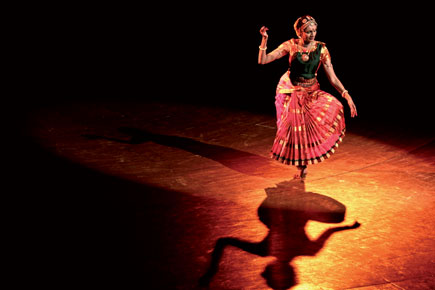 Every morning, under the old, thick and comforting branches of the famous banyan tree on the serene, sprawling campus of the Chennai-based Kalakshetra Foundation, students of the Rukmini Devi College of Fine Arts, the faculty, and the director of the Foundation congregate at 8.30 for a prayer that is, true to the Theosophical Society, multi-faith in nature. This act of coming together in harmony that lasts not more than 20 minutes is a Kalakshetra ritual, both sacrosanct and spiritual. “For me,” says its director, Priyadarsini Govind, “that moment, when all of us, students, staff, sit together and soak in song and prayer, is like an unspoken communion. It’s a time for gathering our thoughts, both individually and collectively, and is, in a sense, a reinforcement of our own faith in the ideals of the institution that we all belong to, and in the arts at large.” When the prayer ends, Priyadarsini’s day begins. “And no two days are alike,” she says. We meet her early morning on a Saturday; the college is off for the weekend but Priyadarsini has a full schedule.

Life has been this way since August 2013, when she was appointed director of the prestigious Kalakshetra Foundation. Her sister, Vidya Prasad, a senior lawyer in the US, recalls the story leading up to the appointment. She called Priyadarsini late one night in June that year, telling her that Kalakshetra was inviting applications for the post of director, following Leela Samson’s controversial exit. ‘I felt that given Priyadarsini’s world vision, her experience as a choreographer, dancer and teacher, she would be perfect for the job that requires not just an administrator but someone with unfettered artistic vision.’ Priyadarsini’s first reaction, Vidya writes to us in an email, was, ‘incredulousness’; ‘She believed that she would create way too many enemies if she even so much as applied for this. I didn’t see how that could happen having lived away from India for so long. She was right about the enemies. And I was right that she would delve into every aspect of her new avatar to try and understand the nuances of this job.’

The Kalakshetra Foundation, founded in 1936 by the legendary Rukmini Devi Arundale, is counted among India’s premier institutions for the promotion of classical dance and music. Its directors, up until 2013, had been either its students or its teachers. Priyadarsini was neither. In her own way, she was creating history, becoming the first-ever non-Kalakshetra alumnus to become its director. “I was shocked,” says Anita Ratnam, Chennai-based dancer/choreographer and editor of a globally acclaimed dance portal, Narthaki.com, recalling the announcement. “With no administrative experience, absolutely no connection with the history or philosophy of Kalakshetra and little knowledge of the winding lanes of Indian bureaucracy, I considered her directorship a slap in the face of the many more qualified people who had submitted their applications for the post. However, history has taught us never to underestimate the underlings. Two years after her tumultuous appointment and after 18 months of deft manoeuvring and steely determination, Priyadarsini is still at the helm of my alma mater…”

Sipping watermelon juice—“No sugar, no ice, please”—and dressed in a Kanchipuram cotton sari with a contrasting ikat blouse, Priyadarsini says, “Life has literally swept me by since,” leaving little time, energy, or mind space for anything other than work at the Kalakshetra. “I’m not complaining, though,” she says quickly, “The opportunity to do something genuinely meaningful for the arts, is something that I’ve always been looking for in my life. For instance, I’ve always wanted to create a state-of-the-arts theatre in the country. Now, I’m responsible for an educational institution like the Kalakshetra with the possibility of shaping and honing young minds… It couldn’t get better than that! Every day has taught me something.”

Much like the ritual of morning prayer at the Kalakshetra, Priyadarsini is a creature of habit and yet she is a creative soul who combines the many qualities that are a hallmark of a true artiste—as a dancer, she is a seeker, an explorer, an experimenter. Counted among the foremost exponents in the world of Bharatanatyam today, Priyadarsini combines legacy, expertise and experience. A protégé of two exponents of the dance form, Kalaimamani, SK Rajarathnam Pillai and Padma Bhushan Kalanidhi Narayanan, Priyadarsini is recognised as the flag-bearer of Kalanidhi’s Padam repertoire. ‘Strong-spirited is her style,’ writes Brian Seibert, dance critic of The New York Times, accurately referring to abhinaya or the art of expression as her greatest asset in dance: ‘She has a face of uncommon plasticity.’

Her performance career, spanning nearly 34 years, has allowed her to travel the world with her art form. In 2000, Priyadarsini began her solo tours, abroad and would perform—in a span of six weeks—nearly 20 programmes across institutions and organisations of the arts. ‘Her best tour,’ says Vidya Prasad, who also works as her agent in the US, ‘has always been the latest that I see.’ Her last tour was in 2013.

Performance has taken a back seat in her life, but by her own admission, Priyadarsini finds the road she is travelling now immensely gratifying and fulfilling. It hasn’t been easy, though. And you can see it on her face; there are traces of wrinkles, stress lines on her forehead, a few strands of grey, and the glasses that she wears lend her not only a serious academic look but are also telling of the life she leads—as an administrator with the future of an arts organisation resting on her shoulders.

“The thing with the Kalakshetra is,” she explains, “that every person who has been a part of it has a personal relationship with it. As its director, I’m dealing with people for whom Kalakshetra is their home; I’m dealing with human emotions. The challenge therefore is to constantly try to understand and navigate around the idea of what as an individual you’d like for it, and what, as an institution, its role must be for the arts as a whole. The challenge is to understand that rules are not everything but rules do matter. It’s a lot of balancing that one has to do.” In life, Priyadarsini has always been striving for a balance. As a daughter, wife, mother, sister, she has proficiently managed a starry, full-fledged and frenetic performance career that has earned her fans and recognition across the globe. “Living the life of a dancer teaches you the art of patience,” she says of a quality integral to her role as an arts administrator. “Plus, as a dancer, you have to construct your own paths. As a woman, and a mother, I’ve had to deal with many life experiences and be there for my children, and give them my best, no matter what. But if you ask me how I have managed it all, I’d say that somehow, whatever life’s circumstances have been, I’ve never let anything affect what I do, either as a dancer or as Kalakshetra’s director. I believe in giving things my all… I don’t like making excuses.”

Last April, just three working days after her husband suddenly passed away, Priyadarsini returned to office. She was grieving deep down, but she didn’t allow loss to swallow her or come in the way of work and its priorities. “Life, after all, has to go on.”

Dance has been Priyadarsini’s anchor in life. On stage, or while at practice, she immerses herself in its expansiveness, letting herself go, allowing herself be embraced by its make-believe, magical world filled with stories, emotions, and the possibilities of expression. Dance was, and will always be, her “utter centeredness”, says VR Devika, an arts activist based in Chennai, who helms the Aseema Trust. “There is a child-like adherence to the idea of practice and there is a child-like delight in her dancing.” TM Krishna, a classical musician based in Chennai, says Priyadarsini is a “rare human being and artiste; she is someone who is willing to place herself in spaces that can open oneself to introspection and questioning, allowing herself to explore.” In the context of the Kalakshetra, she has embarked on a process of revival. The Kalakshetra Journal, which was originally conceptualised by Rukmini Devi as a forum for cross-disciplinary discussion on the arts, was revived and launched during the Remembering Rukmini Devi festival of 2014. Last September, Kalakshetra hosted its very first four- day festival titled ‘Niram Thiram’ dedicated to textiles and associated crafts on the premises of its Crafts Education and Research Centre. Outreach was introduced as a distinct activity last academic year and workshops were delivered by Kalakshetra at venues around the world like Portugal and the US. Two phases of the Oral History documentation of the Kalakshetra were completed between July and September last year.

For the next academic year, plans are afoot to rejuvenate and brand Kalakshetra’s own range of products. The Koothambalam, the main theatre space at the institute, she hopes, will be resurrected next year. “There is a desire among the teachers to realise their own potential and I hope to be able to facilitate that by providing avenues in research, workshops, lecture-demonstrations, performances, et al. I also intend to spend more time with the students and mentor them,” she says, “I really enjoy working with youngsters.” One of her oldest students is 25-year-old Shweta Prachande from Pune, who moved to Chennai when she was 15 to learn dance from Priyadarsini. “As a teacher and a guru, she is one-of-a-kind,” Shweta says, “She opens out a world in dance for me that is always challenging and innovative. She teaches dance as a way-of-life.”

Haripadman, a senior faculty member at the Kalakshetra and an alumnus who has been with the institution for the last 22 years, acknowledges that Priya Akka, as he fondly refers to her, belongs to another school of dance: “She is conscious of that and is very mature to allow us continue to create work in the Kalakshetra style without ever interfering; she is a great spectator, a sensitive judge and offers constructive feedback. She interacts with us as a dancer; after all, the dance is greater than the style, illeh (no)?”