×
ART: INSIDE THE STUDIO

The Art of Pursuit at Close Quarters 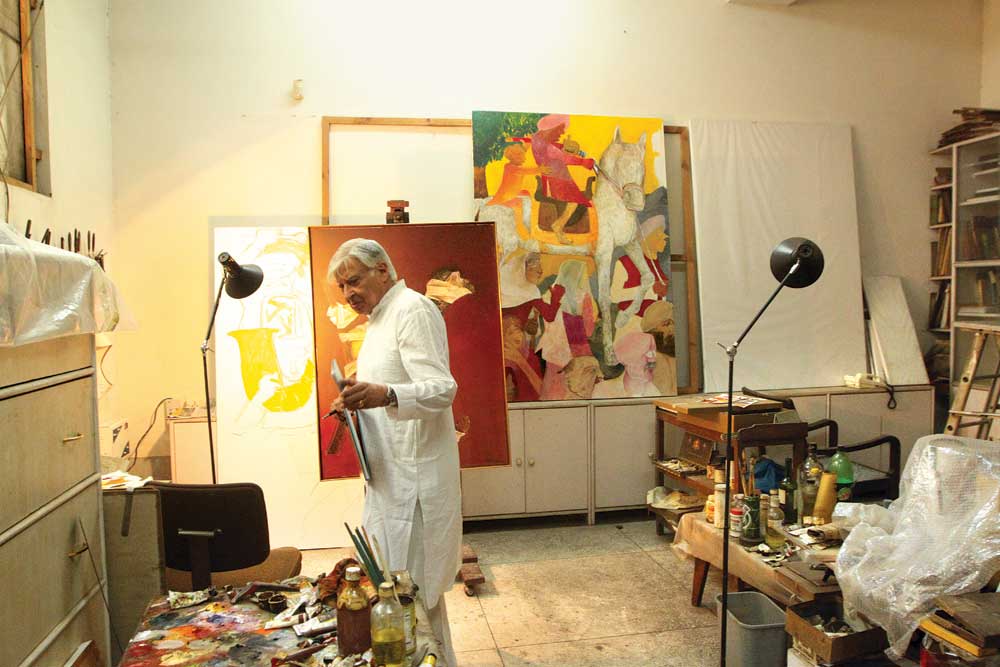 IT WAS PAST 11 pm. For a change, I wasn’t among the last few to leave. The who’s who of the South Asian and international art world were all in attendance at the opening reception for the third edition of the Dhaka Art Summit held earlier this year, hosted by Nadia and Rajeeb Samdani. The roof party at Le Meridien was in full swing, but I was exhausted. I headed towards the elevator, and as I waited, chatted with artists Jitish and Reena Kallat, among others. Just then, superstar curator Hans Ulrich Obrist made his way towards us. He, too, I suppose, wanted to catch the bus back to the hotel before it was too late. He seemed affable, and of course he was well acquainted with all members of the highly accomplished assembly I had attached myself to, which perhaps explains why he made the effort to introduce himself to me. I told him shyly that I obviously knew who he was.

“In fact,” I added, “I’m actually reading your book, Ways of Curating. Is there any chance you could sign my copy tomorrow?”

He said it’d be a pleasure.

I carried the book with me the next day. Given that I was participating in the four-day long inaugural Critical Writing Ensemble, I couldn’t make it to Obrist’s much-anticipated conversation with photographer Dayanita Singh. But I happened to be in the food court when he emerged from the Shilpakala Academy, two video interviewers in tow. By then, however, I had managed to spill water over my copy of his book which already looked dog-eared and weather-beaten, because that is honestly how I prefer to handle the books I own, not as precious objects or talismans but as things to be possessed and claimed through the contaminating weight of finger prints and ink.

I went up to Obrist. I was surprised that he recognised me. For the sake of formality I reminded him of his promise to sign my copy of Ways of Curating and apologised for its condition.

I don’t remember his reply verbatim, but he graciously inscribed its essence across the two lead pages of my copy; it was an anecdote about a term the late French artist, writer and translator Pierre Klossowski had once used in a conversation with him; ‘ad usum’, a Latin phrase that loosely translates to ‘for one’s own use’.

Obrist was agreeing with my claim that the book as a physical object in one’s possession needn’t be treated reverentially. In the hands of its owner, it was principally meant to be ‘used’.

I’m always beside myself with excitement when Julien Segard invites me over for dinner. The French artist, an alumnus of the prestigious École des Beaux-Arts, adopted Delhi as his base a few years ago. In his early thirties, Segard, who is represented by Kolkata-based gallery, Experimenter, is one of my favourite practicing contemporary artists. I’ve had the pleasure of knowing him since he first came to India and lived with his then partner in GK 1, and have had the honour of being among the early art writers to contextualise his work.

Influenced by the Arte Povera movement, Segard’s art embraces the use of found objects and so his workspace often resembles that of a carpenter who also dabbles in mechanics. Although his work always threatened to encroach his living space, little less than a year ago, he more formally eclipsed the line between the two by occupying a bare, largish one-room apartment on the first floor of a building in Shahpur Jat, near Panchsheel Enclave in south Delhi.

The first time I visited this studio was a few weeks before his debut show, ‘Anywhere But Here’ at Experimenter in August last year. As we moved from corner to corner, Segard opened out customised steel trunks from which he’d extract his paintings and watercolour sketches usually executed on found paper, like old receipts, to spread over sheets he’d had lain out on the floor. He had a cat and its runt for company and his walls were lined with bold new works done on either cloth or recovered wooden boards with one long table over which stood miniature versions of sculptures in progress. While his studio showed every sign of him having inhabited it, the absence of either bed or mattress proved he wasn’t living in it.

A few months ago when I visited, the studio seemed transformed. In one corner was his bed. On the extreme end, towards the balcony, was a round table over which he had draped delicate white linen. It was evening. I had arrived with my partner. Segard lit candles and offered us red wine and what followed, after his third guest had arrived, was a phenomenal three-course meal perfectly cooked and artfully plated.

Segard made no attempt to conceal the naked clutter of his studio. It struck me then how the clustered environment characteristic of the urban village of Shahpur Jat seamlessly synthesised with his artistic sensibility. The aesthetics were impeccably matched. Segard’s work, which had always celebrated and personified the jugaaduness of contemporary Indian culture, was now deeply entrenched in its machinations.

“As time passes I feel like the space is more and more in harmony with the work I am producing,” he said to me recently. “I really enjoy to sleep, dream, cook and draw in the same space.”

Segard, it appeared, had perfectly embodied Klossowski’s diktat; he was truly ‘using’ his studio as his own.

When he was 16, Obrist first saw an exhibition of work by Peter Fischli and David Weiss at the Kunsthalle Basel sometime in 1985. It struck him deeply. He soon came upon a copy of a book the duo had produced, titled Suddenly This Overview, which, according to him, “showed an impulse to explore, map and collect human scenarios, with a combination of great scope and miniature scale”. Obrist, in his first essay in Ways of Curating , admits to looking at this book daily. Months later he says he “found the courage” to ring the artists up at their studio in Zurich to propose a visit. They said he was very welcome.

They happened to be working then on what is now considered one of their most pioneering and iconic projects, The Way Things Go, an addictive film where a series of regular, familiar objects are made to experience the relationship between cause and effect even as a chain reaction ensues that binds them to a sequence, thus building an animated narrative. Obrist recalls that first studio visit as his “eureka moment”. ‘I was born in the studio of Fischli and Weiss: that is where I decided I wanted to curate exhibitions, though I had been looking at artworks, collections and exhibitions for most of my adolescence,’ he writes in Ways of Curating. ‘Fischli and Weiss, masters of questioning, were also the first to ask me what else I had seen, and what I thought of what I had seen, and so I began to develop a critical consciousness, a drive to explain and justify my reactions to art—to enter into a dialogue… Through their work, Fischli and Weiss expanded my definition of art—and this is perhaps the best definition of art: that which expands the definition. Their friendship and the interest they took in me began a kind of chain reaction that has never stopped.’

ARTIST MANISHA GERA BASWANI, WHO EMBARKED ON A PROJECT TO PHOTOGRAPH FELLOW ARTISTS, BELIEVES THAT THE IDEA OF A STUDIO IS THAT IT IS A SPIRITUAL SPACE

Unlike Obrist, I was not metaphorically born in an artist’s studio. It was almost exactly seven years ago in the heat of Delhi’s summer that the art writer in me took seed. A series of encounters with the photographer Pablo Bartholomew, whose 2008 exhibition ‘Outside In’ captivated me, led me to his father, Richard. When Pablo asked if I knew of an editor who could help him put together and publish his late father’s art criticism, I eagerly volunteered. Over two months, I proofed over 300,000 of his words that had been optically scanned from old newspaper clippings and were thus ridden with typos. The writing was marvellous. Given my lack of an education in art history, Richard’s reviews and artist profiles read as a record of the birth of the Modernist moment in post-Independent India. There was an enticing flow to his missive, his language was accessible, yet rife with insight. Here was a man who, like me, cut his intellectual teeth on English literature, and who taught himself to see. His criticism relied not on mere academic impulse but intuition, an instinct that he evolved through his friendships with artists, and consequentially, his frequent visits to their modest studios where he often photographed them at work. ‘The critic who wishes to be articulate must be prepared to discuss reviews with artists; he must be at home in the artist’s studio and he must be an integral part of the art movement,’ he wrote in ‘Criticism in India’, an essay published in Cultural Forum in 1959 that can be accessed in the publication, The Art Critic: Richard Bartholomew, the culmination of my role as associate editor.

Unlike Obrist, I never really had ‘the courage’ to invite myself over to artists’ studios. But as I wrote more regularly, the invitations gradually seemed to extend themselves. It isn’t that the studio is a temple or a form of hallowed ground. It is that it is a private space where the artist is at her naked best. There isn’t the confidence offered by the white-cube gallery; a transitory space for the viewing of work in the hope that it attracts a buyer. Instead, there is vulnerability, insecurity and self-doubt, alongside silence and solitude. The imagination is not as throttled by the anxiety of expectation. This is where art is imbued with its soul.

Artist Manisha Gera Baswani, who 15 years ago embarked on a project to photograph her fellow artists in their place of work, believes that the whole idea of a studio is that it is a spiritual space where artists let go of their shields. ‘It is a temple abode of a creative individual,’ she says over an email.

Inspired by Gera Baswani’s zealous pursuit, and perhaps as a tribute to Richard Bartholomew, this column will, through monthly installments over a year-long span, record my visits to the studios of 12 of India’s most exhilarating, mid-career and established artists, by engendering the point of view of an active observer and self-taught art writer whose primary interest is in both demystifying the artistic process and simultaneously extolling its virtuosity while delighting in the privilege of such intimate access.

(This is Rosalyn D’Mello’s first of a monthly column)