Hussain Dalal is Bollywood’s most sought after dialogue writer. But that is not his only job 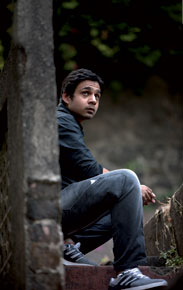 Hussain Dalal is Bollywood’s most sought after dialogue writer. But that is not his only job

When you’re all of 25, juggling just one job is hard enough. Hussain Dalal has two. One he believes is his true calling, and the other came to him by accident, but was too tempting to pass up. By all accounts, the young man is doing a commendable job of balancing both. Dalal’s occupation of choice has always been acting. He’s been doing theatre in Mumbai since the age of 16 and has performed small but significant parts in indie films. If you jog your memory, you might place him from some videos by comic group All India Bakchod—in one he makes a convincing Arvind Kejriwal lookalike. But the role that has stuck in public memory is the recent Nescafé commercial which went viral. In the ad he plays Rishi, a stand-up comic with a speech defect who has to keep his audience from tuning out as he stammers through a joke. The best thing about this underdog story is Dalal’s sensitive and believable portrayal of a person who stutters. It makes you forget that he’s actually trying to sell you coffee.

“I’ve never taken narrations for a hero’s role in a film. After that ad, I’ve had five. I’ve been getting mad feedback,” says Dalal. To land this part, he had to appear for an audition where he was picked from a bunch of hopefuls. However, for his other job, the one that came to him by accident, he’s way past the stage of auditions. In fact, it’s raining offers. Dalal is the dialogue writer of blockbuster Dharma films like Yeh Jawaani Hai Deewani (YJHD) and 2 States. His latest is Raj Nidimoru and Krishna DK’s Happy Ending, which attempted to parody the sort of clichéd romcoms he excels in writing.

Up next, Dalal is writing dialogues for a bunch of big-ticket films—Homi Adajania’s adaptation of The Fault in Our Stars, Raj and DK’s Farzi and Sajid Khan and Rohit Dhawan’s next. “I sleep for 5 hours a day. I’m constantly stressed because the collective budget of these films is more than I can count in a lifetime,” he says. Sitting at a coffee shop in suburban Mumbai, he appears no different from the carefree youngsters sipping coffee and shakes at other tables. He points out that he doesn’t wear the serious expression teamed with a cotton kurta-look that is typically expected of writers.

As for his latest release, Happy Ending, Dalal seems particularly chuffed about writing Govinda’s brief five-scene part in the film. These are also the most enjoyable moments in an otherwise tepid film. “It was a dream. Who doesn’t want to write funny monologues for Govinda and watch him make them way better than what you wrote?” he says with awe. “I’m just another boy off the street. So yes, it is intimidating when you’re sitting in the same room as a star you’ve watched all your life. But at the same time, fortunately, you go home and you’re not obligated to live a filmy life. Ayan [Mukerji, director of Yeh Jawaani Hai Deewani] once told me, ‘Don’t ever lose your irreverence.’ I didn’t know what it meant at the time. I had to google it,” he says with a laugh.

Akarsh Khurana, film writer and producer of theatre group Akvarious Productions, first met Dalal when he was 17. He auditioned him for a part in his play Afsaneh: Bai Se Bioscope Tak for which he needed Urdu-speaking actors. His performance made him the youngest ever nominee for a Mahindra Excellence in Theatre Award. After that, Dalal has been a part of every play of Akvarious Productions. “There came a time when he was running my theatre company. At the same time he was also assisting on some other film. So he’s always been a very hardworking and enthusiastic boy who’s worn many hats,” says Khurana.

This enthusiasm didn’t extend to education. Given his abysmal attendance, Dalal didn’t last long in his advertising course at Rizvi College, Bandra. This doesn’t upset him. He believes earning a living from an early age sharpened his survival instincts and taught him lessons he’d never get in a classroom. Nidimoru adds that these life choices have made him a solid writer. “Hussain is an interesting guy. He’s really young and has already seen a lot in life. I always feel that deep inside he has a lot of pathos. He’s been writing for young characters so far, but he’s an old soul,” says Nidimoru. At 21, Dalal had already signed his first film. He was a person of authority on a film set, Ranbir Kapoor was voicing his lines on screen and most importantly, the money was rolling in. “I came from theatre. So anything over Rs 500 was a lot of money and much more than I could carry in my pocket at 21,” he says. When it comes to discussing monies with producers, he’s learnt to play the game. “I’m damn street smart like that. I’m bordering cocky,” he says, in half jest.

His first thoughts on being asked to write YJHD were, ‘Okay, this will give me enough money to eat three times a day and rent a decent house.’ That it would change the course of his career struck him later. He wasn’t entirely confident of his writing chops, since the only work he knew back then was acting, or so he believed. “I knew Ayan was looking for a writer. So I met him and said ‘I don’t know how to write, but give me something to work on and then you figure out if I can.’ He gave me three scenes to write. When he read them, he took me to the office and made me sign the contract. It all happened in three days,” he recalls. Even before the film released, he was signed on to write 2 States, another Dharma love fest. “I’ve grown up in Bhendi bazaar. I thought I’d write gangster films like Satya and Gangs of Wasseypur. Strangely, life had a whole different plan,” he says.

Urban love stories centred around college-goers seem to come naturally to Dalal. The lines are breezy, conversational and pretty close to what the youth of today sound like—a mish-mash of Hindi and English with obvious pop culture references thrown in. “The whole writing-for-stars thing is perhaps one of the reasons why we don’t have fresh content in this country. We are always trying to cater to how a star would say a line as opposed to the character,” he explains. Within those parameters, he’s trying to dabble in different genres. His film with Sajid Khan, who might never live down the debacle that was Humshakals, is one such experiment. “This is a whole different ball game for me. I’m having fun with it, let’s see where it goes. Let’s not be hypocrites and talk about experimenting only on TV and when it comes to doing work, play safe,” he says.

As an actor, Dalal will next be seen in Shonali Bose’s Margarita, With a Straw. He plays a college student with cerebral palsy who nurses a secret crush on actress Kalki Koechlin’s character. He’s flattered by the meatier roles coming his way post the Nescafe ad, but he seems cautious. Perhaps a tad more discerning than he is while selecting his writing assignments. “I’m getting decent acting work along with great writing work. Given a choice, I’d want it the other way round,” he admits. But he isn’t in a hurry to change that. As he puts it, “I’m still just a 25-year-old who does not need to work.”