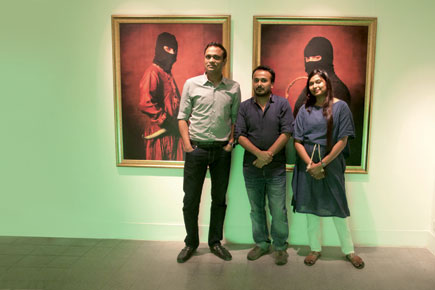 Studio 21 in Kolkata is a rather intimate art space. On the evening of 18 September, it hosted an art show that was executed painstakingly with as much emphasis on the conceptual framework as on the individual works. ‘Outliers’, curated by Manas Acharya, an experienced curator, artist and art- activist, has on display recent works by three artists, namely Anirban Ghosh, Ishita Chakraborty and Nilanjan Das, each with an individual scheme about the nuances of visual signs and their reception. The works, accomplished in various mediums exploiting different communication technologies and imaging devices, play with perceived signs, alter standard meanings and explore messages inherent to visual signs and syntaxes. The display works in harmony with the curatorial concept.

The title of the show, ‘Outliers’, in this context, as the curator Manas Acharya explains, ‘is concerned with the meaning of signs and its value as a message that lives or is located outside the given narrative. A grand narrative of the time and context! The signs which support existing power structures and which purport to be natural, as Roland Barthes saw it, [can be exposed] as the artificial constructs that they are, to reveal their workings and show that what appears to be natural is, in fact, determined by history.’

All three artists tend to indulge in a game of subversion, locating their works in a world where visual signs and symbols control and monitor our perceptions to a large extent in daily life. The youngest artist in this show is the Kolkata-based Ishita Chakraborty, who obtained both graduate and post- graduate degrees in Applied Arts from Rabindra Bharati University. She has already participated in a few national shows and workshops and stands out as a promising artist to watch out for. For Chakraborty, designs, especially advertising visuals, are meaningful, memorable and communicative. The ideas and techniques of industrial design as well as everyday objects and products and even spatial views inform her works in an interesting way.

Space becomes crucial to her artistic method as she moves to observe commonplace objects in their usual settings, segregated and compartmentalised. Yet, her meticulous and sensitive renderings, her application of the transparent tones of colour create a sense of intimacy where popular and mundane meanings assume the quality of a close inspection. This allows us the possibility of an uninhibited scrutiny of everyday objects around us.

Further, the artist offers the viewer a magnifying glass for a certain work, granting us an even more personal and almost private look that takes us well beyond the usual mass-consumed meaning of objects.

Chakraborty’s art seems to bear a deep and critical response to the massive cultural and political transformations that have taken place in our society, with an entire set of meanings and messages at stake. In doing so, she creates a whole world of signs that are invested with personal meanings. At the same time, she quietly confronts the political and social onslaught of ‘meanings’ produced by corrupt power structures and social incongruities. All this, while she foregrounds the idea that gradually losing faith in our traditional culture rooted in a highly inventive society is a serious issue. Once again, we are at risk of having valid meanings altered for the worse.

“We are under the dominance of political power and Westernised culture,” says Chakraborty of her art, “We very often find an artificial crisis in the market created by those who have immense power in their hands. Hence I have made use of traditional vintage icons to represent the present situation which is marked by corruption, struggle for power, influence of Western culture, changing social structures, suppression, domination and changing values of our society.”

The small intimate paintings and objects themselves are symbols and visual tools with which Chakraborty says she is addressing these issues. The power of her images lie in the transformations they convey.

Nilanjan Das is a Delhi-based self- taught artist who has been working on alternative mediums as a freelance artist and is also a renowned graphic designer who has bagged quite a few prestigious international awards. For this show, Das has divided his works into three sections for his take on, respectively, ‘American Superheroes’, ‘On the Far Side’ and ‘Abol Tabol in Today’s World’. He is well known as an enigmatic creator who fluently uses various kinds of materials and modern communication techniques to address what he sums up in his concept note, titled ‘if…’, thus: ‘These are troubled times; we live in a world where emotions are quantified. ‘Space’ itself has become a blurred term; ‘Time’ is going through a transition. Everything around us resembles a time-lapse video. It’s like a philosophical drought. How can art survive in this aesthetically challenged sphere? How do we define art anyway? What is the role of it? Can it bring a change? Amidst all this, an artist is in search of ‘art’ beyond illustration… art which has abandoned him in a rut… art which is juxtaposed between contemporary form, fine art and illustration.’

Das attempts to subvert the very definition of art as a whole. He takes the path of sarcasm with a political undertone to question the mundane, the palpable, and the mainstream. The overarching concept of ‘if…’ can be viewed in the context of the broader socio-political scenario. According to him, ‘We all voice the same concern— concern about the imposed imperialism of non-thinking culture.’

Working with that concept, Das explores three distinct but inter- related possibilities: ‘What if art could show what the world would be like with blurring political margins? What if art could imagine how the characters of your favourite nonsense fantasy world of Abol Tabol would be like today? What if art could capture American superheroes averting actual socio-politico-economical catastrophes?’ In the section ‘American Superheroes’, for example, Das uses fabricated photographs to re-imagine some pivotal moments in America’s modern history whose outcomes would have been dramatically different if superheroes had indeed risen to the occasion and saved the country from violent disruptions.

It is the visual manifestation of a tongue-in-cheek imagination, where an apparent valourisation turns into images of vulnerability, appearing at moments to poke fun at the culture of mass-manufactured superhero myths, so typical of America’s self image as a superpower. In ‘Abol Tabol in Today’s World’, Das redraws the famous absurd images from the book Abol Tabol by Sukumar Ray on X-ray plates, provides the images a certain kind of palpability and adds another register to the original images with a twisted meaning that hints at surreal existence. The world of absurdity and sarcasm is now confounded with serious intrigue. The X-ray plates function as mediators of this crucial transformation, raising such questions as: ‘Would their appearance be as funny? Would they resemble the icons and so-called leaders of today? Would the nonsense make sense again in the current, chaotic, confused and unreasonable world?’

The third artist in this show, Anirban Ghosh is a professional graphic designer currently working as Deputy Art Director at Open in New Delhi. Ghosh graduated from Indian College of Arts and Draftsmanship, Kolkata, in 2001 and acquired a post-graduate degree in graphic design from Rabindra Bharati University in 2004. With quite a few art shows already under his belt, he is well focused in terms of the issues he addresses in his works.

His Watch Out For Vegetarian Zealots, in ‘Outliers’, for example, is his take on the homegrown militancy that the culture of vegetarianism often adopts, with the line of fundamentalism crossed too frequently for comfort.

For Ghosh, an insistence on vegetarianism appears to be just another fanatic’s tool, almost a weapon that is used mindlessly, like an assault rifle, to attack a culture of tolerance. In his words, “They are food fascists— out to impose their idea of ‘right food’ on you. They’ll decide what you should eat and what you should not. If you don’t budge, they can even fix your taste buds, forcefully. Some people call them militant vegetarians, for they have an intense hatred for meat- eaters. Unlike vegetarian activists and die-hard animal rights activists in the West, they don’t believe in any sort of token protest—such as pretending to be cooped up naked in cages—in order to shame you or prick your conscience. These vegetarian supremacists would rather spit on patrons of non- vegetarian food joints, aggressively shut down non-vegetarian sections of shopping malls and throw out non- vegetarians from various housing societies. In some placesthey’ve already managed to ostracise butchers and fish mongers who make their living by trading ‘non-veg’ food.”

Ghosh uses the medium of photo-performance, where he himself poses as a fictitious militant holding vegetables fashioned into assault weapons. To lend it an edge of drama, he walks into vegetable markets and creates a live performance critique of the trend of rising food fascism. Outspoken about his works, he believes in taking a clear position through the artistic tool of derision. It is time, he believes, to expose vegetarian hypocrisy for what it is and unmask the food fascists who are out to ruin the culinary diversity of India. The entire panel of photographs, with awards and trophies installed in front of it, is an encounter in that sense.

Says Ghosh, “These veggie-zealots distort India’s history and propagate exaggerated virtues of vegetarianism, glossing over the fact that eating meat and fish has been a traditional practice in most areas of India. They do this in the name of religion, ignoring the fact that many ancient rituals call for non- vegetarian food items. This is actually a ploy to dominate and humiliate a particular section of Indians. There is an upper-caste religious agenda hidden behind the propaganda. And they wilfully ignore the diverse and universal principles of Sanatana Dharma that speak of a magnanimous set of duties for its practitioners, regardless of class, caste or sect.”

The works on display in the show have a political edge. Yet, by avoiding hackneyed metaphors and inventing new forms of symbolism to address the prevalent social scenario, they make viewers confront an experience that is more than political.

In all, ‘Outliers’ is a show about existence, about our tormented being, and about a vital need to look again at the perceived meanings of the abundant signs we are surrounded by.