Songs on Their Last Breath

Rajasthan’s folk music might be endangered, but its causes are ever relevant: caste and women’s empowerment 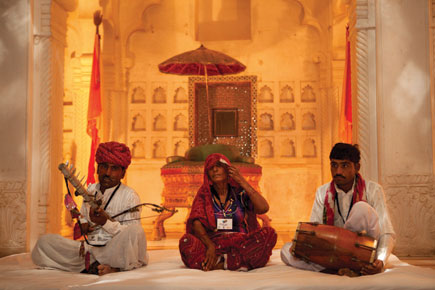 Rajasthan’s folk music might be endangered, but its causes are ever relevant: caste and women’s empowerment


As a cool breeze blows across its ramparts, Jodhpur’s majestic Mehrangarh Fort comes alive. Dainty Kalbeliya dancers and Bahrupiyas gather in the courtyards to yield a whiff of an ancient, and dying, culture. Once an integral part of the lives of people in this state, these performing arts have now been relegated to mere props—something to liven up dinners in Rajasthan’s five-star hotels.

That’s why the Jodhpur Riff (Rajasthan International Folk Festival) 2010 is significant. Though the performances at the festival range from collaborations with international artistes like Susheela Raman, Pete Lockett, Sona Mahapatra and Spanish Flamenco groups, the real heroes here are the Rajasthani folk artistes.

You can’t help but feel awe for these living legends. Whether it is ghoonghat-clad Patashi Devi, one of the foremost artistes of the Bhopa-Bhopi community, or the Meghwals of Marwar, for whom music is a way of standing up to the harsh caste system, each of them carries a piece of history along. One feels privileged to have witnessed these artistes, and heard their music, which is slowly becoming extinct. Here is a tiny window to their lives.

Thousands of sparkling rainbow clusters break out in Mehrangarh’s Moti Mahal as the multi-hued mirrors catch the sunlight. An unassuming woman sits in a corner with her two sons, peeping out from the corner of her ghoonghat. Little does one guess that this is the famous Patashi Bai, the star of the Bhopa-Bhopi style of singing. Hailing from Pabusar village of Churu district in Shekhawati, Patashi and her husband Mohan were known for their rendition of songs about Pabuji, the folk deity of western Rajasthan.

A couple of years ago, when Mohan lost a brief but harsh battle with cancer, her world fell apart. She had not only lost her soul mate, but also her partner in music. Traditionally, Bhopa-Bhopi songs are sung by a married couple, and without Mohan, her songs were

However, Patashi Bai refused to let go of her art. Music was her passion—more so since it reminded her of the times she had shared with her husband. So she started performing with her two sons, Bhanwara and Shrawan Bhopa. Though people did raise eyebrows at her unusual choice, her devotion to the music won their hearts.

The Bhopa-Bhopi community is one of the rare ones in the state that allows its women to sing in public. These artistes perform with an instrument called Ravanhatha, which literally means ‘hand of the demon god Ravana’. “Seven hundred years ago, the economy in western Rajasthan centred around livestock. The biggest crime anyone could commit was stealing someone’s cattle. Around this time, a local warrior called Pabuji laid down his life trying to protect his village’s pashudhan. All the songs that the Bhopa-Bhopis sing are dedicated to him,” explains Prakash Detha, anthropologist and one of the festival interactors.

Over the years, people from nearby villages started to invite these artistes to sing during festivals and on other special occasions. This not only gave a platform to these musicians, but also helped them earn a living.

A beautiful 12-feet-long phad or tapestry depicting various scenes from Pabuji’s life is held up during the performance. While the husband commences with the song, his wife follows with a lamp in her hand, throwing light on particular scenes being sung of at the moment.

There aren’t many today who are well versed with the legend of Pabuji. Patashi Bai, it is said, remains one of the last beacon of this story. In fact, when William Dalrymple was working on his book Nine Lives, it is from her that he learned of this legend.

Today, with the economy of western Rajasthan no longer centred around livestock alone, the youth can no longer understand the significance of this legend. For them, these are mere stories, a piece of fiction. Patashi Bai, however, is undeterred by such cynicism. She remains dedicated to her music. “There are still some people who appreciate this music. I get about 10 to 12 jagrans a week. That’s enough for me,” she says shyly.

The strains of the veena can be heard from afar as dusk settles on the beautiful blue city of Jodhpur. Clad in white, there is an ethereal aura about the 11 Meghwal artistes from Marwar. They break into the song Jheeni jheeni re chunariya—heartbreaking, enchanting, uplifting, all at the same time. Though hailing from different villages of Marwar, the 11 are related to each other. Each has a distinctive style of singing. Especially wonderful is the style of Surdas Punma Ram, who strums the veena with perfection. “Even though he is sightless, the vision he has in mind is so beautiful,” says festival director Divya Bhatia.

One of the songs talks of the pain that only a pierced heart can understand. It somehow brings to the fore the struggle these 11 artistes have faced in their lives. Trapped by the cruel shackles of the caste system, fresh challenges are thrown at them almost daily. Listed as part of India’s Scheduled Castes, Meghwals have faced constant humiliation at the hands of Brahmins for generations. “We can’t sit in a chair when they are present. If we go to a dhaba to have tea, we need to wash our own utensils. Even the barber refuses to cut our hair,” says Ajitha Ram. And yet, the community prides itself on being a gentle and kind lot.

For them, their music is everything. It is a meditation of sorts that allows them to rise above these daily worries. Their patron saint, Ravi Das, is their source of inspiration. Most of their songs are dedicated to Ravi Das, who is also believed to be Meera Bai’s teacher. “He was the first one to speak out against the caste system. His efforts fill us with strength and optimism,” says Ajitha Ram.

It is 5.30 am and Jaswant Thada, the royal burial ground, is serving as an unusual venue for a music performance. The strains of the ektara are slowly goading the sun to come out of hiding, while two women in simple saris and ghoonghats are waiting patiently for the audience to settle down. It isn’t usual for women to play the ektara in Rajasthan, and that’s what makes Jamuna and Mali Devi so special. “In the past ten years, I have gone to 150 villages, but I have never seen a woman play the ektara,” says Vinod Joshi, regional director of the festival.

Residents of Charan Wasi village in Shekhawati, the two sisters perform at jagrans across the region, spreading the teachings of Kabir and Meera through devotional songs. They learnt this form of music from their father, Ganga Ram, who was a local priest. “They are from the Naik community. At a time when there were no formal schools of spiritual learning, minstrels like these would travel from village to village, singing about God and goodness,” says Divya Bhatia. It was their strained financial conditions that led the sisters to take up the tradition 15 years ago.

As the skies lighten with the first rays of sun, their rustic, powerful voices echo across Jaswant Thada. They are singing a Kabir bhajan that asks people to leave their egos aside and seek enlightenment through humility. The 40-year-old Jamuna Devi is the lead vocalist, and can often be seen giving directions to her elder sister, Mali, during the performance. They feel blessed that their unconventional decision didn’t elicit negative reactions from villagers. Their spouses, too, were extremely supportive. “My sister Mali’s husband passed away some years ago. A lot of girls like her, who got widowed early, would take up devotional singing,” says Jamuna. She starts giggling like a little girl while talking about her husband. “Just like the ektara, which has all the 36 ragas and ragini within it, he too has all the goodness inside him. Though he is a farmer, he understands my art well,” she says.

Jumma Khan Jogi and the Bhapang

It is a sound unlike any you would have heard before. A rare single-string percussion instrument, the bhapang is also known as the talking drum. Inspired by Shiva’s damru, it is hollow on one side, with a string running through it. It isn’t easy to play the bhapang, that much is evident. It requires the mind and hand to be completely in sync. Though there aren’t many bhapang players left in Rajasthan today, there is one artiste who has been spreading its glory far and wide.

Jumma Khan Jogi comes from an illustrious family of bhapang players. While traditionally the lyrics accompanying the bhapang beat talk about legends from the Ramayan and Mahabharat, Jumma Khan’s songs are a little different from the rest. His modern lyrics are inspired by present-day socio-political conditions, and often highlight the urban-rural divide. Jumma’s song, Phuljhari, has been creating waves in the international circuit, winning acclaim at this year’s iTunes festival in London. “Just like people in the city call their beloved  ‘darling’, in villages we call them phuljhari. After I performed this song in London, all I could hear from audiences was  ‘once more’,” grins Jumma.

Though he feels happy at the response he has been getting from people, it isn’t enough. He is the only one left in his village who plays the bhapang. It angers him to see that the Government has been making no

effort to save this instrument from extinction. “Even if the Government decides to organise something, they want lots of money in return. I am illiterate, but even I know when someone is trampling over my rights,” says an incensed Jumma.

If not for festivals like Riff, he would have quit the tradition long ago. “It is for this reason that I don’t want my children to learn this art. There is no financial security in it,” he sighs.