Side Effects of Stardom

What fame does to Bollywood stars 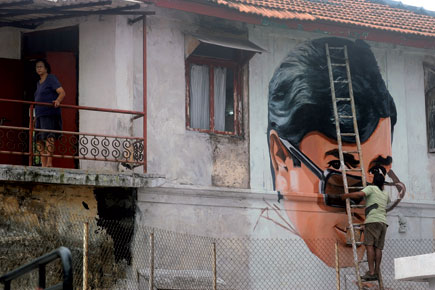 What fame does to Bollywood stars


This happened in Florence, Italy. A man walked into a restaurant with his family and was ushered to a dimly lit corner table. Then, two things happened. One of the waiters, an Indian, had his jaw drop and eyes widen in recognition of the man. And the man, in recognition of this recognition, had his attitude transform from one of casual nobodiness to conscious starriness. The man was Shah Rukh Khan.

There are two points to consider here. Something happens to us when we see a filmstar. We cheer, scream, shriek, shout, jeer or wave out, reacting in different ways. Our reaction implies there is something about the star that demands a response. But something also happens to the star. The line between person and persona gets blurry. And when that occurs on a daily basis, the person can become the persona. Perhaps nowhere is this more pronounced than in Bollywood.

Bollywood is full of ‘horror stories’, as one movie scribe puts it, about the side effects of fame. “Some actors start behaving really badly after a successful Friday,” says Rauf Ahmed, a senior film journalist and editor who has seen the biggest stars at close quarters. “Rajesh Khanna is the perfect example I can think of.”

Khanna, who many consider the Hindi film industry’s first superstar, is emblematic of all the excesses that come tagged with stardom. Narrating a classic Khanna story, Ahmed says, “He would keep his directors waiting all the time. He expected the world to function according to his whims. He kept filmmaker BR Chopra waiting in Srinagar for three consecutive days. The fourth day, he sent his cook on his business class ticket.”

Justifying such high-handedness, Khanna once told Ahmed, “People come to see my films to see me.” In truth, they did. With a dozen consecutive hits to his credit at the time, you couldn’t argue with him. “Rajesh Khanna cultivated a coterie around him, which kept reassuring him that he was a great star,” says Ahmed, “And surprisingly, he rewarded them for their loyalty. He may have antagonised many others, but he was nice to his staff.”

Speaking of how fame has destroyed promising careers, Ahmed points out the peculiar case of Navin Nischol, the late actor. According to Ahmed, Shashi Kapoor’s role in Deewaar had first been offered to Nischol. “Navin refused to play second fiddle to Amitabh Bachchan. His contention was that he had played a hero to Amitabh’s villain in Parwana in 1971. And look what a disastrous decision it was. From that point onwards, Shashi Kapoor and Amitabh became the most successful male pairing of the 70s, while Navin’s career never recovered.”

Hubris is just one aspect of fame. It triggers something within a person, affecting the outer as much as inner personality. “Success has destroyed more people than failure,” writer Salim Khan told Bombay Times recently in response to Dabangg 2’s record opening. “I have seen Sholay only twice, once in 35 mm and once on 70 mm,” he added, “But Imaan Dharam, which was a flop, I saw eight times to see where I went wrong.” Khan’s candour contrasts with his son’s antics. A few years ago, Salman Khan slapped a fan at Anil Kapoor’s birthday bash. The fan had tried to kiss him. “At home, Salman Khan is Salim Khan’s son,” says an amused insider, “Outside, he thinks he is Salman Khan.”

Govinda behaves just as outrageously with his fans. He is notorious for his hair-trigger temperament and loony outbursts. “I was once with him and there were fans hanging about,” recounts a journalist, “When they approached him for autographs, he got antsy. Then he started grilling them as if they were suspects. He asked them their names, dates of birth and even marital status.”

You may pin Salman Khan’s idiosyncrasies on the nature of his stardom. But what explains the way that younger overnight successes behave? Take Ranveer Singh. His “psychotic and half-mad” consciousness of his own appearance, as an assistant who worked with him on a film reveals, is bizarre enough. Before any public appearance, the assistant says, he conducts closet trials. “And there is this mannequin. He makes it wear clothes and ponders how it looks on the mannequin to imagine how it will look on him. He loves colour. Just imagine the mannequin wearing a pink T-shirt, yellow blazer and green shoes… and now imagine him imagining that mannequin.”

Ahmed says such weirdness tends to attend only male stars. “With female stars, it’s mostly about one-upmanship.” Anushka Sharma is said to be unduly obsessed with Katrina Kaif, her rival in Jab Tak Hai Jaan. “She researches Katrina’s looks on Google—her hair, skin and makeup. But then it’s not her fault, really. Competition is so tough. You have to be at your best at all times,” says an assistant makeup artiste who worked briefly with Anushka Sharma in her earlier films and has borne the brunt of many an actress’ peculiarities.

Usually, it is the media at the receiving end of a star’s mood swings. A cameraman and a reporter with a leading portal went to meet Sonam Kapoor recently. After being made to wait a few hours for an audience, when she was finally ready to take questions, they noticed she was in a grumpy mood. Put off by their line of enquiry, she threatened to yank the tape off. She didn’t quite do that, but did ask them to leave. The same crew was meted out similar treatment by Rani Mukerji, who behaved “as if the camera was not a camera but a gun”, in the words of the hapless reporter. “She behaved as if she owns Yash Raj Films—which she does, for all I care,” fumes the reporter. “But that still doesn’t give her a reason to treat the press like that. First, [film artistes] cry to be famous. When they become famous, they want to hide from the cameras. What’s the point?”

Vidya Balan doesn’t seem to agree. As she recently told The Times of India, “I enjoy it that people want to know about me. This is what I’ve worked for.” KS Sanjay, a long-time associate who quit her employment only recently, says stardom hasn’t changed Vidya Balan because “she is not treated like a star at home”.

Sanjay believes that it is up to a star’s family to serve him or her a reality check. Madhuri Dixit, he says, “remained a humble, middle-class Marathi woman all her life”. He also recounts an anecdote of Meenakshi Seshadri back when she was one of Bollywood’s top stars: “I went to meet her to discuss a project. It was well past nine and she had just finished dinner. She asked me to wait because she had to wash the plates in the sink!”

Family values, many believe, act as illusion poppers. Take this heroine, whose ascent from a modest Malad dwelling to an expansive haven in Andheri has been enviable; ‘fed up’ of taking early morning domestic flights, she once asked her father to arrange a chartered plane. “Don’t forget where we come from,” was her father’s stiff reproach.

“Stardom is power. And as power can corrupt those who have it, so can stardom,” says Amin Hajee, a close friend of Aamir Khan and someone who has seen enough of the industry to make that claim. “My own experience is that I have seen people change, and when you tell them that ‘Boss, you have changed’, they don’t fucking believe you,” he says.

Hajee knew Aamir Khan before the latter’s stardom. “Yaar, humlog vada pav saath mein khaye hain. Panchgani mein neeche jaake dhaabe mein khaye hain. Abhi kya boloon main? (We have broken bread together, driven down Panchgani to eat at road-side eateries, now what should I say?),” he says, promising to be ‘objective and fair’ about his friend. “When Aamir was shooting for Mangal Pandey: The Rising, he got an offer from Opel, the car brand. He asked me how much he should quote. When I said not less than Rs 10 crore, he was shocked: ‘Arre yaar, pagal hai kya?’ (Are you crazy?) Though he didn’t get his asking price for that particular commercial, in a year’s time he was earning as much from others,” he says, adding, “Today, Aamir Khan as a brand is valued at more than Rs 2,000 crore. Aaj bodyguards aa gayen hain, bandookein hain, log aage peechhe ghoomte hain (Today, he has gun-wielding bodyguards and is surrounded by people). Do you think it hasn’t affected Aamir? Usko bhi samajh mein aata hai, boss, ki kuchh change ho gaya hai. (He also realises that something has changed).”

Hajee insists that Khan has handled his fame “exceptionally well”, though. What has changed are people’s perceptions of the star, he says, and this has put him under pressure. “Every time he becomes more successful, he becomes—I can’t use the word ‘fanatical’ because that would be a wrong way of putting it—even more careful of what he is going to do next. Fame hasn’t made him less creative, but more careful. Aamir Khan doesn’t make the same mistakes. He is famous because he has learnt not to repeat mistakes.”

The relentless glare of the limelight can be taxing. That’s why stars put on a public façade, a mask to hide their real selves. Ahmed says modern-day dynamics demands it of them. “There was a time when Jackie Shroff and Anil Kapoor were fighting for top billing. The fight really was—‘Who is more famous, you or me?’ Now, the fight is—‘Whose image is better, yours or mine?’ Take Amitabh Bachchan. There was a time when he banned the press. Today, he is so gracious with the media.” This façade, Ahmed says, helps celebrities lead normal lives to the extent possible. “Stars never do certain things in public. They are conscious of their image. With electronic media around, they have to watch their moves all the time,” he says, “So, even if they pretend this goodness, this holier-than-thou attitude, they do it because they want a clean image. Let’s not forget, with fame comes responsibility.”

According to a hairdresser who does celebrity work, fame heightens a star’s sense of isolation. “I have seen it with my own eyes,” says she, “They are trapped in a cage. They don’t trust people and react in extreme ways when a situation merely requires them to be normal.”

That explains why they work so hard to create “space” around themselves, little bubbles of safety where they can let their guard down. Ahmed says stars behave like stars because we refuse to see them as common folk. “They are nothing but people like us, just that they appear flawless and larger-than-life, while we are flawed and ordinary to ourselves.”

Hajee, however, says fame makes them more perceptive—and, counterintuitively, more human as well. He has another Aamir Khan story: “We were driving from Panchgani to Satara to see a valley of flowers. I was driving in one car. Aamir was following me in another. Midway, I got confused and took a wrong turn into a no-entry zone. When the cops stopped me, I told them that Aamir Khan is with me. I apologised for my mistake. They let me go but caught Aamir.” But that’s not the end of the story. “Even before we reached the valley, the news had spread like wildfire,” he continues, “Within 20 minutes, the headlines had: ‘Aamir Khan fined for traffic violation.’ Aamir drew a deep breath and said, ‘Amin, we have to be very careful next time—very careful.’”