Sculpture: The Primeval and the Modern

The philosophical and the political permeate an exhibition of sculptures 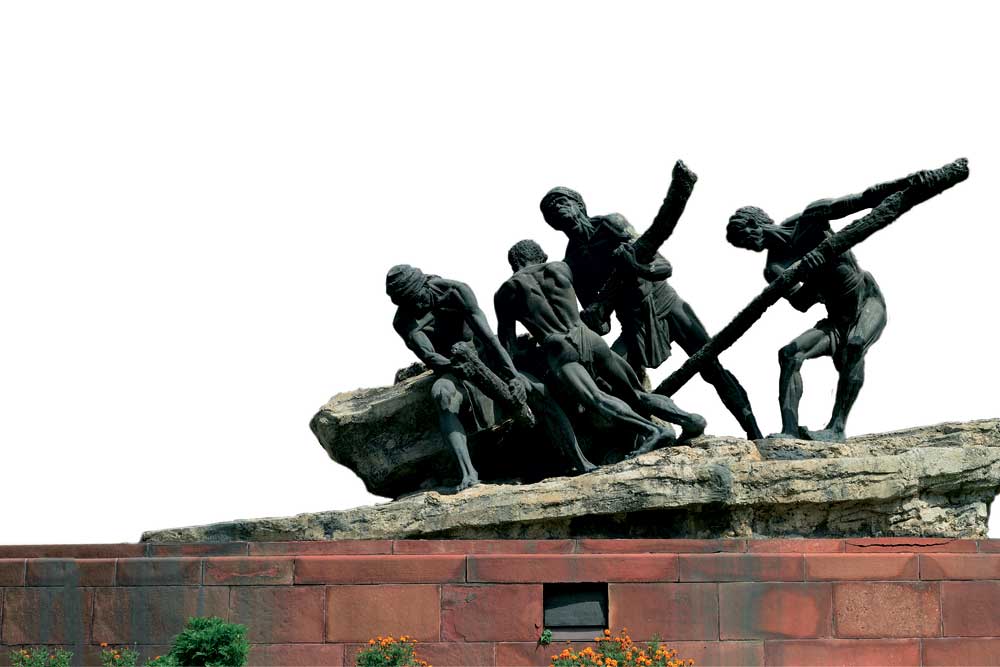 WE MAY HAVE passed it many a time in Chennai’s rush-hour traffic and not paid heed to the sculpture of four men struggling against a large rock. Their muscles strain and clench, as they attempt to shift a large rock, using crowbar-like implements. They toil to dislodge a weight, which is much greater than their individual ability, but collectively it is imagined that they succeed. The dynamism of the men is set off against the immobility of the stone. As a viewer, you cheer for them, wanting them to triumph and miraculously complete the task at hand. This inspiring bronze sculpture is by late artist Devi Prasad Roy Chowdhury and is aptly titled Triumph of Labour.

One cannot miss the Marxian spirit underlying Triumph of Labour. It captures the sentiments of a newly independent India when it was erected in 1959 at Marina Beach in then Madras. Choudhury is said to have modelled the work on the iconic World War II photograph Raising the Flag on Iwo Jima. He was also influenced by French sculptor Auguste Rodin, who brought realism to the human body, and one sees the influence of the West in this work, even though the sculpture possesses an indigenous quality that smells of mitti. Not only are the figures modelled on the slight but strong Indian physique, it also celebrates the unsung working-class heroes of the freedom struggle—the peasants and farmers— whose daily struggle is often overlooked.

A limited edition of the sculpture at the National Gallery of Modern Art (NGMA), Delhi, forms the centrepiece of an ongoing exhibition titled Itihaas that marks the 63rd Foundation Day of the Gallery. Showcasing the work of around 22 artists, including some paintings and drawings, it primarily celebrates India’s prominent sculptors like Devi Prasad Roy Chowdhury, Ramkinkar Baij, Sankho Chaudhuri, Dhanraj Bhagat and Sarbari Roy Chowdhury.

These ‘founding fathers’ provided the foundation of Indian sculpture on which many have built since then. Amongst them, Baij is considered one of the most indigenous artists, since his sculptures followed neither the academic realism that most artists were inducted into, nor the Modernist influences of sculptors like Constantin Brâncui (from Romania) or English artist Barbara Hepworth. While most of the sculptors worked in brass and wood, Baij chose to work with cement and concrete. His Santhal Family is perhaps his best-known sculpture and is permanently installed at Kala Bhavan, Santiniketan, in West Bengal. Sadly, ‘representations’ of the actual work do not do Baij’s monumental sculptures justice. The energy embodied in each of his works is unparalleled and best enjoyed by visiting it onsite. Which is why it is thrilling to see a rare sculpture by Baij at this exhibition. It is a highly abstract bronze of Rabindranath Tagore that captures Tagore’s complexity and genius while playing upon his vulnerability and sensitivity.

To walk around the serene gardens of NGMA is to witness the journey of Indian art. If on one side you have the realistic Triumph of Labour, on the other is a highly conceptual sculptural installation by Subodh Gupta, where he creates a banyan tree from his signature steel utensils. Titled Dada, it speaks of Gupta’s humble beginnings in Bihar, where much of his childhood was spent in his mother’s kitchen watching her cook. “My utensils are shiny but empty,” says Gupta, “The emptiness tells of the underside of showy progress,” he adds. This work was installed during his solo at the NGMA and has now become a part of the Gallery’s permanent collection.

An exhibition of this nature is important and timely since sculpture has always been the step-child of the art world. Unlike painting, which can easily find wall space in galleries and households, it is harder to shelter large sculptures in private collections (where most of the money for art comes from). It often falls upon government organisations such as the NGMA to house, display and maintain these sculptures, which is no mean task. “I want to show art lovers, friends, teachers and students of art that the NGMA has works that present the history of modernism in Indian contemporary art. These works are like milestones in the history of contemporary art,” says Adwaita Gadanayak, director general, NGMA. This exhibition does not disappoint. The NGMA has an extensive collection of sculptures, many of which are overlooked during a casual visit but come into their own when showcased in an exhibition of this nature. “This exhibition is indeed a rare opportunity to view celebrated sculptures and gain insight into artists’ creative genius,” says Pradeep Kumar, director, NGMA.

Besides the early realism that one sees in Triumph of Labour and the works of Sarbari Roy Chowdhury—whose busts and heads have an endearing quality— the next generation of artists like Sankho Chaudhuri also proves their mettle. Chaudhuri’s work conveys the liquid form of a bird in flight or the abstracted form of a woman, capturing her essence in a few master strokes of the chisel.

‘The NGMA archives is an endless contemplation of the human condition,’ writes critic Uma Nair, ‘These works seem to express the revelation that we are our architects of imagination— and that through art, liberated from the constraints of conventional academism, we can discover new possibilities of both mind and spirit,’ she adds. “The indigenous modernity of Ram Kinkar, the Rodinesque brilliance of DP Roy Choudhury, the sensitivity of Prodosh Dasgupta and the beauty of knowing they were all great pedagogues, positions this show as a definitive sojourn in the modernist trail of the Bengal School at the cusp of weaning away from British academic realism,” she explains.

Branches of NGMA in Bengaluru and Mumbai also have stunning collections that highlight the contributions of sculptors like Himmat Shah, KS Radhakrishnan, Valsan Kolleri, NN Rimzon and Ravindra Reddy. One gets a sense of the journey where the strength of the indigenous voice of the Indian sculptor emerges and becomes full- bodied and masterful.

Notably, most sculptors have been male, since it is stereotypically believed that sculpture required a certain vigour and strength, singular to men. Artists like Piloo Pochkhanawala have proven that is not the case, with her strikingly modern and minimal sculptures. Her sculptureOphelia captures the spirit of the primeval and the modern. She has digressed from well-knit boundaries of space to create new aesthetic strategies. Later, sculptors like Mrinalini Mukherjee joined the ranks of the all- male club. One cannot forget her tragic demise on the eve of her solo exhibition at Delhi NGMA’s new wing that showcased her stunning jute sculptures and delicate ceramic work.

This exhibition brings into focus Latika Katt’s early work. Her famed portrait of painter Jairam Patel captures the eccentric nature of the reclusive painter with poignancy.

One is also constantly amazed by the innovative interpretations that sculptor and installation artist Anita Dube brings to her work. In today’s cosmopolitan age, it may appear antiquated to make an argument for women sculptors, but we must acknowledge their contribution to the art.

(The exhibition will be on view till end May, (except Mondays and national holidays) at the National Gallery of Modern Art, Delhi)