Resisting the Brush Off

Incensed by the media’s indifference to Indian art, Satish Naik began publishing his own magazine, one whose articles are often seen as works of art in themselves 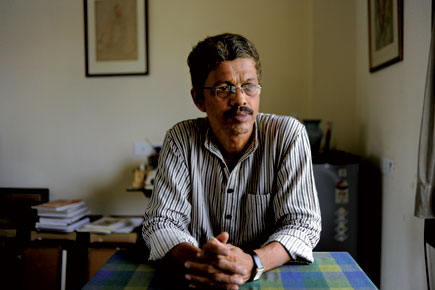 Incensed by the media’s indifference to Indian art, Satish Naik began publishing his own magazine, one whose articles are often seen as works of art in themselves

It takes a special kind of madness to fuel the passion of a person like Satish Naik. The artist, who was also a journalist, was angry with the treatment meted out to art by the Indian media. The madness festered like a wound for years until the death of a veteran artist he admired led him to channel it into a publication called Chinha, a Marathi art magazine that Naik has single-handedly run, irrespective of profit or loss, for over 12 years.

He has run it all this while from his house, helped by his wife, son, daughter and a couple of staff members. Most of the money earned by the magazine is put into the production of the next issue.

As a young student, Naik, an avid reader himself, was content bringing out an art magazine with his friends. He even helped with a magazine on theatre. He later joined the Indian Express Group and was soon disillusioned with the media’s view of art. So he started his own art magazine, Chinha—‘symbol’—and ran it from 1987 to 1990, after which he devoted his time to journalism.

But the death of Vasudeo Gaitonde in 2001 changed that. Angered by the too-brief obituary in The Times of India, Naik decided to restart Chinha to give Gaitonde his due. Since that issue, which had a special supplement on the abstract artist, Naik has published Chinha every year. He featured Gaitonde again in 2006 and 2007.

Almost every issue of Chinha is a collector’s item, with profiles or interviews running into many pages. Chinha has always made a statement—be it an issue themed ‘Nudity in Art’, or an exposé on the politics within what was once the country’s premier art institution, JJ School of Art. Sitting in his house at Kasheli village near Thane, Naik, an alumnus of the School, says: “It is sad, but truly the politics of caste has ruined the institute. Qualified people have been pushed aside and unqualified people have assumed positions of authority on the basis of caste. This is why I did not allow my son to study there. What is even sadder is that though Chinha made waves with that issue, which caused a few changes politically, nothing has improved in the School. Students continue to lose.”

Not content with having featured Gaitonde in the magazine, Naik embarked on a mission to create a book on him. He started work on it in 2007. The mammoth book, titled Gaitondenchya Shodhaat – In Search of Gaitonde, will be published in October 2013. In fact the room where Naik works on Chinha is full of books, old issues of the magazine and information he has collected for the book on Gaitonde.

There wasn’t much literature available on the artist, who did not like to talk and kept largely to himself. But Naik had kept newspaper clippings of a rare interview Gaitonde had done, and asked well known artist Laxman Shreshtha, who considers Gaitonde his guru, noted artist Prabhakar Kolte whose works Gaitonde admired, and Dadiba Pundole, owner of the Pundole art gallery to whom Gaitonde gave many of his works to display, to write about him. Naik even managed to track down Gaitonde’s sister and niece and persuade them to write for the book. Some previously published articles in Chinha will also be republished.

Also to be published is Gaitonde’s horoscope patrika. Says Naik, “Gaitonde’s father understood horoscopes and had predicted that if he became an artist, he would not get anything financially—the world would. So he would beat him up, tear his paintings etcetera. This is why I will publish the horoscope.” Sadly, time has proven the father prophetic.

Part of the Bombay Progressive Artist’s Group, Gaitonde, like others in the group, exhibited his works internationally.

Today, his works are in collections both in India and abroad. In 2014, a Gaitonde retrospective will open at the Solomon R Guggenheim Museum in New York City. This will be the first time the museum will feature an Indian artist. The retrospective will tour the world, ending in New Delhi. Naik will translate his book on Gaitonde into English, and it will be made available as an ebook on the occasion.

MF Husain once described Gaitonde as one of only two “genius painters in India”, the other being Prabhakar Barve. Naik intends to bring out a similar book on Barve.

Of late, Indian art and artists have become the toast of the Western world. So is the Guggenheim belated in its recognition of Gaitonde’s work? Naik feels so: “Yes, the Guggenheim is late in bestowing such an honour on an Indian artist, but the fault also lies with the Indian media, which has failed artists—the reason being our tendency to cover Picasso, not Gaitonde. We tend to write about foreign artists. We don’t recognise the significance of our [own] artists.”

He is still annoyed with the media. “Closer home,” he says, “I have also felt that Marathi editors have failed to give enough importance to Marathi artists. Unlike Bengali newspapers where the editors give space to Bengali artists, Marathi editors never give art enough space.”

Naik’s answer to this problem is Chinha. Through the years, he has faced several problems in bringing out its issues. People have promised advertisements and backtracked at the last minute. The only commercial billings typically come from artists advertising themselves, patrons who are aware of his dedication and struggle to bring out the magazine.

But the years have taken a toll on him and he intends to stop the print magazine after the next issue. “I want to paint,” he says, “I am an artist.” However, he will put up Chinha’s earlier issues in English online and may upload new articles on the site as and when he can.

The loss of Chinha will be a big one to the world of art journalism. Naik is well aware of this and is even willing to pass on the baton to another person who will take on the magazine. He has recently been invited to meet the executives of two banks who want to sponsor the magazine. But while this seems to promise a new beginning, Naik is firm on his decision. Chinha has carved a niche for itself in the sphere of art magazines. The magazine’s articles are often as noteworthy as some works of art, says admirers.

But while Naik’s decision to move on spells a loss for journalism, it could be a gain for the canvas.