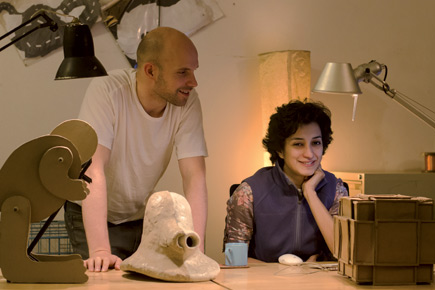 When one walks into the studio of Bangalore-based artist collaborative Pors & Rao in Benson Town, it is easy to mistake the place for an office of an electronics-related firm, with bespectacled engineer- types peering at large computer monitors, technical manuals lying about, sorrounded by whiteboards with equations on them.

Outside is a stark contrast: next to yellow and orange benches, bright saffron fish dart in a small tank under lotus leaves; there are plants collected from everywhere. These living, breathing organisms juxtapose with the artworks that are being realised inside, where Indian artist Aparna Rao, 36, and Danish artist Soren Pors, 40, work. They have two shows coming up by the end of this year, a biennale to participate in, though they can’t offer details yet. They have signed on recently with GallerySke to represent them. “A show there might happen next year,” says Rao, the vagueness of time and details courtesy of the very lengthy production time their works require. Sunitha Kumar Emmart, gallerist at GallerySke says, “The process of Pors & Rao’s works involves huge collaboration, apart from involving basic human emotions. For me, their works deal with what we as humans deal with. Their’s is a unique practice in the country and we are excited to represent them.”

In a society that is increasingly slavish to technology and in a city that pays ode to it, their main interest lies in behaviour. Their works try to capture the innocent, ephemeral, organic expressions of behaviour and how these can vary. It is an interesting contradiction. Technology that permeates modern lives, technology that can be perceived as cold and distant, is used to help express emotions and behavioural patterns in the creatures they create. The manner in which they use something so inescapable to talk about issues deeply personal is what makes the work of these contemporary artists relevant and exciting in the Indian artscape. Both live and work in Bangalore; in the manner of the silicon city, their works are wholly global, with almost no localism in evidence at all. Their works have been showncased at museums and galleries around the world.

Reimagining the ordinary as something creative, clever and hi-tech is how the work of Pors & Rao is often described. Their multidisciplinary art practice has been called ‘humorous’, ‘edgy’, ‘interactive’, ‘quirky’—words they vehemently disagree with, especially the ‘interactive’ part. But before getting to what their works are not, let’s begin at the beginning.

Rao goes back to how she always wanted to be an artist as a child but felt that she was not good enough. “I wanted to find my own language, my own voice,” she recollects. By the time she was going through college (National Institute of Design in Ahmedabad), the Internet had exploded. A two-year long research scholarship in Italy that sought to look at technology in a different way culminated in Rao finding Pors, an artist from Denmark, to collaborate with. “It happened organically. I have always loved animals, dabbled in martial arts, some sports, so the idea of physical presence was very important. I started to have an aversion towards how rapidly all our previously varied, physical actions were being replaced by virtual ones where keys are pressed for tasks like writing letters, do grocery shopping, pay bills. The art as almost an instant reaction to that was the need to re-physicalise, and work with movement, performance and physical forms,” she says. Their collaboration began in 2004.

Even as Pors & Rao took to technology, both became “slaves to the idea of making something physical” using technology, which Rao calls “expensive and very, very difficult.” The prohibitive costs and dearth of technology experts who would take them seriously initially made them work day jobs, taking five to six years to finish their first work. “A lot of support and mentoring came from senior scientists pro bono at that stage. That was invaluable, both in realising the works and getting a grip over the medium. These 12-13 years have been a long journey for… from an artistic, existential point of view. It is much better now, but still very tough,” says Rao.

‘Very tough’ because works like Pygmies, where 509 black silhouettes of tiny creatures peep from behind white panels and react to sound by hiding, each moving differently to create a lifelike reaction akin to, say, curious squirrels or mice, requires complex electro-mechanical integration. If Pygmies reacts to sound, several of their other works are activated by human presence.

Technical specifications are something they have to fight for. Precision is crucial for every work, like Heavy Hat, where an upside-down man, his head full of heavy thoughts, moves around in a constrained circle. When a viewer walks in, the figure moves slowly and almost seems to fall, provoking the viewer to want to go over and help the man. Almost painfully drawn out mechanics were beaten out into shape over several years, for it was necessary that the upside-down man not fall and damage the sculpture itself, yet there needed to be enough of a fall to instill a sense of fatalism. Technical challenges run as a common thread in all the works of Pors & Rao. “It can take between two and eight years to finish a work,” Rao tells me, adding, “We don’t stop until we are completely satisfied with the quality and expression of the form and movement.”

Rao finds it hard to rationalise how the process of a new work begins. “A lot of my adult life I have spent with Soren, but we are not a couple. Over the years we have developed our own private world. An idea might spring from a conversation, a dream, a drawing, anywhere, and we pick the one that presents the greatest sense of urgency,” she says. This sometimes takes years and is always organic, mostly unpredictable. A lot of conceptual work follows, models are made with cardboard and clay, sketches are drawn and software is used to simulate the way they want the objects to behave. After about six to eight months of this, collaborators are brought in, often from around the world. “Earlier on, it was hard to find engineers who understood what we wanted and were able to deliver, against professional agreements,” they say. But things are better now, with a robotics scientist, a kinematics professor and a systems engineer as mentors on board.

Their works engage in slapstick, lifelike movements. Not stiff like robots, but not entirely like humans either. This, more often than not, lends to their works an element of humour. “Working with humour is not intentional at all,” says Rao, insisting that she was always the serious, shy introvert. Nor are the works ‘interactive’; neither likes the word. “Interactive to me is where you give an input and get an output. We don’t ask anything of the viewer, no ‘press this button’, ‘pull that lever’, etcetera. Some of the works are responsive and react to the natural movements and behaviours of viewers,” says Pors. The duo also contend that there is nothing cutting-edge about the technology they employ in their work, but what they do with it is new. “The technology is 50 years old. It is just that not many people have tried to build anything like this before.”

One of their most well-known works, Teddy Universe, with thousands of fibre optic lights embedded in faux fur in the shape of a teddy bear, is under bubble wrap. It has come to the studio for some maintenance. This work apart, all the others, like Split Knife, especially Decoy, have a very factory finished look. How thin is the line between design and art for them? “Everything is in the service of art, be it the use of technology or design,” says Rao. While the idea behind each work is deeply personal and rooted in behavioural patterns, the polished consumer aesthetic depersonalises and creates an interesting distance between the two experiences. They currently have some eight or nine projects in the pipeline, at various stages of production. There is Imperial Monochromes, where panels remain in languid disarray until a viewer walks in and they snap to attention. Clappers, where 996 small figures arranged in an amphitheatre are enabled to clap whenever they want, and Framerunners, where figures run within the frame, only to hide when a human presence is detected. For all the technology they use, Pors & Rao, surely, must be techno geeks themselves? “We don’t love technology, we are allergic to it,” says Rao, insisting they perceive it only as a necessary evil, like having to go to college.

They pose for the last set of photos with cardboard and clay models of ongoing and scrapped works. A prototype for Space Filler, a work in progress, lies nearby. Aguirre,their pet Doberman, is tearing about the studio. The engineer- types are saving simulation videos on Basecamp, measuring something, or making notes. It is work as usual in the studio.