Out of the Lunchbox 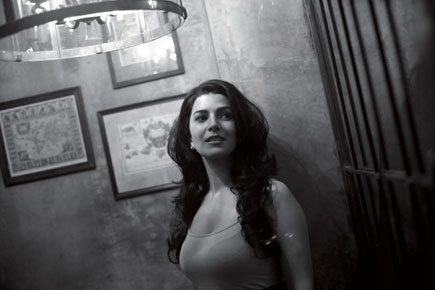 
Two days before The Lunchbox bagged its nomination for Best Foreign Film at this year’s British Academy of Film and Television Awards (Bafta), Nimrat Kaur is at Prithvi Cafe in Mumbai for this interview. “It’s been so long since I came here,” she says, drumming her lean fingers on the wooden table. Dressed in a red printed dress and nude stilettoes, she scans the space for familiar faces from her theatre days. Her presence has created a stir in the café. A woman in a printed salwaar suit nervously walks up to our table with her son, and asks her, “Aap Lunchbox mein thhi na? Bahut achhi acting ki!” (Weren’t you in Lunchbox? You acted very well!) She thanks the lady, poses for a picture and returns to our conversation. “As a kid I loved public attention. I loved to know how people react to things I do,” says Nimrat Kaur.

It is a bit more than an appetite for attention that has gotten her this far, though. With The Lunchbox, she shot to fame as the Indian actor to watch out for in the international circuit. If Frieda Pinto is known for her red carpet moments, Nimrat’s performance in the film marked her out as a sensitive performer. From Cannes to Berlin to cities whose names she still cannot pronounce, the appeal of that film proved more universal than one could have imagined. She calls it providence; others call it pure performance.

The film got her a part in one of America’s most popular TV shows, the critically-acclaimed political thriller Homeland. From a neglected housewife cooking meals, she is now juggling conspiracy theories in her latest role as a devious Pakistani ISI agent. “I’m playing Tasneem Qureshi who is CIA agent Claire Danes’ nemesis in Homeland. Claire’s character is the backbone of the show. Anyone who is up against her has to be as strong,” says Nimrat, who did not think twice before jumping into a London Underground tube and heading for Oxford Circus when she was called to audition for the part by casting director Amy Hubbard. “That was a Sunday evening, and it was my first day in London. Within two days, they had called back to say that I nailed the part… When I landed on set, we had four rained out days in Cape Town and there was nothing going on. So, for 36 hours, I binge watched the show to the point that I got paranoid when I’d walk the streets.”

Her experience on the show’s sets took her out of her comfort zone. “My first full film was The Lunchbox. Before that, I’d done a lot of ad films. So this is literally my second filming job, and from that perspective it was a lot to take on.” With Homeland, she was rubbing shoulders with some of the brightest minds in American television. “They’d call me ‘Taz-Mean’ on the sets because I am the one doing all the plotting!” Nimrat added her own nuances to the character—speaking the occasional Punjabi, for example, was her idea.

After five months of filming, she is now taking a breather from shuttling between Cape Town and Mumbai. Though she’s used to moving, having grown up as an Army kid, this is an altogether different kind of life. “My father was in the Army and so I grew up only speaking and living that vocabulary. Films and television were deemed a ‘bad influence’. You are trained to become an engineer, a doctor or a chartered accountant. But I was the exhibitionist in the family and I always wanted to be on stage.”

Nimrat Kaur remembers sitting on her father’s lap as a 10-year-old and asking him how heroines could change costumes so quickly. Her time with her father, however, was tragically short-lived. It has been over 20 years since that cold morning in Verinag in Kashmir when her father, the late Major Bhupender Singh SC, was abducted by the Hizb-ul-Mujahideen.

She remembers not wishing him goodbye that day; and four days later, on 21 January 1994, despite an operation to rescue him, he was brutally murdered. “It was not just about losing a parent. It was about losing him in such a violent way—to terrorism. As a kid, you don’t even understand why someone would do that. There is no closure. I still miss a father figure in my life.”

Nimrat, along with her mother and sister, moved to Noida soon after with a void that she says has only grown with time. “I was unable to really enjoy my childhood. I grew up too fast. I wasn’t in a place ever to make mistakes, bum around. It made me very contained. When you lose everything you know overnight, you become closed.”

In a roundabout way, it also left her a lot more sensitive to people around. “I’m a sponge. I’m able to grasp people’s emotions very easily. It comes from a place of knowing.” It’s perhaps why she could portray Ila, the loveless married woman who finds romance in food, with such remarkable empathy. “I never use my memories or my trauma directly while acting. But eventually, as an actor, it’s all about your life experiences. You can’t live in an untouched cocoon and then expect to recreate life when you’re acting,” she says.

She was 22 when she decided to move to Mumbai to pursue an acting career, but it took her a while to land a major role. After three years of doing only ad films and music videos, Nimrat felt like she’d hit a wall, which is when she turned to theatre. “The first play I watched was Cotton 56, Polyester 84, and I remember I was thoroughly bored. It was dark and too intelligent for me. But the next morning I remember thinking there was something in those moments on stage that I had to learn.”

She points towards a corner table where she met Sunil Shanbag, the man who taught her to walk on stage. “It was tough and at times pure evil to be in those rehearsal spaces. I would cry often. But in retrospect, I see how much it enriched me as a person.”

She went on to work with prolific theatre directors like Manav Kaul, even won the Mahindra Excellence in Theatre (Meta) award for Best Supporting Actress for her play Baghdad Wedding in 2012. “I would come back to theatre any day, but I need to work with people that excite me. Theatre is a marriage, it’s not a one-night stand.”

Today Nimrat is in a position to choose her roles. Of the 35 odd scripts she has been offered after The Lunchbox, the only one she officially signed was ‘Airlift’ with Akshay Kumar. “I’m fortunate to have been offered films by some very prolific filmmakers with really strong female characters in them. But I’ve realised that there is a math to this. When you are anticipated in the market, like a star kid is, and you are the right age, it’s easy to be cast in movies. In my case, I’ve literally been a bolt from the blue for people. I’m not a very easy person to cast in a mainstream commercial film. That’s why I feel actors like me have to be written in.”

Like the recent Titan Raga commercial, loved by viewers for the strong, single and independent woman she so beautifully portrays. “I think I have had more men responding to the ad than women, which is wonderful. The fact that the woman does not walk away in the end, and stays back to talk to the man, is I think the strongest point in the ad. It was about addressing the situation and not copping out.”

Refreshingly for an actor, she talks freely about her personal life. She’s 32 and single. “I’ve been with very progressive men, not just as lovers but even as friends. I feel if you begin with knowing that you are your own person, be it a man or a woman or someone inbetween, [someone with your own] sexual choices, professional choices, you don’t need to justify or apologise for them. Everybody around you adjusts to that.”

This year she will represent the country not just at the Bafta but also at the Screen Actors Guild awards, where Homeland has been nominated for Best Ensemble cast. It’s a feat few Indian actors can claim.

When Nimrat was born, someone said to her father, “Too bad, you’ve had a girl” and he responded, “Yeh, saat ladkon ke barabar hai. Dekhna yeh kya kar dikhayegi” (She’s the equivalent of seven boys, just watch what she’ll achieve). The words remind her to keep going.