Our Own (Recently Resurrected) Tarantino

Underrated most of his working life, Vijay Anand’s work is being referenced by a bunch of admirers like Anurag Kashyap, Imtiaz Ali, Sriram Raghavan, Sanjay Leela Bhansali and the Akhtars 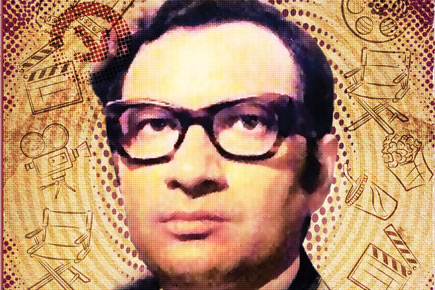 Underrated most of his working life, Vijay Anand’s work is being referenced by a bunch of admirers like Anurag Kashyap, Imtiaz Ali, Sriram Raghavan, Sanjay Leela Bhansali and the Akhtars


More than 50 years after he shot his earliest known, uncredited number, Aye Meri Topi Palat Ke Aa, in the Chetan Anand-directed Funtoosh, Vijay Anand has lost none of his validity as a filmmaker with the finest sense of music and song picturisation. “But Goldie…,” corrects Dev Anand, his elder brother, “was beyond that; he was much more dynamic and versatile. He was thinking big at a time when everyone else was confined to thinking small.”

Vijay’s all-round mastery over his medium has led to his sudden discovery among Bollywood’s young guns. Every time you read or hear Sriram Raghavan, Anurag Kashyap, Sudhir Mishra, Farhan and Zoya Akhtar, Imtiaz Ali and Vishal Bhardwaj talk reverentially about Vijay’s craft and technique, you realise the late filmmaker of classics like Guide, Kala Bazar, Johny Mera Naam, Teesri Manzil and Jewel Thief was—metaphorically—a Hitchcock-waiting-to-be-discovered. A forgotten genius, Alfred Hitchcock never won an Academy Award as a director and was swept away by his big-league contemporaries until the French New Wave’s leading lights recognised his exemplary talent and committed themselves to promote him like devotees. Let’s not forget it was Pablo Picasso who discovered the real genius of Henri Rousseau, the French painter who has now come to be known as a leader of a distinctive primitive movement.

Precisely the same seems to be happening to Vijay Anand’s reputation. His Guide, the meditative classic based on RK Narayan’s novel, has over the years cemented its position as possibly India’s greatest film of all time, an opinion held by many discerning film lovers. Powerhouses like Naseeruddin Shah, Aamir Khan, Shekhar Kapur and Mahesh Bhatt have often cited Guide as one of India’s finest movies. Vijay’s fame doesn’t rest on Guide alone though; his ingenious pop thrillers, Johny Mera Naam, Teesri Manzil and Jewel Thief and rom-coms like Tere Ghar Ke Samne have bolstered his standing as an artist with a vision all of his own.

The sort of influence he exerts on today’s young filmmakers is moving from formal deference to absolute devotion. Anurag says his next, the much-talked about Bombay Velvet, will be closer to Vijay’s films than any director’s. “Teesri Manzil is the biggest reference point for Bombay Velvet,” reveals Anurag, who first chanced upon Vijay’s work as an actor. “I saw him in Kora Kagaz and later realised he’s the same Vijay Anand who makes films,” laughs Anurag, adding, “His films hit me hard as a young man. What’s fascinating about him was that he directed, edited, wrote and did dialogue for his films, which made him an all-rounder.”

Anurag’s friend, and once part of a clique that hosted regular movie-soaked mehfils (gatherings) at Oshiwara in Mumbai, Sriram Raghavan could be partly credited for reviving Vijay’s pop noir style with his deeply personal homage, Johnny Gaddaar. Sriram and his screenwriter brother, Sridhar, have honed their craft watching Vijay’s films over and over again. “He is a mainstream filmmaker with a distinct personal style. He used the camera inventively to tell the story. There are scenes in Guide, Tere Mere Sapne and Teesri Manzil that are text books in shot-taking,” says Sriram, who believes he’s extending the legacy of Vijay’s pop thrillers.

Sriram was in “half pants” when he saw Johny Mera Naam, which inspired Johnny Gaddaar. “I saw it at Alpana Talkies, Pune, a 6 pm show. Kalyanji-Anandji’s pounding score perfectly set the tone and the blood-red titles had me glued. I think I fell in love with movies because of that film.”

Vijay’s skills in stylish shot-taking have made him the darling of unconventional filmmakers. His credit rolls and opening shots are incredible achievements for their time. The director begins Jewel Thief with a mysterious glove-covered hand reaching for gleaming jewels, and newspaper headlines screaming of a series of daring robberies, while in Teesri Manzil, he captures the shadow of a woman against a lit-up window. A boxing match in which the brothers Mohan and Sohan emerge joint winners, punctuated with the film’s dramatic, recurring theme music, forms the opening sequence of Johny Mera Naam.

The most beautiful opener, of course, is of Guide, in which the street-smart, Zauq-quoting, polyglot Raju is released from jail, and as he contemplates which path to embark on, Vijay’s camera parallels the protagonist’s situation by capturing birds flying away from a tree into the infinite skies. In another scene, he depicts the lovesick Raju resting under a bench on which two lovers are locked in a romantic embrace.

In Guide, Vijay is at the height of his power. Every scene is crammed with well etched symbolism, even the songs for that matter, as Sidharth Bhatia, who has authored a forthcoming book (yet untitled) on Navketan Films, points out. “In Aaj Phir Jeene Ki Tamanna Hai, you will see Waheeda Rehman on a truck breaking pots,” he says, “which signifies her new-found freedom, moving from a bad marriage to a new man in her life.” Most importantly, the pot is a typical Indian symbol—Vijay himself was a man steeped in Indian culture. “To understand Vijay,” says Bhatia, “is to first understand what he calls the ‘Navketan’ tradition, which is modern in its outlook.”

“His heroines weren’t becharis (helpless) but had strong personalities, and his films contained chatty dialogue which has become synonymous with modern cinema,” says Bhatia. What Vijay did, in the words of writer Akshat Verma (of Delhi Belly fame), is combine Western noir influences with a purely Indian sensibility. Dev Anand has often said that his training in films came from the 1950s Hollywood, which is true of Vijay too.

Akshat starts off with a confession: “I am such a big admirer that every time I go to Ketnav (a private theatre owned by Vijay in Mumbai) for a screening, I feel the power, the vibes of his cinema.” According to Verma, Vijay had a sharp sense of characterisation. “These char­acters have their own unique identi­ty. Then there were women characters that Vijay saab treated with aggressive confidence. He used music, mystery and motifs very well, with one eye al­ways on the pace—his films moved re­ally fast.”

“I would say, at least subconsciously, Delhi Belly is influenced by Vijay saab’s films in so far as the pace in the caper genre goes,” says Verma. “What I learnt from him is to tell a story, tell it sim­ply, and to keep it moving. When one is making a film in that genre, one doesn’t want the story to lie flat. His films nev­er had a dull scene or moment. A film must be such that if you take away just one scene, it falls.”

The imaginative ways in which Vijay shot his songs have become the greatest source of inspiration to rom-com makers, right from Kunal Kohli to Imtiaz Ali. Sanjay Leela Bhansali’s understanding of this tradition (start­ing from his songs in Vidhu Vinod Chopra’s 1942 A Love Story) can be traced back to Vijay’s films.

His contribution to song sequenc­es have set new highs that are impos­sible to achieve, believes Imtiaz Ali. “Every song bears his stamp. His work assumes greater significance because songs are central to Hindi films,” he says. “To my mind, he’s one of the top three song-takers of all time,” says Bhatia, adding, “His ideas for camera angles were marvellous. He shot Dil Ka Bhanwar Kare Pukar from Tere Ghar Ke Samne inside Qutub Minar, Delhi, from a top-to-bottom angle and vice-versa, which was a spectacular feat.”

Says Sriram, “Mile Do Badan from Blackmail is a unique situation where a song is playing in the middle of the cli­mactic action sequence. He used to find situations for songs.” Sriram believes that Vijay understood his material bet­ter because he was involved in vari­ous aspects of his job. “He used to edit [films] in his mind. Someday, I would like to shoot songs like him, or do a title sequence like Teesri Manzil or Chhupa Rustom, one of his less known films.”

Bhatia says although Vijay’s broth­ers were Westernised, educated and English-speaking, Vijay derived his ideas from India’s own culture. “Goldie didn’t want to do Guide at first. He felt the story wouldn’t appeal to Indians. He said he would not strictly go by the book. Those who have seen the English and Hindi versions of Guide—and there are very few who have, by the way—will know that Goldie understood his audience and the social fabric of our land extremely well.”

It’s disheartening that despite enjoy­ing commercial success in his career, Vijay’s reputation was not like that of his contemporaries: Guru Dutt, Raj Kapoor or Bimal Roy. Why wasn’t his work critically valued at the time?

Verma conjectures that if he were op­erating in the West, he would have ac­quired a Quentin Tarantino-like sta­tus by now. “While we drool over Tarantino and rightly so, what we don’t realise is that Vijay saab was assimilat­ing the pop culture references much before Tarantino came into the pic­ture. Tying sound with tone, mood and atmosphere, he was establishing our own pulp genre. In India we don’t have a healthy critical culture that recognis­es great talent. The media must write more about our legends.”

“Goldie didn’t get his due,” says Bhatia, “I suspect that’s partly because academic writers and reviewers were taken up with Guru Dutt and Bimal Roy. He was considered too much of an entertainer.” Adds Verma, “Fun is looked down upon in India. But Vijay saab also gave us Guide.”

Bear in mind the fact that Vijay lacked the tragic persona of Guru Dutt and cultural icon-like influence of Raj Kapoor. His life wasn’t poeticised, and his introvertish personality, reflected in the films he acted in, didn’t help in creating a legend around him. Towards the end of his career, he made glorious flops. “He went down, like everyone else does,” says Dev, “But let’s forget the bad pictures and remember the beauti­ful pictures.”