Of Home and Belonging

For a while now, a clutch of Indian photographers has been grasping at the idea of ‘home’. What their gaze alights on is not even always a physical space 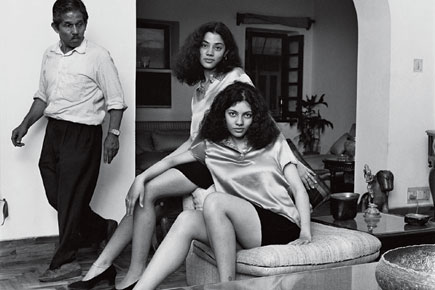 For a while now, a clutch of Indian photographers has been grasping at the idea of ‘home’. What their gaze alights on is not even always a physical space


For someone who as a child was working ten-hour shifts to pay his board and help his family in debtor’s prison, Charles Dickens got it pretty right. ‘Home is a name,’ he said. ‘A word, it is a strong one; stronger than a magician ever spoke, or spirit ever answered to, in the strongest conjuration.’ The crucial idea here is one of ‘conjuration’, the performance of something supernatural by means of a magic incantation or spell. Certain words in our language—love, death—possess that quality, and are able, better than abracadabra, to summon powerful, vice-like emotions, feelings that hold you in their grip. ‘Home’ most definitely is one of them.

It’s a word that holds within itself a lifetime of spaces, familiar rooms and faces, the immensity of childhood, the pain of loss, the freedom of rootlessness, and the security, no matter how fleeting, of belonging. It’s a theme as ripe for picking as a sun-drenched mango for many writers in the Indian Subcontinent, and more recently, for a clutch of photographers too.

For some, such as Dayanita Singh and Sooni Taraporevala, the focus was on documenting a way of life—people, rituals, spaces they were familiar with. An insider looking in, capturing intimate familial moments, exploring the castings of a community. Their similar interests and comfort within the confines of ‘home’ spring from their backgrounds—both come from families of keen photographers.

As Dayanita explains, “I could safely say that I came from the tradition  of  domestic photography, my mother an avid photographer and album maker. The home, the family, the interiority of life came naturally to me.” Her earlier works on the tabla maestro Zakir Hussain and the eunuch Mona Ahmed through the 1980s centered on constructing their lives around domestic spaces, at a time when professional photography rarely ventured into the domain of the family album. “I remember a senior photographer asking me why I needed to photograph Zakir Hussain sleeping or spend days living in his house when I could take my photos at a concert. I cannot imagine the work on Mona if it was all done on the street. Even the conversation changes when one is at home.” Her book Privacy (2003), ‘a return to the world from which she came’, consists of monochrome photographs of friends and their families ensconced in lavishly luxurious rooms decorated with various symbols of wealth and power—a stuffed lion, large oil paintings, heavy ornate furniture. An air of self-absorbed containment hangs heavy on the pages: on one, a passing servant is relegated to the corner of the frame. Interestingly, the book ends with photos of rooms emptied of their occupants: “At a certain time while photographing the theatre of family life, I realised that I could photograph people who inhabit a space without their being obviously present in the photograph, and this led to Empty Spaces (2001), to Chairs  (2005) and finally even to Blue Book (2009),” she says.

Sooni too “grew up with photographs and photographers in [her] family”. Her father Rumi Taraporevala and her granduncle Shahpur Taraporevala were adept at using their Rolleicords in the days before light meters. They also had a studio photographer in the family, Jehangir Tarapore, whose wonderful portraits, she says, “look as new as the day they were made—more than 70 years ago”. As a young student in the 1970s at Harvard, Sooni was desperately homesick. “Whenever I’d come home to Bombay, I’d take photos of everything and everyone—including my family.” In college, she put together a photo album from her family collection in three time periods: 1910-1930, 1930-1980 and then 1980-to the present (which were photos she’d taken). In 1982, Raghubir Singh, known for his documentary-style images of India, who was Sooni’s mentor, suggested she do a book on Parsis. “I was close to the subject, had unique access and it hadn’t been done before, and that’s how I began to document the world of Parsis outside my immediate family.” Apart from the quality of photos, this ‘unique access’ is what makes Parsis: The Zoroastrians of India (2000) such a stunning piece of work. The result of a 24-year labour of love, the book is an intricate, layered visual documentation of this dwindling community—exploring not just their lives at home, but also their religion and rituals, scholarly education, and the spaces they inhabit within the city. Something of the images’ poignancy is echoed in Prabuddha Dasgupta’s Edge of Faith (2009), a striking photographic exploration of the Portuguese-Catholic community—people restlessly caught in a time warp, trapped within the walls of old, decrepit houses.

Yet, ‘home’ as we all know can be a tricky, elusive thing, and Pablo Bartholomew’s recent exhibition Outside In: A Tale of 3 Cities shows us just how much. “So many places one can call home, and then none of them really qualify,” he says. “What can a double refugee’s kid really call home?” His father Richard Bartholomew fled to India during World War II to escape the Japanese invasion of Burma, and his mother Rati and her family were uprooted from East Pakistan during Partition. A Tale of 3 Cities touches on certain aspects of his ‘home(s)’. “At best, home could be the place one was born. So Delhi is a home, from where I always went somewhere else and returned to and now still continue to do so. But there was one city that I definitely did call ‘home’ or made it home while I could: Bombay. Calcutta has also been a home because of my mother’s Bengali ancestry.” The images are characteristic of Pablo’s work—raw, edgy, gritty, scraping the underbelly of urban living. He is also interested in other “searches for home” and looking at the migrant experiences of other people. His series The Émigrés focuses on Indians living in America, much the same way that Gauri Gill’s The Americans (2008) documents their negotiation of a traditional cultural heritage in a new environment. This seven-year project began with her photographing her own extended family when she went to the US to study as an undergraduate in 1992. “I found myself in this new world that was at once alien and deeply familiar, and started work on it. Much of the road map was provided by family and friends, and material that came from the larger community—vernacular newspapers, local desi websites, etcetera.” Gauri’s photographs, in full vibrant colour, capture how Indians navigate their “homeland” through attire, transport, domestic spaces. Her other series Notes from the Desert comprises photos drawn from more than ten years of visiting rural communities in Western Rajasthan, including Jogi nomads, Muslim migrants and Bishnoi peasants. “[It] is deeply personal—even though it may also engage with larger socio-political themes,” she says. These images, taken in textured black-and-white, erase the jewel colours of Rajasthan and help viewers focus on the people she has photographed. Her work is marked by an intense engagement with people and their lives, as can be seen in her series on Jannat, a young girl from rural Rajasthan who died and who the artist had known for eight years. The series is part of a group show Something I’ve Been Meaning to Tell You, curated by Sunil Gupta. The exhibition explores today’s rapidly changing family structures and the multiplicity and complexity of familial relationships.

Sometimes, home can be found in the most unusual of places, far from ethnic communities and even family. Dileep Prakash’s What was Home (2011), currently showing at PhotoInk Gallery, New Delhi, explores the spaces within 18 of India’s boarding schools, including his alma mater Mayo College, Ajmer, where he spent his formative years. “I developed special bonds with my peers, teachers and several members of the staff. It was only natural to consider Mayo ‘home away from home’. The bonds did not disappear once I graduated from school. There were, and still are, threads that join me to the school and the people I lived with.” These beautifully atmospheric images are similar to the emptied spaces of Dayanita’s works, albeit for different reasons. “This work is about memory—my memories about the spaces, how I related to them and the feelings they recalled. If I had photographed students, then the work would have been about them and not about how I remembered my experiences. So while there is an absence of people in my photographs, there is enough to suggest their presence. I photographed lived-in spaces.”

The question that remains is whether working on a series on home is in any way cathartic, or helps to untangle and clarify one’s feelings for that elusive space. Apart from Sooni, who says home, to her, is “Bombay, always and forever”, the others remain evasive.

For Dayanita it is “a place in my head, and the closest physical form I can attribute to it is my suitcase… if this suitcase is housed in a beloved friend’s home, regardless of geography, that place is home.” Gauri’s home is “many places” that she loves, for Dileep it is about “attachments to people, things and spaces… it is not rooted to a specific location at all times”. At the end of all our wanderings, home remains as indescribable as ever.