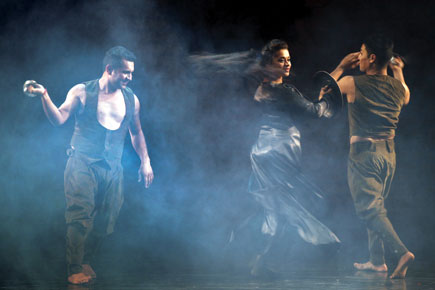 A scene from Ila—a play at the recently-concluded National School of Drama’s (NSD’s) Bharat Rang Mahotsav (BRM)—transitions from the pristine environs of Shiva-Parvati’s heavenly abode to a manic Mumbai local, in one split second. Ila is the mythical king from the Puranas cursed into a woman’s form by Shiva, only to slowly morph into manhood every full moon, and then back into womanhood every new moon. Ila’s world of shape- shifting gender boxes, finds an echo inside the ladies’ compartment of a Mumbai local that turns into a general one from 11 pm to 7 am every day.

Moving fluidly through eras, spaces and characters, this play by Mumbai’s Patchwork Ensemble is a playful comment on the idea that masculinity and femininity are nothing but two points along the same continuum. The ability to jump landscapes is crucial, says Puja Sarup, who along with Sheena Khalid has directed the play. “You can change landscapes, the weather. You can change anything. That is the beauty of theatre,” she says.

Change and fluidity—the cornerstones of theatre and performance— find themselves in a troubled relationship at the 18-day festival, which critics feel remains a place of stoic unchange. While BRM’s contributions to Indian theatre are undeniable—including the way it turns Delhi’s typically empty auditoriums into packed venues — there are issues of curation (or lack thereof), its centralised approach, and its token engagement with the contemporary.

This year’s festival—thermocol pillars and almost-art installations notwithstanding—titled Rediscovering the Magic of Theatre, brought together 82 plays in 23 languages, from 13 countries. NSD’s home productions took centrestage, including the opening act Macbeth in Manipuri by NSD Chairperson Ratan Thiyam. A spectacular production channelling his work with Theatre of the Roots, it stood alongside a host of forgettable productions by NSD’s repertory troupes. There was also the token Bollywood presence— such as Rakesh Bedi’s Mera Woh Matlab Nahi Tha—as well as refreshing contemporary work such as Jyoti Dogra’s Notes on Chai and Ila. In the absence of formalised curation, these plays stand uncomfortably next to each other, joined only by the weak, almost plaintive cry that theatre must be ‘rediscovered’. As if to say it is dying.

In its heyday, Mandi House—the cluster of government cultural institutions and art spaces near Delhi’s Connaught Place—was the centre of the arts in Delhi, and by extension, the country. The spaces—in keeping with traditional Indian arts—were also deeply interconnected and interdisciplinary. The Lalit Kala Akademi (the national academy for fine arts) and the Sangeet Natak Akademi are headquartered on the neighbouring Ferozshah Road. NSD (itself under the Ministry of Culture) was asked to house the BRM, says Amitesh Grover, assistant professor and artist who first saw BRM in its third edition during his student days at NSD. “The mandate was to create a self- sustaining team that would carry forward the legacy of the festival, separate from NSD. That it continues to stick to NSD reveals a failure in putting together such a team,” he says.

The application process for the festival follows a tender format: theatre troupes send DVDs of their plays, and experts view and select them. “This is not an exercise in curation, but collection,” says Abhilash Pillai, assistant professor, Design and Direction, at NSD, who has been part of the BRM technical committee in the past. In the absence of curation, a standardised, ‘Republic Day tableaux format’ has been arrived at over the years, which contains almost compulsorily a string of regional language productions, Hindi and Urdu plays, international productions by groups whose embassies are willing to sponsor them (since NSD doesn’t fund international travel), and a handful of experimental works, he adds. “This seems like an exercise in nation-building better suited to the 70s or 80s but simply redundant now. We are not intellectually using the autonomy of the NSD,” says Pillai who has helped curate the International Theatre Festival of Kerala in the past.

Another charge levied against NSD is that it is far too inward looking, giving preference to its own students. Sanjna Kapoor, theatre person and co-founder of Junoon, says, “For a brief period in the mid-2000s, this had changed with women such as Anuradha Kapur and Amal Allana in leadership roles. They brought incredible work from outside, such as Assam’s mobile theatre. The energy back then at the BRM was electric. After their retirement, the old issues have surfaced.”

‘Old issues’ seem to arise out of a centralised approach, one in which NSD sees itself as the centre of all. Kapoor cites the example of the inconvenient staggered ticketing rules, which make it difficult for audiences to engage and keep up with the festival. She says, “It’s like I’m not wanted as an audience member. Can theatre—already a difficult world to work in—survive without the patronage of its audience?”

Even in physical terms, says Pillai, the festival would benefit from extending its ambit beyond its present location. “We really need to disperse from Mandi House into the rest of the city. Let plays run for a week in a theatre in Laxmi Nagar where people don’t get to see much art, instead of a single show at Kamani. Or let a Malayalam play run for a few days in Mayur Vihar where there is a Malayalee community,” he says.

“This city has so many old houses, so many alternate areas for performance. Disperse performances all over, instead of having one big supermarket with everything in the centre of the city. At the moment BRM is not connected to the city—it just stays within Mandi House,” he says.

In the last two decades, an important shift has taken place across the arts: that of migration, of physical decentralisation. Contemporary art bodies have sprouted in different parts of Delhi such as Khoj in Khirkee Extension, Devi Art Foundation in Gurgaon, Kiran Nadar Museum of Art in Saket and Noida. Likewise, literature has found newer venues from the schmoozy literature festivals to independent book publishers and intimate book events and readings. “Theatre, too, has seen the emergence of various independent festivals—many of them in places like Thrissur (Kerala) and Begusarai (Bihar)—and smaller, independent venues and artistic spaces,” says Pillai. Zuleikha Chaudhari, former NSD student and visiting faculty member, adds, “The arts have had to migrate to other spaces because when you don’t fit in a space, you start to migrate to other places, other spaces.”

Chaudhari's latest work Rehearsing the Witness (2015)—a work that was staged at an art gallery in Mumbai—explores the intriguing case of Bhawal Kumar in 1900s Dhaka. He was the prince who was thought to be dead and then reappears after 15 years as a sannyasi (monk), leading to a long-drawn court case. Setting it in a gallery, as opposed to a theatre, was central to the idea of how the case would have played out. “If you’re there for the entire performance, which lasts the whole day, you see an intense version of it. If you’re there for a short while, you will get a part of it. It is really dependent on you as the audience because I am not trapping you,” she says. The idea of the exhibition is that, unlike a play, you are not stuck anywhere. The doors don’t close. This is also how classical performances such as Kathakali,work. People stay for a little while, go away and come back. Alternate venues—such as a gallery for a performance— opens up the possibilities of the way the work itself will take shape.

Theatre has gone beyond simply ‘telling a story’ or something that plays out on a proscenium with the emergence of work that is contemporary, multidisciplinary and experimental. Pillai’s work for instance compulsively tries to break the audience’s preconceived notions of what theatre should be. His 2005 work based on the Salman Rushdie novel Midnight’s Children, for instance, brought together technology and actors.

On the sixth day of BRM, a seminar on contemporary playwrights was held at NSD. Chaudhari and Grover, both attendees of the event, wondered out loud why prominent voices of this movement, such as Mumbai-based Ramu Ramanathan or Delhi-based Neel Chaudhuri were not part of the seminar. “Even the fact that they (the NSD establishment) are only beginning to acknowledge the contemporary theatre movement in India—which has really been on for about 20 years— is a case of too little, too late,” says Chaudhari.

“There appears to be a predominant fear of engaging and acknowledging the contemporary,” says playwright-director Neel Chaudhuri, who is also founder and artistic director, Tadpole Repertory. “Most importantly, the contemporary is not a particular thing. Even works of Kalidasa or Shakespeare can be contemporary. Contemporary is simply about the artist responding to an immediacy, reflecting on how people are living, how they are thinking, etcetera,” he says. “What the contemporary does is rearrange, reimagines. It allows influences from other art forms. It takes a discipline down from its pedestal. Look at how British contemporary theatre treats Shakespeare.”

On the other hand, when classical or folk is portrayed as an esoteric entity, fit only for the pedestal, it damages the art form. “This is a form of inverse arrogance— of distancing your audience from the art form to the extent that it is made to look like it’s dying,” he says. Chaudhuri’s own works have paid homage to the ‘pedestal’, such as Satyajit Ray—in his play Taramandal—and the German filmmaker Rainer Werner Fassbinder in his work Ich bin Fassbinder, a play about a playwright’s obsession with the artiste.

In a similar vein of the classical and the contemporary cohabiting the same space, a few years back, NSD alumnus Roysten Abel produced the arresting Manganiyar Seduction which used the visual landscape of Amsterdam’s red light district as a canvas for a concert by Manganiyars (Rajasthani folk musicians). The spectacular piece—neither folk concert, nor theatre, while simultaneously, both—premiered in 2008, and has toured the globe to packed auditoriums. In its very positioning as a seducer lay its rejection of it being a dying art form. It's alive, and in no need of being ‘discovered’.