Nothingness in a Dress

As a live installation at an art show against gender violence, Chinki Sinha finds herself discomfited by the male gaze 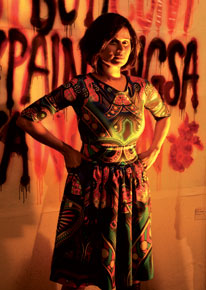 As a live installation at an art show against gender violence, Chinki Sinha finds herself discomfited by the male gaze


I was the ‘Painted and Dented’ woman in knee-high boots, a fitted Manish Arora outfit inspired by the neons of street graffiti, hands on my hips, my face turned upwards. My hair tussled, with glitter under my eyes, I was getting ready to be seen, measured up, and judged.

“More silver,” the stylist shouted. And a dab of glow powder was quickly plastered onto my cheeks. My lips were painted nude. Myna Mukherjee, curator of EnGendered Art Gallery in New Delhi, walked in and said “too pale”, and they painted it orange.

I submitted to them. My face as the canvas, my body as the hanger. I took a long breath and tried to forget the awkwardness of not being in control at EnGendered’s Resist project, an art protest by visual artists and designers against gender violence. I was a living, breathing and thinking canvas, a woman negotiating freedom, forever protecting herself, forever in the cage of her own body, careful always to cover it, but still being the non-conformist tackling questions of morality. For, these wild eyes had seen freedom.

I would represent a woman who, in Myna’s words, was ‘a utopian vision of what it would be like to not be restricted with expectations to conform… The installation I thought of was to have strong women warrior-like figures, that were both serene and stoic and graceful all at the same time. Women who could choose to be who they liked, could align multiple identities in harmony within themselves, as long as they were not interrupted by society’s expectations of them to conform to pre-determined roles’.

When a friend called to ask me to be this ‘live installation’, I wasn’t quite sure what they had in mind. But since all of us had been rattled by the gang-rape of a physiotherapy student in Delhi and by the general culture of gender violence, I said I’d come.

There were six of us. Barring a dancer and me, the others were young women, design students. A young man, who would depict androgyny along with a woman, was looking for a safety pin with which to fix an Arjun Saluja burkha sari. Gender is fluid, and in the years that I have interacted with members of the LGBT community, I have felt that clothes aren’t a manifestation of gender, that there is always a little bit of the other gender in us.

As I moved around the four floors, I considered the work on display: a meat installation titled ‘Between the altar and the butcher’, which recreated a butcher’s shop, complete with carcasses hung from the ceiling and blood on the floor. “The reference to the altar,” Myna explained, “has to do with the deification of women and their pedestalisation to the point that they can do nothing but fall. And the reference to meat has to do with the alarming rise of sexual objectification of women in popular culture and imagination. Male sexual harassment is a form of a patriarchal terrorism ingrained in our society, as a way of displaying masculinity almost. Women are treated like meat, they have little to no agency, and even in upwardly social strata are at best objects that are desirable to look at.”

Akanksha Sharma, a young fashion design student, would wear a voluminous off-shoulder evening gown and lounge on the bed, representing an ‘object of desire’. On yet another floor of this gallery in Delhi’s urban village of Shahpur Jat, a man and a woman would stand against the wall in black-and-white ensembles and challenge gender roles. The man would wear the sari, and the woman would wear trousers and a jacket.

The dancer, her face covered, would register her protest against the male gaze through her hands and feet, contorting her body to speak silently.

The curator had wanted the art to instigate and provoke reactions, and through live installations, create an interactive environment where the distance between the viewer and the artwork would be dissolved. Downstairs, she had Maya, a young slum girl, perched precariously on a tightrope.

She had found her in Kathputli Colony, a girl who was constantly trying to balance her reality with her aspirations. Myna had gone to that slum one night on an errand and found the streets full of men. After knocking on the doors of her tiny hovel, Maya’s mother finally opened the door. They had barricaded it from the inside with chairs and other furniture. It isn’t easy being a young woman in a slum. Maya attended a part-time vocational training school, and made a living through tightrope performances. ‘Toeing the Line’ was what she would represent: a lifetime of trying to strike a balance. Maya walked the rope, and became a symbol of women who brave the odds against them.

When Maya was introduced to us, she was nervous and restless. She sat quietly in a corner, and again tried to strike a balance between her reality and the discomfort she aroused in those who viewed her as ‘unsophisticated’. Like those who spoke about her outfit getting ruined because she sweat too much. Like those who came from more affluent backgrounds and didn’t understand the idea of her being there. But she was a girl in the city too. Like me, like the others.

I stood in front of Mithu Sen’s graffiti—‘a statement of her desire to not be boxed into a gender… ’—and tried to recall the times that I had been the Girl, Interrupted. In trying to break free, there were instances where I felt locked up in time and space, both frozen, pondering the next battle I’d have to wage to be free. In those hours at the gallery, I tried not to be conscious of the fact that while I’d be representing women who are judged for the choices they make, maybe I had judged them in the past as well because we have been conditioned to be condescending of those who dare.

There was a story I’d be telling. Of a woman, ‘painted and dented’, as President Pranab Mukherjee’s son had described those who’d turned up to protest the gang-rape. I had been outraged then. So, here in this space, on the roof of a gallery in an urban village, where most women conform to patriarchy, submit to male dominance, suffer abuse and hardly ever assert their rights, I would stand for hours in this version of a designer’s interpretation of a statement that had created a furore in the aftermath of the Delhi gang-rape last month.

I stood with another girl, dressed in a one-shoulder Satya Paul outfit. She was cold, and she was nervous in the spotlight on, but she stood her ground as spectators gathered around, taking photos, calling up their friends to tell them about the live installations. Even here, in this crowd, there were those who were excited by the presence of ‘live women’ painted and dented, and they would look at you in a way that makes you uncomfortable out on the streets of the city.

The men and women and children who lived in this urban village, mostly migrants, climbed on to their roofs to make sense of the spectacle. Only a certain kind of people ever enter art galleries. We were ‘safe’ here in our celebration of the freedom of choice. But what if we went out on the streets in our ‘painted and dented’ get-ups?

Illuminated, and eyes hovering over us, we were also photo props for those who insisted. They’d pose with us, ask us our names. A White man kept returning to the other human installation, asking her name, taking photos of her. She was quite young, and stood in the mayhem like a wax doll, stiff, not knowing how to respond. She later took out her phone and kept speaking into it. After a point, she asked the organiser for a shawl to throw around her shoulders. In my nipped-waist dress, I wondered if they, who came to view us as painted and dented women, got the point or irony of the situation.

What was the story I was telling? Of someone who had chosen to be single, work as a journalist, and travel to remote towns, to places considered unsafe for women, like brothels or the underbelly of a city. In this city which I had come to inhabit, for female desire to get any real airing, it would take an overhaul of so many things. But we all submitted that night to the idea of freedom, and of challenge. We became the art of protest. Standing there, I was finally at peace with my painted and dented version. After all, my body was mine, and there was ‘nothingness in a dress’, as graffiti artist Judith Supine had named one of his collages of a woman with a green face and bloated head, standing sideways. Everything is in the freedom to be.