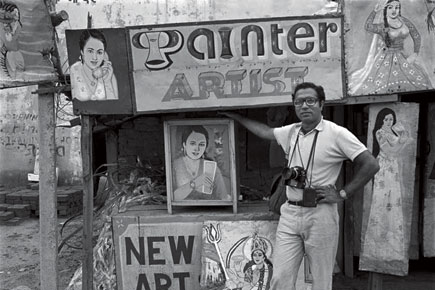 That artists crave criticism must be one of human civilisation’s oldest myths. And yet, the history of modernism is rife with instances of pointed critique received by one practitioner of art from another, however welcome or not it may have been. In the late 1960s, a young Indian photographer who grew up under the influence of the modernist canon received a two- word critique from an artistic giant. A high-school dropout, the debutant, after having failed to find employment in the still largely British-run tea industry, had sought refuge in the art of photography, using a camera he was gifted years ago, roaming the streets of Calcutta for about a month like a flâneur. By then he had developed a passion for photography, “so much so that my heartbeat ran an umbilical cord to my camera”, he would later recount. He showed his photographs to the legendary filmmaker Satyajit Ray, with whom he would evolve a deep and committed friendship. “No guts!” was Ray’s piercing declaration, made to another visitor as Raghubir Singh was taking his leave.

It’s difficult to fathom the jolt to the system this harsh reaction must have elicited, especially since 16 years after Singh’s untimely death at the age of 56, it seems like the one imaginative crime of which he doesn’t at all merit being accused. One could argue that the entire premise of his photographic opus lies in his daring, the decision to adopt the unpopular medium of colour, and in doing so, going against the then universally prevalent preference for black and white. So obsessed was he by the infinite spectrum of possibilities that lay in what he was convinced was the most poignant way India could truthfully be captured on film, he became one of the medium’s fiercest evangelists. It helped that Singh’s proclivities were not towards recording despondence or alienation. ‘My subject is never beauty as seen in abjection, but the lyric poetry inherent in the life of India: the high range of the colouratura of everyday India. Those delicious notes, those high and low notes, they do not exist in the Western world,’ he explained in the introductory essay of his seminal photo book, River of Colour, the 13th one published in his lifetime, in 1998, a year before his death. It is this unconventional fixation that curator Shanay Jhaveri dwells on in ‘Conversations with Colour’, an ongoing show at Mumbai’s Jhaveri Contemporary that aims at reminding us of Singh’s prescient facility with the format.

In Jhaveri’s opinion, Singh’s series of three colour photographs published in 1967 was what led him to realise “that the continuous reverberations between incident and figure within the rural and urban landscapes of the Subcontinent would be the central force of his work. Declared as his first successes, the images (Women in Monsoon Rains) show a group of village women on the banks of the Ganges, soaked to the bone, as the monsoon rain ‘whips their saris’, as he writes in an essay titled ‘Raghubir Singh and the Geographical Culture of India’.” Jhaveri describes the photograph, a framed print of which opens the show, as “the initial conduit into a body of work, vast in scope, and singular in its notice of the transformations taking place across a nation toward the end of the twentieth century.”

It was Singh’s firm belief that Indians know colour through intuition, while the West tries to know it through the mind. ‘If photography had been an Indian invention, I believe that seeing in colour would never have posed the theoretical or artistic problems perceived by Western photographers,’ he wrote, before recounting how Henri Cartier-Bresson, who exerted a huge influence on his practice, also condemned colour photography by privately using ‘unprintable French- army language,’ relegating it to the province of painting. The sense of embarrassment colour photography evoked for these seminal photographers, Singh proposed, was linked to their feeling of revulsion against its resident ‘emotional purge’. Their preference, he felt, was markedly in favour of the distancing quality inherent in black-and-white images.

Singh’s advocacy of colour seemed like an extension of his nationalist predisposition, which was further fuelled by his avid interest in Indian art, particularly the Mughal Miniature tradition that was fanned by his long friendship with Stuart Cary Welch, a scholar of the art form. ‘This friendship opened a window to the world of Indian art history,’ fellow photographer and friend Ram Rahman opined in his obituary in 1999 published in Frontline. An autodidact, Singh became deeply interested in art history, educating himself in Western and Asian art as well as the history of photography. ‘He could argue as easily about the merits and style of the Mughal painters Mansur and Basawan as those of the 19th century photographers in India, Linnaes Tripe and Felice Beato,’ wrote Rahman, who’d often hosted the Padma Shri awardee when he was visiting New York and New Delhi.

Artist John Baldessari, who wrote the text for A Way Into India, the posthumously published book of Singh’s photographs made using the bureaucratic Ambassador as both a metaphor and a vantage point from which to see contemporary India unfold, wrote of how Singh’s employment of colour ought to make some painters envious and how his shifts in space call to mind Velázquez. ‘He pits old against new. He makes gazes collide into a network of directional arrows—a constant ping-ponging. He uses light in a way that appears holy,’ he wrote, going on to qualify his juxtaposition of near and far as similar to that of Orson Welles.

Jhaveri’s attempt has been to enunciate how Singh’s photography is immersed in depicting the geographical culture of the Indian region. “His images project an intimacy, resulting not from having been born in India and receiving his basic education here, but also from a persistent mobility of the eye and person, waiting and moving between spaces and communities, as they themselves shift, uncovering patterns in the everyday that are slowly rendering the familiar unfamiliar,” he says. Singh’s chosen medium was 35 mm Kodachrome, which was fairly unattainable and couldn’t even be developed in India. ‘The big innovation he made was in understanding the lessons of the ‘street’ aesthetic— 35-mm camera with a fixed wide-angle lens, quick, almost snapshot-style shooting, using the full frame but applying it to colour,’ noted Rahman, excerpts of whose work, along with those of Sooni Taraporevala and Ketaki Sheth have also been included in the show to ostensibly open up the conversation as well as establish how Singh was the node that connected the three. Though Rahman insists Singh was more of a friend and fellow intellectual, Taraporevala and Sheth considered him their mentor. All three were part of a generation of photographers who, according to Jhaveri, “had the ability to be educated in the US and to have access to a wider spectrum of looking at material, a different kind of pedagogy.”

Like him, they too were embedded in the artistic and intellectual milieu of New York. Sheth was studying black- and-white photography at NYU when she first met Singh and slipped into the role of being his student. “While he would discuss his work and I would listen, he never once said that black- and-white is not the colour for India,” she said at a panel discussion between the three moderated by Jhaveri. “The kind of feedback I got was amazing. It was just him looking at the form of my pictures. He was absolutely perfect in that. Even though it was totally monochromatic.” Intriguingly, Sheth shot exclusively in black-and-white until two years ago, when she finally made her foray into the world of colour. A small suite of her new work, shot in Manori, her coastal hometown off Mumbai, shares the back of the wall featuring some of Singh’s prints. Taraporevala was similarly motivated to pursue photography because of her interaction with Singh in New York. In fact, it was he who egged her to focus squarely on documenting the Parsi community, of which she is a member, cajoling her into recording its people, rituals and culture over a 30- year period, eventually culminating in her seminal photo book, Parsis: The Zoroastrians of India. “When I first met him, I showed him a variety of black- and-white images. He zeroed in on pictures of my family. He immediately said I should concentrate on doing a book,” said Taraporevala, who firmly believes that Singh exists in every page of her hefty hardback, the physical copy of which he sadly never saw since it was published a year after his death.

Swapan Parekh, son of the late photojournalist Kishor Parekh, who was in the audience at the panel discussion held at Jnanapravaha, Mumbai, in August, felt it was important in the context of our increasingly digitalised world to emphasise Singh’s role as a skilled technician as one of the many qualities he possessed that distinguished him from his contemporaries. “He’s the only one who used flash as a narrative at a time when within photojournalism it was considered sacrilege,” he said, reminding us of another facet of Singh’s bravado. Rahman is convinced that had Singh been alive, he would have embraced the digital mode. “To see what the digital chip can do which film couldn’t do—he would have loved it.”

‘Conversations in Colour’ is an astute reminder of Singh’s visual and technical acuity and audacity. Still, while the 23 prints on display satisfy our collective desire to acquaint ourselves with his prints and the dense imagery they contain as well as their obsession with choreography, they leave us wanting more. Selected in consultation with Singh’s estate, run by his photographer wife Anne de Henning and their daughter Devika, from different bodies of work, the back room of the gallery allows the visitor the possibility of intimately engaging with the photographs, but its seeming separation from the work of Rahman, Taraporevala and Sheth on account of a dividing wall makes the conversation seem lopsided.

The reception to the show has been unprecedented, with the gallery reporting an unusually high visitor count, a testimony to the alluring quality of Singh’s visual paradigm. A selection of some of the photobooks he published in his lifetime accompanies the show, offering the viewer the rare opportunity to dip into the richness of his archive as well as the broad sweep of his gaze across the country’s geographical expanse.

Years later, Ray had forgotten about his stinging critique of Singh’s photographs. When he was reminded, he apparently ‘laughed and wished that remark away,’ so Singh tells us in his essay, ‘River of Colour: An Indian View’. By then his legacy was already in place. To what extent the accusation—“No guts!”—systematically altered Singh’s way of seeing as well as the scope and extent of his practice and his meticulous editing process one can only conjecture. What we know as fact is that in the course of just 30 years, the Jaipur-born photographer and intellectual who renounced his feudal background to live a nomadic life committed himself to the purpose of reinventing the way India could be photographed, and, in turn, transcended the limits of his medium.